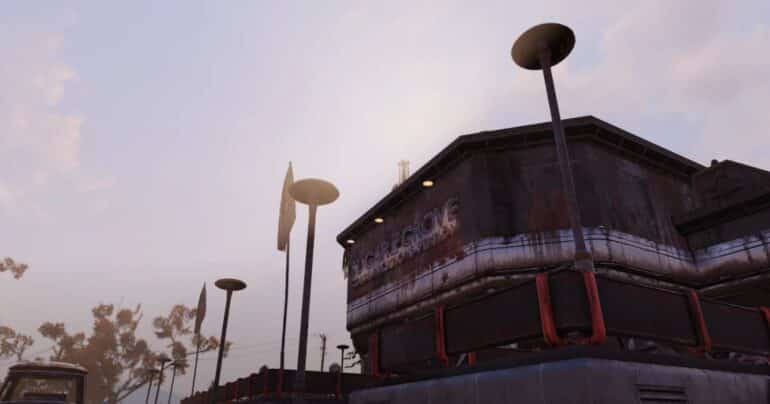 The Sugar Grove Fallout 76 location is a radio relay formerly used by the US navy to communicate with submarines submerged underwater. This is a locations players will have to go to upon doing the main story quest of the game. Learn more about the Sugar Grove in Fallout 76.

Sugar Grove is a landmark easily recognizable for its concrete walls and a massive bunker attached to an otherwise unsuspicious building. It can be found northeast of the West Tek Research Center on the side of a hill. There are plenty of worn down cars and even a limousine parked outside and there’s a crashed Vertibird on the roof of the building.

There are many entrances to the Sugar Grove Fallout 76 building. Players can enter it using the front door, but a terminal in the back near some bear-proof trash bins can also be hacked for access which requires no invested skills. Entering the back door however is a dead end as a key is required to enter a locked door. Players can climb a set of stairs and some ramps to reach the building’s rooftop where holes can be used to descend into the building below. The rooftop access is actually recommended as players will be able to get directly behind a turret facing the front entrance.

Players exploring Sugar Grove will be able to find workbenches and a Chem Station. There is an armor Workbench on the outside roof of the building and a Chem Station behind the main building next to a flight of stairs leading to the ramps that make way to the roof. Inside Sugar Grove itself, players can find a weapon and armor Workbench which makes improving equipment convenient as this location has plenty of usable materials.

Players are recommended to be at least level 32 if they plan to fully explore Sugar Grove. Enemies that linger outside are between level 5 to 10 which may give a false sense of security to the stronger enemies patrolling inside the main building. These are the enemies that guard the Sugar Grove Fallout 76 landmark:

Enemies inside range around level 20 to 25 which is a challenge for new players and those who come unprepared. The real test is against the Sugar Grove boss who is a level 30 to 32 Assaultron with a thick layer of armor.

Fighting inside the Sugar Grove facility can be rather tough. The corridors are tight and players will be encouraged to use medium to short ranged weapons. However engaging the Protectrons and Assaultrons without any cover is ill advised. Players should team up together to explore Sugar Cove.

Players will most likely first discover the Sugar Grove Fallout 76 facility after MODUS gives them the One of Us mission. At this point, you should have the Stealth Boy MK III which will help you sneak past most of the security patrolling the facility. But you can always go in guns blazing if that’s more your style.

Upon finding Sugar Cove, the best entrance is the rooftops. There are stairs near the Chem Station which will lead up to some ramps that can be crossed to get to the facility’s rooftop. There is a crashed Vertibird there and a hole that you can sneak through to get behind the Machinegun Turret MK 1 overlooking the front entrance.

After taking care of the Automatons and Mr. Handy, you can loot the main reception area before going through the load door. You only really need to interact with the terminal next to it to unlock the door giving you entrance. Once you enter the door, you’ll be met with an office area with hostile Protectrons patrolling it.

Head down the main hall and you’ll eventually reach a tight hallway. The second door to the left side has some stairs that will take you down to the command center below. There is a door that is locked behind a Skill: 1 lock. If you can unlock it, you’ll get rewarded with some crafting materials and the chance to disable the turret defenses using the terminal in the room. A hunting rifle could also potentially spawn in this location next to a broken computer.

Once you’ve gotten everything you needed, go back to the main hallway and continue till you reach the command center. You should check out the room on the left and right before heading down the stairs. There is an armor and weapon Workbenches on the left room that you can take advantage of next to a bunch of blank Holotapes. On the right, is a maze of data centers that you can go through which potentially holds an Endurance Vault-Tech Bobblehead at the end of it.

There should be a safe at the end of the maze which requires Skill: 2 to unlock. You could find a crossbow and bolts for it along with crafting materials if you can unlock. Once you’re done, head into the command center, there should be a steamer trunk that has good items. It can be random, but good armor or weapons should spawn for you to pick up.

The Sugar Grove Fallout 76 facility is hiding potential bobbleheads that give players a boost in gameplay. They’re always worth finding but they can spawn from multiple locations:

That’s our Sugar Grove Fallout 76 guide. We hope you found this article to be informative. Stay with us because we have more Fallout 76 content you’ll be interested in.

Check out this Youtube video from Oxhorn giving a very detailed presentation of the Sugar Grove Fallout 76 landmark.