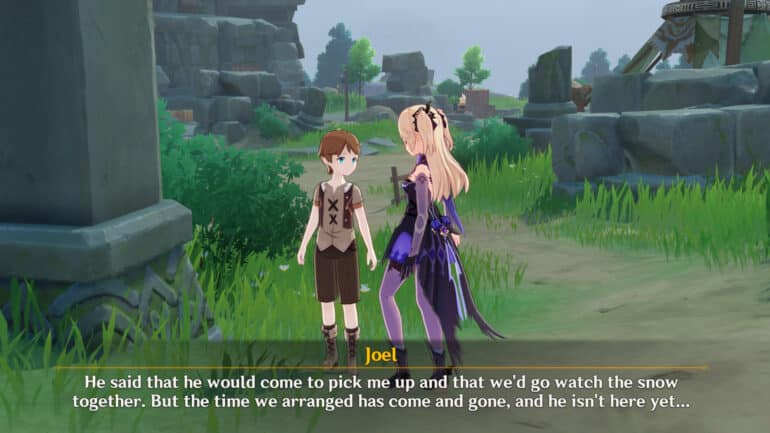 Genshin Impact has a lot of quests to enjoy from the main story, Story Quests, Character Arcs, World Quests, and more. The World Quests are especially easy to unlock as most of them do not need any Adventure Level requirement or anything else. These quests bring you to the different regions of Teyvat and this one brings you to the cold regions of Dragonspine.

Lost in the Snow is a World Quest that introduces a rather sad story of a boy looking for his father that might have gotten lost in the snowy mountain. You will also have to report back to him to share the sad news. Here is how you can solve this quest.

Genshin Impact Lost in the Snow – How to Unlock and Location

To locate the Lost in the Snow World Quest, players will need to head to the Adventurers’ Camp at the entrance of Dragonspine. Look for the little boy named Joel and talk to him. This will start the quest after answering his request.

Joel will be asking you to find his father that might have gotten lost in the snowy mountain Dragonspine.

Lost in the Snow Complete Walkthrough

After accepting Joel’s request, a marker will show up on your mini-map. Follow the path to the marker where you will find a camping site with three hilichurls in it. Defeat them in order to find some clues afterwards. Read the Neatly-Written Note nearby the tent to find a clue to where Joel’s father might be.

A new marker will pop up on the mini-map. Follow the path to the marker and on the way, you will be fighting a Frostarm Lawachurl. Finish that off to continue to the marker where a campsite can be found. On the second campsite, find another Neatly-Written Note.

The next campsite is rather close to the only Statue of the Seven in Dragonspine region. If you have unlocked it already, just teleport to the statue and just follow the path to the marker. Find the third campsite there and then read the Scribbled Note. The writer is rather worried about climbing the mountain and… you already know what happened to him with this note.

Now you will have to deliver the sad news to little boy Joel back at the Adventurer’s Camp. Talk to him and share the news (with a bit of a white lie).

At the third campsite, you will notice that there is a bowl where you can put in two Berries. There will be foxes that will eat those berries and will reward you with a rather hefty Treasure Chest with a Crimson Agate. Feed them for a couple of days to unlock this interesting reward.

Rewards for Completing the Quest

The rewards for this quest is rather hefty with a small amount of Primogems and a lot of Mora. Check out the list below:

And there you have it, a World Quest with a rather depressing story to be told. Hopefully this guide has helped you complete it without issues.

This quest is also a requirement to unlock the Shadows Amidst Snowstorms Event for Genshin Impact 2.3 update.

Check out our other guides of Genshin Impact to know more:

Also check out this helpful and awesome video for the Lost in the Snow Genshin Impact Quest Guide by MonkeyKingHero: