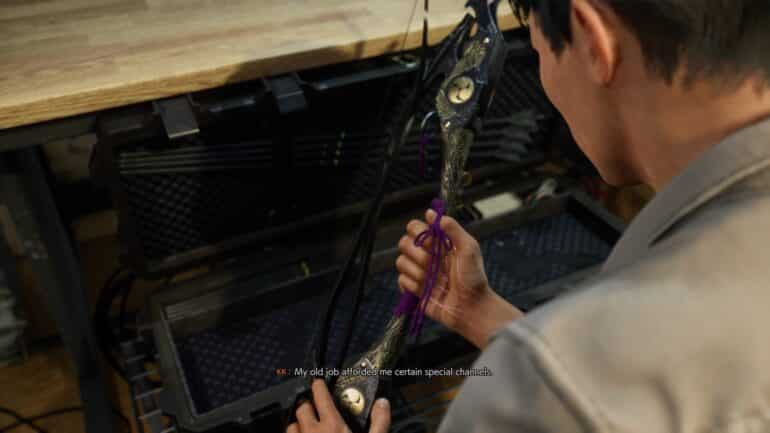 Dealing with the threats of Visitors in Ghostwire Tokyo needs a little more than just relying on Spirit powers, and that is exactly what the bow and arrow, talismans, and prayer beads are for.

You can’t always rely on Ethereal powers to get you out of every situation. In fact, there will be times when KK and Akito are going to be separated. When that happens, you’ll only have the bow and talismans to protect yourself until you are both reunited.

All Equipment in Ghostwire Tokyo

Using the bow allows you to quietly defeat Visitors from afar without being spotted. Headshots are especially effective.

Here’s how to use the Bow and Arrow in Ghostwire Tokyo:

Arrows are affected by gravity, so be sure to aim a little high depending on the distance.

There are two branches to bow and arrow upgrades:

Katashiro are paper dolls that are used to absorb spirits. You can buy more to increase your hold capacity by buying them from convenience stores or getting them as rewards from missions.

How to use Katashiro

To use Katashiro, hold (L2) to absorb the spirits you come across throughout Shibuya. You can bring absorbed spirits to a phone booth to transfer them to safety.

Spirit Absorption – Speed Boost: While this doesn’t upgrade the Katashiro itself, this ability upgrade speeds up the rate at which spirits are transferred into the Katashiro.

Special devices are scattered throughout Shibuya, hidden inside ordinary telephone booths. These are actually machines that transport the spirits you’ve absorbed with katashiro to safety outside of the barrier.

A friend of KK’s named Ed awaits their arrival and will help them become living humans once more. The more spirits you send, the more XP you’ll be rewarded with, so try to save as many of them as you can.

Talismans can be thrown at enemies or on the ground to trigger an array of effects that aid in battle. Talisman effects vary and include effects like temporarily freezing enemies in place, summoning thickets that obstruct their view, and more. Talismans can only be used once and disappear once thrown and activated.

Stun talismans immobilize nearly Visitors within their range for a short period of time when thrown. However, certain powerful Visitors are immune to this effect, so be cautious when using them. The talisman stays on the ground for a period of time, making it a good zoning tool.

Thicket talismans summon shrubs that obstruct a Visitor’s line of sight when thrown. These bushes make for perfect hiding places to sneak around undetected. This is especially useful when trying to evade powerful Visitors or for setting up an ambush for a quick purge.

Decoy talismans make a loud noise on impact when thrown, which will lure nearby Visitors towards them. A good distraction tool that’s only useful if enemies are unaware.

Exposure to talismans makes it easier to expose the cores of nearby Visitors hit by the effect. The most expensive talisman beside the stun talisman. Be careful not to overuse and break your bank.

Wearing prayer beads enhances Akito’s abilities. Acquiring multiple prayer beads of the same kind will level them up and enhances their power.

How to Fight Solo in Ghostwire Tokyo

When Akito is separated from KK, any actions that rely on spiritual energy are severely limited. Akito will be unable to perform Ethereal Weaving techniques in combat, and some other movements and investigative abilities become similarly unusable.

However, Akito won’t be left totally defenseless when working solo on the streets of Shibuya.

He can still make use of talismans to buy yourself time to either run away or put yourself into a position to comfortably rain down arrows. Against unaware enemies, you can still use Quick Purge to quietly dispose of them.

On a final note, Akito separated from KK does not remove his ability to absorb spirits using Katashiro.

And that’s all there is to all Ghostwire Tokyo equipment. I hope this guide has at least informed you of a few things about them.