How to beat Leshy in Cult of The Lamb: Boss Fight Guide

How To Beat Leshy in Cult Of The Lamb 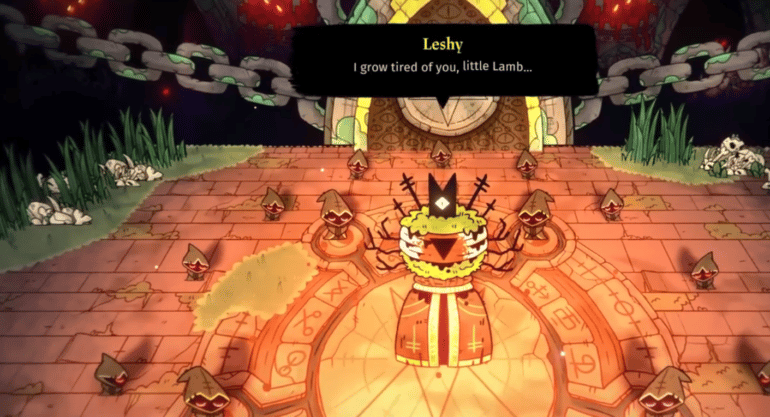 In Cult of The Lamb, there are bosses known as Bishops. These bosses have their own territory and can be found in different regions of the map when doing a Crusade. Here in this guide, we will feature how to defeat the final boss of the Darkwood region known as Leshy.

Leshy is the final enemy in the Darkwood region and is considered the 1st boss encounter in the game. He has the ability to summon allies that will ensure his lack of defense and can be used as fodder to ensure a summon ritual will go smoothly.

How to Defeat Leshy in Cult of The Lamb

During an attack, Leshy will tend to hide underground and will target you where your position is. Best to perform a dodge roll to avoid being by spikes summoned underground. Sometimes it’s unavoidable to dodge, so a couple of hits will be taken once Leshy resurfaces from underground.

Leshy will often summon a wave of spikes when he resurfaces so the most effective solution is to run towards an opening made by the wave or do a dodge roll. There will be times that Leshy will summon projectiles to ensure no closure will occur so best to get out of the range of the projectiles’ attacks as quickly as possible.

When his health gets low, things will get even more dangerous as he will be doing a head-banging move in which he will do a face slam down on the ground when getting close to him. Quickly escape or else, a great amount of damage will occur to you.

Rewards in Defeating Leshy in Cult of The Lamb

When Leshy is finally defeated, not only have you conquered the Blackwood region but players will receive the Heart of a Heretic. This item can be used to unlock one of four powerful Crown Upgrades. Additionally, you’ll unlock a blueprint for a commemorative statue of Leshy you can build back at your Cult’s village.

Check out this video walkthrough made by ZackScottGames on his Cult of the Lamb Gameplay Walkthrough Leshy Boss Fight!

Cult of the Lamb is now available to play on the Nintendo Switch, PlayStation 4, Xbox One, PlayStation 5 & PC via Steam. For more Cult Of The Lamb guides: