A complete guide to LEGO Star Wars The Skywalker Saga All Minikit Locations in Episode 3: Revenge of the Sith. 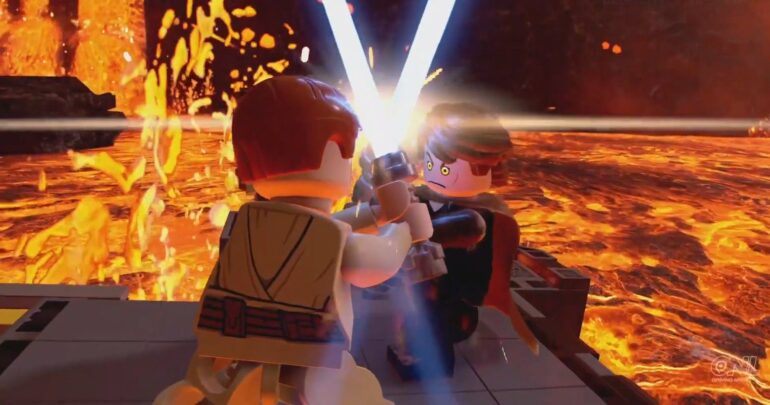 This guide will show you where to find all LEGO Star Wars: The Skywalker Saga Episode 3: Revenge of the Sith minikit locations. Minikits can be challenging to locate since some of them can be hidden really well in LEGO Star Wars: The Skywalker Saga. They are worth it to find though as collecting all five in each level rewards you with a ship to use in free play mode.

If you’re having some challenges finding specific minikits, you can always opt to buy a “Rumor” which will cost 30,000 studs each for a hint of where to find the location. The price does sound expensive, but it can be minimized depending on the upgrades you’ve purchased.

But in this guide, we’ve laid out where to find every minikit so you don’t have to go through the hassle of looking for each one. There are a total of 25 minikits that can be unlocked in Episode 3: Revenge of the Sith:

Out For the Count

Go to the bottom of the map where you’ll need to switch to a character who can use explosives to break down the door. Then switch to C3PO to use the terminal on the left side to gain access to a room full of droids and mechanical arms. Head inside and destroy the droids then you can rebuild the parts into this minikit.

Rumor: “There is more than droid parts in the droid repair room! They should rename it to “Droid Repair Room+”.”

We’re Smarter Than This minikit

Get out of the room full of droids and head on down the corridor to your left. Before you get to the laser gate, there should be a room to your left which requires an android character to access. After getting inside, switch to a Jedi character and use the force on the three levers to get this minikit.

Rumor: “There’s something off about that minikit… It might be a trap.”

It Lay Beyond Lasers minikit

Exit the room and head to the laser gate. You can create a platform to get over it by moving around one of the big boxes which you can use to leap over. After you’ve taken the jump, head right and destroy some items in the corner of the room to find this minikit.

Rumor: “Only droids can open the store room. Start a commotion and see what happens!”

After you’ve gone through the second set of laser gates, head left where to a room where you can find more droids in. After you’ve defeated the droids, use a Jedi character to cut through the door on the right side of the room. Get inside the control room, dispatch the droids, and then use a character with explosives to blow apart a steel case with some bricks inside. Rebuild these bricks into a lever and activate it before heading back out into the room on the opposite side of the corridor. Take control an android character to release a second lever and get your minikit.

Rumor: “That General Grievous statue looks like it’s missing something…”

Just before you meet Chancellor Palpatine, there is a corridor to the left of the room you’re in where a statue General Grievous lies. Take control of a Jedi character to use the Force to equip the statue with four lightsabers. A hidden compartment with this minikit will open up.

Rumor: “The area behind those faulty lasers looks interesting…”

After getting all Out For the Count minikits, you’ll get the “Jedi Interceptor” as a reward.

At the beginning of the level in the hangar area, look out to the battling droids. Look towards the left of the air vent opening and you’ll be able to see something you can use your scavenger character’s net on. Shoot your net and then climb above. You’ll need to switch to an Imperial character before you destroy the TIE fighter that gives you the access to the command console. You can then rebuild the bricks into this minikit.

Head back out once again into the area with the battling droids and then turn around. You should see a rebel command console. Switch to a rebel character to use the command console and then switch again to a Jedi before you climb the structure and then use the zip line at the top to get to another platform with this minikit you can grab.

Rumor: “The direction the clone troopers swopped in from is interesting…”

Go back to the rebel command console and then look behind it. You’re looking for an anti-air turret which you need to use to take down five aircraft. You’ll then be given this minikit for your troubles.

Rumor: “Vulture droids outside the base are overwhelming the clone troopers!”

Go back to the hangar again and walk along the platform before dropping below to a lower platform to the right. Take control of a Jedi character and use a lightsaber to cut a hole in the door. Once done, destroy everything inside to get this minikit.

Rumor: “Use your lightsaber to cut through the facility walls!”

Go to the top left of the map and run along until you reach the end of a long corridor. Switch to a droid character to complete the puzzle and you’ll get this minikit.

After getting all So Uncivilized minikits, you’ll get the “Vulture Droid” as a reward.

At the beginning of the level, there is a command console on the left you can access covered in leaves you can destroy. Using that command console will unlock the door to the left which will lead you to a gold container. You will need to switch to a character with a strong enough blaster to break open the golden container which will reveal an energy cell. Switch to a Jedi character to use the Force to move the energy cell to the satellite dish on the roof of the other tree hut across you. An aircraft will then deliver this minikit to your location.

Rumor: “Find a way to power up the satellite dish and call for supplies!”

Destroy three steel beacons after the clone assault cutscene to get this minikit. You can do this by chucking grenades at them.

Rumor: “Kashyyyk is filled with trees with all sorts of wildlife and hidden artifacts…”

In the same area where you have to destroy three steel beacons, take control of an Imperial character and look for a red weapons crate that is located near the wall. Open the crate and take the rocket launcher inside. You’re going to use it to bring down a tree to your right to get to this minikit.

Rumor: “Take advantage of the gear found in weapons crates!”

Use the pieces of a destroyed ship from the tree to build yourself a platform you can use to climb up to a new area. Once you’re above, switch to a Jedi character and stick as close as you can to the right side of the wall. You need to find the point where you can use to wall run to the ledge you can grab to jump above to a higher ground. This minikit is hidden behind a bunch of leaves.

Rumor: “Drink in the wonderful views from high in the mountains of Kashyyyk!”

Go to back of the map in the area where you do your final goal. You’ll have to jump down below to the north of your compass where you won’t actually fall to your doom. You’ll be able to see this minikit at the bottom where you can use the notches to descend towards.

After getting all Droid Attack on the Wookiees minikits, you’ll get the “ARC-170 Starfighter” as a reward.

You have to destroy a desk inside a room with two chairs at the bottom of the room in the very beginning of the level. Then rebuild the parts into this minikit.

Rumor: “Someone must really hate their desk…”

There are two levers high up on both sides of Darth Sidious in the same room where you destroy the desk to build this minikit. Use both your characters to simultaneously switch the levers and the minikit will appear in the center of the room.

Rumor: “Look for alternative ways to distract Palpatine in his office.”

Shoot down the five floating droids inside the senate hall to get this minikit.

Hang off a ledge in the senate hall to maneuver to where you can pick up this minikit.

Rumor: “Manipulate the senate platform. Hold on to something!”

Climb to the highest platform in the senate hall and then switch to a scavenger character. Use the glider to fly over to the platform where this minikit is.

Rumor: “Find a means to cross the platforms in the senate chamber.”

After getting all Senate Showdown minikits, you’ll get the “V-wing” as a reward.

In the beginning of the stage after Anakin runs away on the first fight, go to the south of the map behind the cruiser where you can see this minikit across a gap. You need to smash the equipment around to build a ramp you can use to get across and grab it.

Rumor: “Those P-100 droids are holding something familiar!”

Switch to a character with a grapple and go north on the left side of the cruiser you arrived in at the beginning of the level. You will see a ledge you can use to grapple and maneuver around to a hidden area where you’ll find a golden container behind the large contraption. Destroy it with a blaster and rebuild the parts into this minikit.

Rumor: “Don’t hang around too long to find this one.“

Once you’ve arrived in the control room in a fight against Anakin, switch to Chewbacca to destroy the purple tubes surrounding the table Anakin is standing on top of. You can then rebuild these into switches and use two of your characters to press them down simultaneously. You’ll get a small cutscene of holograms fighting walking around and then this minikit will spawn in the center of the table.

Rumor: “There is something different about this holotable. It seems… minikit-ier than normal.”

In the control room where you fight Anakin filled with holographic tables there is a Imperial command console to the east.. Go there and then switch to an Imperial character so you can use it. Go inside the room next where you’ll need to use explosives to blow up the steel casing on the right where you can find energy cores. Pick up an energy core and move it across the room where you can find an empty slot to put it in to the left side of the band. They will start playing music and this minikit will spawn directly in front of them.

Rumor: “The band needs help setting up! Where’s a roadie when you need one?”

In your final fight with Anakin, you’ll need to use a character to jump off of the southernmost platform and a jump again some steps to get to the minikit. Make sure not to finish off Anakin too early.

Rumor: “Just don’t look down at the lava…”

After getting all The High Ground minikits, you’ll get “J-type Star Skiff” as a reward.

That’s it for LEGO Star Wars The Skywalker Saga All Minikit Locations in Episode 3: Revenge of the Sith. You can check out our other LEGO Star Wars guides you might be interested in.

Check out this Youtube video from Gaming with Abyss where they show how to complete every challenge and collect all minikits in The High Ground level in one go.