A complete guide to LEGO Star Wars The Skywalker Saga All Minikit Locations in Episode 5: The Empire Strikes Back. 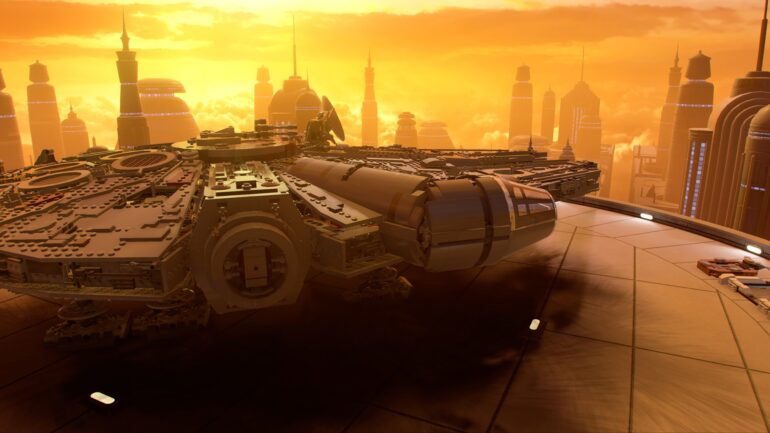 This guide will show you where to find all LEGO Star Wars: The Skywalker Saga Episode 5: The Empire Strikes Back minikit locations. Minikits can be challenging to locate since some of them can be hidden really well in LEGO Star Wars: The Skywalker Saga. They are worth it to find though as collecting all five in each level rewards you with a ship to use in free play mode.

You can also buy a “Rumor” from your holoprojector if you’re having a hard time looking for a specific minikit. Rumors cost 30,000 studs each which can be costly but you can lower the price with the right upgrades.

However this guide will show you where to find every minikit so you don’t have to go through the hassle of looking for each one. There are 25 minikits in Episode 5: The Empire Strikes Back.

Up to Snow Good minikit

Rumor: “Did the probe droids build those snowmen…? They’re LEARNING…”

Rumor: “What happens if you shoot a P-Tower turret with another P-Tower? Let’s find out…”

Snow Friends of Mine minikit

Destroy 5 snowmen made up of various LEGO characters located around the area to get this minikit.

In the north side of the area, use a generator which will power up a ship. Enter the ship and use its lasers to blow up the giant ice on the left. You can then exit the ship and rebuild the debris you just blew up into this minikit.

Rumor: “There must be a way to thaw out that frozen minikit by the snowspeeder…”

In the east side of the map, you can build a magnet which will attract a floating droid to you carrying a power cell. Take the battery and insert it into one of the cages containing this minikit nearby.

After getting all Hoth and Cold minikits, you’ll get “GR-75 Medium Transport” as a reward.

Assault on Echo Base

At the beginning of the level head right and go underneath through a small cave. This minikit is just floating by.

Rumor: “Luke wasn’t the only thing left alone in the snow…”

Did Somebody Order Ice? minikit

After obtaining the Snowed Under minikit, keep an eye out for this minikit, which is located immediately to the right. If you look closely, you should see a little snow pile. Blast the snow with your guns to expose this minikit, then fly over and grab the minikit.

Rumor: “The prize is all yours; you just need to thaw it out!”

As soon as you return to the battlefield, your priority should be to take down the AT-STs before turning your attention to the AT-ATs. This Minikit can only be obtained by destroying six AT-STs. If you don’t get them all in this region, they’ll keep respawning later in the level, making it impossible to finish this mission. There is a snow pile on the right side before you get to the AT-AT. Shoot it and fly over to get this minikit.

Rumor: “There is a lot of ice around here… Some of it must be hiding valuables!”

Once you’re at the AT-AT take a sharp right and keep heading forward until you see a cave. Fly through to get this minikit just floating by.

Rumor: “Sometimes these things are just lying around! Keep your eyes peeled.”

Destroy 6 of the droid vehicles wandering around to get this minikit. They’re white droids on wheels.

Rumor: “These sneaky Empire droids are still surrounding the area. Deal with them!”

After getting all Assault on Echo Base minikits, you’ll get “Imperial Star Destroyer” as a reward.

Never Tell Me The Odds

In the asteroid field, destroy five space debris floating around. They aren’t asteroids and you’ll notice them due to their more square and blocky shape. You’ll get this minikit after destroying five of them.

They Can’t Have Disappeared minikit

Go behind the back of the Star Destroyer. You can find this minikit on the upper portion of the spacecraft.

Replay the level in free play and earn gold in the race to get this minikit. You need to complete the race under 32 seconds.

Rumor: “Race against the clock!”

Keep your eyes open in the asteroid field for this minikit just floating around.

Rumor: “Only a skilled pilot can reach this one!”

Just after the cutscene where you’re placed into a large asteroid being chased down by the Empire, there is this minikit on the lower left section.

After getting all Never Tell Me The Odds minikits, you’ll get the “Imperial TIE Bomber” as a reward.

Switch to R2D2 and go to the southeast corner of the map. You’ll find a terminal you have to solve that opens up a room full of power cells. Head inside and go right and pull the contraption down to reveal a power cell. Take this power cell and add it to the collection behind you. The machine will open up the ceiling and this minikit will drop down.

Rumor: “An astromech could slice its way into the small systems room…”

Rumor: “Looks like the dining room is locked up tight. The entry code must be nearby…”

Head left outside the dining room and go into the hallway where two Stormtroopers are having a chat. To the right there is a console you can use. Switch as C3PO and interact with it to activate and take control of a droid who can open up the doors to the furnace. Break the objects on the right and rebuild it as a contraption. Shoot the big obstacle that’s blocking the items to the furnace. Once the junk go in, this minikit will pop out of the furnace.

Rumor: “That pit droid could probably get you into the furnace room…”

Head out the furnace and take two right turns then the soonest left. You should see a maintenance crew along the way and a pile of junk that’s with them. Destroy the junk and rebuild them into machines. A cutscene will appear where Stormtroopers appear and play with the machines you built. Head the way they came and take a left turn. There will be a terminal you can use as Bail Organa which will give you a box. Push the box to the other end and the window will flip to give you this minikit.

Rumor: “The stormtroopers are distracted… Now’s your chance to snag that minikit!”

In the room with an Imperial officer in the middle with several Stormtroopers coming from the elevators, switch to a character with a grapple at the switch above the broken lift. This will pull it down and the broken elevator in the middle will open up. Walk up to it to get your minikit.

Rumor: “The override lever for lifts are usually found high up inside them!”

After getting all Hibernation Station minikits, you’ll get “Boba Fett’s Starship” as a reward.

After chasing Vader through a tube, you’ll arrive in a room with a switch. Pull the switch and the carbon freeze contraption to the right will do something. The hole from the ground will spit out this minikit.

Rumor: “Test out the carbon freeze equipment for yourself.”

Go through one of the tubes again after cutting a hole from to activate a switch that opens up another tube tunnel. Switch to R2D2 and go through the tunnel. You’ll arrive in a room with the center tube tunnel to the left having a hatch you can pull down. Pull it down and this minikit will fall. You can go ahead an pick it up.

In what seems to be a control room you enter where you can hear Darth Vader’s breathing, switch to C3PO and access the terminal to the left. This will reveal this minikit at the center of the room which you can go ahead and pick up.

Rumor: “Some games require a password to gain entry. Fancy!”

In Case of Emergency minikit

After the cutscene where you’re thrown out the window, pick yourself up and head left. There is a Hero terminal you can use which opens up a compartment that has this minikit.

Rumor: “Rebels are quite resourceful when they need to be…”

Walk along side the edge after the cutscene where you’re thrown out of the window until you reach a hallway where you hear Vader’s breathing again. Keep walking and you should see a button to the right. Press it and it’ll open the door to a room dedicated to Lando and his capes. Destroy the photo and this minikit is inside.

After getting all Revelations minikits, you’ll get the “Rebel X-wing” as a reward.

That’s all the minikits you can find in LEGO Star Wars: The Skywalker Saga Episode 5: The Empire Strikes Back. If this guide really helped you out, check out our other LEGO Star Wars content.

Check out this Youtube video from Gaming with Abyss which shows you how to complete all the challenges and where to find the minikits in the Revelations level.