A complete guide to LEGO Star Wars The Skywalker Saga All Minikit Locations in Episode 4: A New Hope. 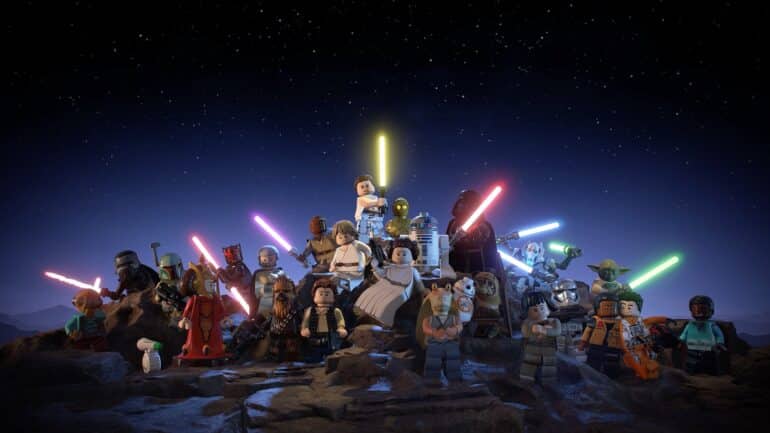 If you’re having trouble finding a specific minikit, you can always buy a “Rumor” through your holoprojector. Rumors each cost 30,000 studs but the price can be lowered with the right upgrades.

But this guide will show you where to find every minikit so you don’t have to go through the hassle of looking for each one. There are a grand total of 25 minikits in Episode IV: A New Hope.

In a room separated by a glass where you can see Darth Vader walking on the other side, there is a door that can be opened by a Force-sensitive character. You’ll have to jump down the hole and get past the lightning traps to get to this minikit at the end of the hallway.

Rumor: “Show off your acrobatic abilities for a special reward!”

After you’ve used the hologram platform to open a door, there will be Stormtroopers who will break through on the door to the left. Inside that door, you’ll find four buttons which you’ll have to press simultaneously in order to acquire the minikit. Use a Force-sensitive character to bring objects to press the other two buttons and use your two characters to press the other two. This will give you this minikit.

Rumor: “The cleaners must have been in a rush to finish…”

In the disco party room found before meeting R2D2, you can use Mind Tricks to force everyone to start dancing. Parts will appear that allow you to build this minikit.

Rumor: “Time for a dance break!”

Just before you exit the level, the last minikit can be found in the escape pod. You’ll have to build this minikit yourself after destroying all the clutter.

Rumor: “Grab a couple of gonks for free entry!”

The first minikit requires you to find four creatures inside the ship called “Supercounters” which are these bat-like creatures. Once you’ve destroyed all four, you get this minikit.

Rumor: “How did these mynocks get on board? Somebody do something!”

After getting all Boarding Party minikits, you’ll get “Tantive IV Escape Pod” as a reward.

Once you’ve attached the satellite dish to the Millennium Falcon, several of the rooms in the upper level will open up. The room to the west will have this minikit.

Rumor: “See anything good up there?”

There is a Villain Terminal in the northwest of the level which unlocks a garage with a Gonk droid. Ride the Gonk droid to the northeast garage and park it next to the conveyor belt. The contraption with the conveyor belt will crush some parts which will give off parts that you can build into this minikit.

Rumor: “Any lost belongings must be retrieved and processed.”

In the north there is a Hero Terminal hidden behind some objects you can destroy which unlocks another garage where you’ll find two crates that you need to push near the mechanical arms in order to spawn this minikit.

Rumor: “Found within a hidden stash of valuable resources…”

In the upper area of the level you can find a room with four boxes to the north. You can smash these boxes and they’ll form the parts you need to build your own minikit.

Rumor: “You never know what you’ll find when you shove some boxes around!”

Look for the garage where Stormtroopers appear in the southwest of the area. Use a scavenger character in this to launch a net upwards and climb up to reach this minikit.

Rumor: “Exits can be found on the first floor! Did that minikit try to make a break for it…?”

After getting all Hunk of Junk minikits, you’ll get the “Millennium Falcon” as a reward.

This minikit requires that you destroy three Mouse Droids roaming the level.

Rumor: “These mouse droids are such a pest…”

Do You Mind? minikit

You have to trick the crew using the fake Darth Vader and using the lift and take the door to the right and find this minikit inside.

Rumor: “Find out what the Emperor is up to… Then regret it.”

In the area with a zipline ledge where you find the second mouse, you can build a Glider using a Scavenger which will allow you to reach to a lower level where you can find this minikit. Or just drop down directly below from the upper floor.

Rumor: “The minikit is REALLY out of reach! Or is it…?”

There will be a small custscene where you see a Stormtrooper take a power cell somewhere. You need to go east platform and then look to your upper left where you’ll see a crane you can shoot down. Shoot it down and it’ll drop giving you access to a zipline you can take. There are two Stormtroopers and an Imperial officer guarding a card on the table. Pick up the card and then open the door by pressing the glowing red switch on the right. This will reveal a room where you can insert the card into a contraption. You will then open up a hidden room revealing two Stormtroopers watching a TV with a power cell attached. Get the power cell and take it back where it originally belonged. This will open up a room with this minikit.

From where you found the last Mouse Droid, you can destroy the stuff against the wall near the entrance to build this minikit on your own.

After getting all Best Leia’d Plans minikits, you’ll get “Imperial TIE Fighter” as a reward.

This Is Some Rescue

Go to the other side of the Docking Bay where you can use use a Force-sensitive character to stack up crates against each other in order to reach the upper ledge. You can cut a whole inside the crate with this minikit inside using a lightsaber.

Rumor: “Use the environment to your advantage when checking the hangar.”

The fifth and final minikit can be found near the end of the level just before you swing across the gap. You’ll have to use a Scavenger to shoot nets in order to reach the upper ledge towards the right where you can find this minikit.

Rumor: “Discover a hidden room by channeling your inner acrobat!”

After you’ve taken your first control of Luke and Leia, the room they’re in has a Villain Terminal that you can use to open a door with this minikit inside.

Rumor: “These trooper disguises can get you into all sorts of places…”

The third minikit requires that you take out three Mouse Droids that are hiding in the level.

Rumor: “Keep an eye out for those mouse droids!”

At the start of the level get the Docking Bay password from the Protocol Terminal nearby. You’ll then have to proceed until you reach the section where you’ll have to fight the Imperial Officer who is holding the keycard. There is a door behind that Imperial Officer that can be opened by a Bounty Hunter character. You can then use the Docking Bay password at the Protocol Terminal on the right to get this minikit.

Rumor: “Enter the code to redeem a fabulous prize! (All transactions are final. No substitutions. Minikit has 0.0001 stud value)”

After getting all This Is Some Recue minikits, you’ll get the “Y-Wing” as a reward.

There is a mini TIE Fighter you can shoot down in the first section of the level which will give you this minikit.

A probe droid will appear in the middle of the first section which you can shoot down for this minikit.

Rumor: “That probe droid has something of ours…”

Just before you reach the open section of the level, another mini TIE Fighter will appear which you can shoot down for another minikit.

Rumor: “This one is even cuter! Now blow it up!”

Not Up to Code minikit

After the cutscene with Darth Vader, take a left turn and shoot at the glowing panels to reveal this minikit.

Rumor: “That panel by the exhaust port looks loose…”

After you’ve reached the large open area where Darth Vader makes an appearance, you have to take out four satellites found on the outer rim to earn the fifth minikit.

Rumor: “Those ghastly satellites just have to go, dahling!”

After getting all Stay On Target minikits, you’ll get “Death Star” as a reward.

That’s every minikit you can find in Episode IV: A New Hope. If this guide really helped you out, we have other LEGO Star Wars guides you might be interested in.

Check out this Youtube video from Gaming With Abyss where its shown where to find all the minikits and accomplish all level challenges in Best Leia’d Plans.