Lunagaron – What We Know So Far | Monster Hunter Rise: Sunbreak

A look into the new monster Lunagaron and some of the details in its teaser video. 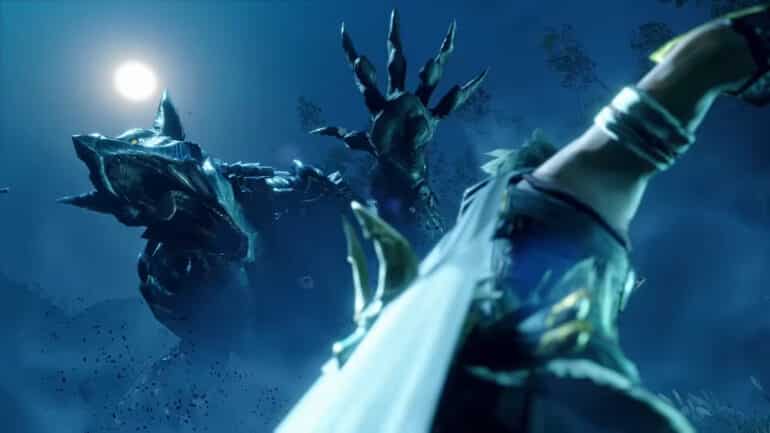 Lunagaron is one of the two confirmed new monsters that will be added in the Monster Hunter Rise: Sunbreak expansion, along with the elder dragon Malzeno. Just as whenever a new monster gets announced, we get excited and try to get as much info as possible to prepare ourselves for the hunt ahead.

There’s only one short teaser showing Lunagaron so far, but we can already make out and speculate some details about some of its traits.

Lunagaron is a fanged wyvern, a classification of monsters that are quadrupedal and have thick and strong tails, similar to the likes of Zinogre and Odogaron, to which it actually shares a part of its name. It also has “luna” as part of its name which refers to the moon, and its English title is “ice wolf wyvern” while its Japanese title directly translates to “ice wolf dragon“.

Its body structure is almost similar to a Tobi-Kadachi, with rows of scutes lining its shoulders and running along its back, similar to a Zinogre. It has a mace-shaped tail that closely resembles a Brachydios tail, but has a more triangular cross-section.

Lunagaron’s head looks like that of a canine with a pointed shout and ears swept backwards. It has yellow eyes that glow dimly in the dark.

It also appears to have an enraged form in which the scutes on its back become more profound and get encased with ice, turning into spikes. Its lower jaw also gains an icy beard during this state, while its chest and underbelly also gain thin icicle spikes looking like frazzled fur.

Lunagaron Speculations: What Could It Be?

Unlike in Malzeno’s teaser video, Lunagaron was only given half of the latter’s screen time, but we got more exposition about it thanks to a new mysterious character.

Well, yes and no. However, all clues that we’ve seen so far tells us that Lunagaron is a monster inspired from the werewolves that we’ve seen in pop culture. There’s the canine physique, the attraction towards a full moon, and the slight transfiguration that it undergoes.

But it’s not legit lycanthropy from what we can tell as Lunagaron does not transform from a human being. It would be quite a drastic turn, at least in this part of the franchise, if it turns out to be a human after all. Then again, there has been some myths that hunters in particular were hybrids of humans and Wyverians, who were believed to be descendants of wyverns.

Also, with Malzeno’s vampire theme, there are also speculations that we’ll see more of the Western-style monsters being adopted into monsters in this world, and that’s something that we’re looking forward to see soon.

Who was the mysterious woman?

In the Lunagaron teaser, there is a woman who suddenly appeared to help the hunter from a Lunagaron ambush. It’s possible that she was also the one who told the tale about the beast in the first part of the teaser. So far, we’ve gotten some hints as to who this mysterious woman is, thanks to this tweet:

As the tweet suggests, she is closely related to someone in Kamura, and that person is Rondine, the Trader. Based from some in-game dialogue, being a trader was just Rondine’s disguise as she was sent to Kamura by order of the king to get the blacksmith. It hasn’t been quite confirmed yet, but it’s also possible that she is Rondine’s sister.

What’s the deal with Elgado?

Within the teaser, we could see that the Lunagaron’s ambush happened in area 1 of the Shrine Ruins map. Also in the teaser, we’re then shown that they had to cross the ocean on a ship to reach Elgado, suggesting that Kamura is on an entirely different island. We can deduce that something awful is happening in Elgado and our mysterious woman has been sent to fetch us to help.

In past Monster Hunter games, and even in the recent Netflix series, it’s usually an elder monster that’s behind all the ruckus. They either drive away the local beasts to other places or infect them with something that turns them into rampaging monsters. It could be Malzeno, but based from experience, it’s more likely another monster higher up the food chain rather than the flagship monster.

Nevertheless, as to how a Lunagaron made it to Kamura, we’re still clueless about it. It may be that Lunagarons are also living in Kamura, or perhaps it can make ice bridges, it swam all the way to Kamura, it took an undersea tunnel system, or it just hitched a ride on top of a Monksnail; it’s still unclear as of this moment.

We’ll surely be keeping an eye out for more details about Lunagaron and the Elgado outpost in the next coming weeks. Until then, check out our other Monster Hunter Rise articles:

Check out this video by gaijin hunter talking more about the mysterious character and the land of Elgado: