Choose a card, but be ready for the outcome. 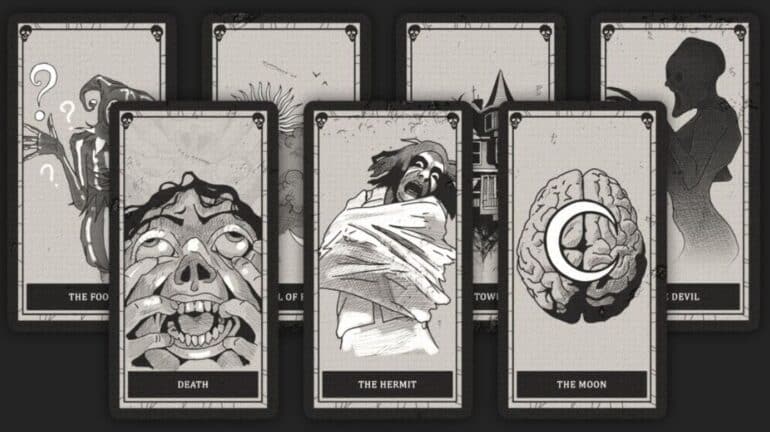 In Phasmophobia, tarot cards and five other cursed items were introduced to aid players in their objectives. Players should be warned of the possibly lethal consequences of using these items, even if they find them alluring. Using Cursed Possessions in Phasmophobia might yield useful information about the supernatural, but it can also be dangerous. A player may want to research the deck before using Tarot cards because the cards that are drawn from it can have a wide range of results.

Despite the fact that the deck contains ten different kinds of cards, the cards players receive are all completely random. A deck of Tarot Cards may not contain all of these cards, so it may take multiple games for players to experience all of the possible outcomes.

Each Tarot card can be interpreted in one of ten different ways:

How to Use Tarot Cards in Phasmophobia

Where to Find Tarot Cards?

Tarot Cards frequently appear on tables or counters in haunted houses in Phasmophobia. Dining room tables, kitchen tables, computer tables, and virtually any other tabletop you can find in your particular location are all good places to look.

There are six cursed items in Phasmophobia that spawn at specified locations on the map. It’s possible that the Tarot Cards will spawn in one of several locations or they may not appear at all if a cursed item spawns instead.

This means that finding cursed items like Tarot Cards in Phasmophobia might be difficult because players don’t know what to look for until they find it. Players looking for the Tarot Cards should look for an object the size of a typical mobile phone with white and black swirls that resemble faces at specified spawn sites.

Players in Phasmophobia will be required to gather clues using ghost hunting equipment like the DOTS Projector or the EMF Reader as they try to find out which ghosts they are dealing with.

After gathering enough evidence, players can determine the ghost’s true nature, at which point the objective will be completed, and they will be rewarded with money and experience. The cursed items can be useful in helping players achieve contracts and other optional objectives that may improve the worth of their reward if they are used correctly.

If you like this guide, check out our other Phasmophobia articles here:

Here’s a complete detailed video by T4t0_ about Tarot Cards in Phasmophobia: