A guide on how to complete the "Release the safety on the cannon's breech" task in Genshin Impact. 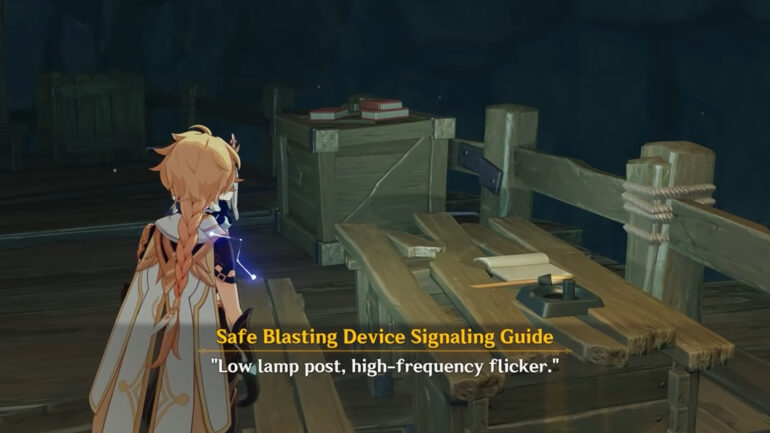 One task which got players confused in Genshin Impact is how to “Release the safety on the cannon’s breech” which is one of the tasks of The Heavenly Stone’s Debris world quest. Fret not, because we got the guide for you.

A whole new region has been added to the game with the Genshin Impact Version 2.6 update. The Chasm is a new location with a massive underground complex of mines from which most of the nation’s ores are extracted. It’s up to us to find out what is going on in these ancient mines, and we have no choice but to do so.

What is Release The Safety on The Cannon’s Breech task?

Release The Safety on The Cannon’s Breech is part of a world questline, The Heavenly Stone’s Debris, in Genshin Impact which Jinwu assigns a number of missions to you and your NPC companions. Clitopho, a former treasure hunter, Zhiqiong, an adventurer, and Paimon are among the companions who will be helping you with this task.

In order to activate the cannon, Jinwu has assigned you the responsibility of releasing the safety mechanism located on the cannon’s breech. As you progress through the tasks, you’ll be required to load the cannonball with your companions. Before you can do it, though, you must first release the safety on the cannon. The Release The Safety on The Cannon’s Breech is a critical stage in the process of firing the cannon and smashing a boulder that is blocking one section of The Chasm.

How to start Release The Safety on The Cannon’s Breech task?

To begin the Release The Safety on The Cannon’s Breech task, read the Safe Blasting Device Signaling Guide. The “Safe Blasting Device Signaling” guide, which may be found nearby, will tell you the frequency at which each lamp will flicker. Each of the three lamp posts has its own frequency of flickering, which should be set according to the instructions in the manual. There are three lamp posts – the high lamp post, the middle lamp post, and the low lamp post – that you can see. According to the instructions, each lamp should be set to either a high-frequency, medium-frequency, or low-frequency setting.

While Paimon couldn’t figure it out, we’ve put together a guide to help you figure out how to release the safety on the cannon’s breech in Genshin Impact.

How to Release the Safety on the Cannon’s Breech?

From the top of the platform in the Chasm (indicated on the map below), there’s a table with the Safe Blasting Device Signaling Guide that you can interact to read. It will say:

Since you will be starting from high up the platform, you will have to switch the high lamp post first. You will also see a viewing spot on the edge of the platform you are on to indicate which lumenlamps should be switched on and where they are in the chasm, and follow the steps below:

Switch the High Lamp Post to a Low-Frequency Flicker

From the top of the viewing platform, simply glide down to first lamp which is to your right. Activating the lamp will set it to flicker on a low frequency (pulses every 2 seconds).

Switch the Middle Lamp Post to a Low-Frequency Flicker

Make your way to the lower platform where the second lamp post is on. Activate it to set it to flicker on a low frequency.

Switch the Low Lamp Post to a High-Frequency Flicker

Lastly, make your way to the ground to reach the last lamp post. Activate it and then change its frequency once to set it at a high-frequency flicker (pulses every second). Be careful as this lamp post is surrounded by sludge and there are enemies that spawn in the area.

After switching the final lamp post on and setting it at the right frequency, the task will be completed and you can proceed to the next task which is to load the cannonball with Zhiqiong.

Check out this video by Gamers Heroes on how to complete the Release the safety on the cannon’s breech task: