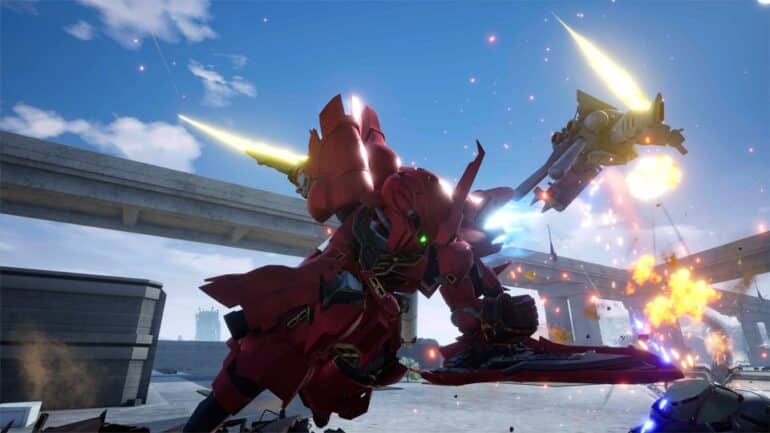 Bandai Namco has recently released new info about SD Gundam Battle Alliance. The info that was released was about the main protagonist, his crew, and the antagonist of the whole game plus a deep summary of the game’s story was also released so fans can expect what will they face during its release.

“The main character (platoon leader) and Warrant Officer Yuno Astarte, who belong to the test unit “Gather Road Corps” whose mission is to “collect gym operation data”, are invited to the world “G: Universe” where many histories gather. It ends up.

There, I met the AI “Sakura Slash” who will be the guide. According to Sakura, in order for the main characters to return to the original world from “G: Universe”, it is necessary to capture the “break mission” distorted by the break phenomenon and register the “true mission” that will be the official history. There is.

The main characters capture the mission to return to the original world. However, in front of them, the mysterious mobile suit “Gundam Latria” and the mysterious person “Hermes Mercury” who drives it stand in the way. What awaits you at the end of false history.”

A programmer with genius programming skills. After graduating from college by skipping grades, she was seconded to a federal technical institution for private recruitment and assigned to the Gather Road Corps for the purpose of collecting and analyzing data on the front lines. She is the childhood friend of the main character and performs operations.

An AI program with a friendly and positive personality that suddenly appeared to guide the protagonists who were drawn into the universe. A navigator who tells the history of various Gundams to Yuno and others. Her exact name is the program code ” SACRA / 1351420 “.

A commercially available pet robot, Yuno’s personal belongings. Since it has been replaced with Yuno’s own “educational computer” kit, he can communicate considerably and is full of emotions. You can also use it like a laptop computer or voice assistant by voice input.

a special service platoon belonging to the Earth Federation Forces “Independent Mixed Mechanization Technology Support Platoon”, commonly known as “Gather Road Corps (GR Corps)”. In addition to the main character who is the platoon leader, the genius programmer “Yuno Astarte” and the test pilots who make up the platoon belong to the GR corps. There is a black-colored gym with the image of “Yatagarasu,” which is the motif of the unit emblem.

A GM unit which its main purpose is to collect battle data and operation data operated by the special platoon “Independent Mixed Mechanization Technology Support Platoon”. According to the unit emblem of the so-called “Gather Road Corps”, the red part of the gym is usually colored “black”, and the “unit emblem decal” is pasted on the left shoulder.

A mysterious mobile suit stands in front of the main characters. In addition to the beam saver and beam bardiche for proximity, it has a wealth of weapons such as the beam rapid gun and quad mega launcher.