A walkthrough for the A Hunter's Cry adventure in Sea of Thieves. 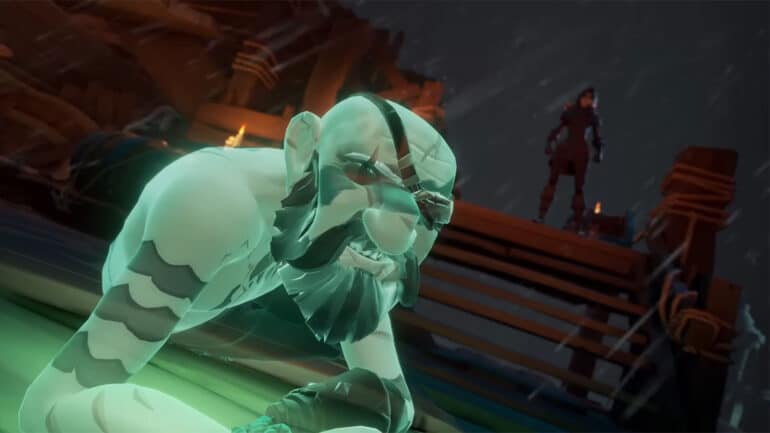 A Hunter’s Cry is the newest adventure in Sea of Thieves where players will have to rescue Merrick after being captured by the Dark Brethren. The adventure requires some cooperation and teamwork with other players in order to navigate through the Damned Sea Dog Tavern properly and reach Merrick in time.

In this guide, we will be talking about the sixth adventure, A Hunter’s Cry, and walk through the steps in order to complete it.

There are six deeds that players can do during the adventure. Completing all of them will unlock the Defender of the Damned memento.

Start the journey by talking to Larinna at the Tavern by choosing the option “I want to help save Merrick!“. You will then receive a note from her telling you to talk to the Pirate Lord at the dock.

Enter the Sea of the Damned

Head to the docks where the Pirate Lord is waiting. Talk to him and go through the dialogue as he opens an archway on the horizon that leads to the Sea of the Damned.

Sail through the archway once you have prepared for the trip and the Pirate Lord will talk to you once more. He will tell that Merrick has been imprisoned in a fortress made in the likeness of the Sea Dog Tavern, and the key to freeing him is by using the lighthouses.

At this point, you’ll continue sailing towards the fortress. Beware of other players as even though this adventure was intended to make players go through it cooperatively, some players may go after you just because they can. It’s best to try and team up with other cooperative players as soon as possible and pray that you get sent to an instance with no griefers.

There will also be Ghost Ships that guard the waters around the lighthouses and fortress. Defeating three of these Ghost Ships will complete one of the deeds in this adventure.

If you decide to go through the fortress while others are taking care of the lighthouses, then make your way through the path that leads upwards to the top of the fortress. You will also have to light up unlit braziers along the way to be able to continue through the paths. The path to the top will also be littered with hunters which can hinder your progress and make the trip dangerous.

Eventually, you will end up at dead ends where you have no way of lighting up the brazier to proceed. At this point, you should call back out to the people manning the lighthouses to move the spotlight and point it towards the brazier that needs to be lit. This will light up the brazier and reveal the hidden path that you need to take. You can switch roles any time as either the one manning a lighthouse or as the one climbing the fortress.

Once at the top, you’ll find a capstan that will lower the final drawbridge that leads to where Merrick is held captive. Turn the capstan to lower the drawbridge and this will complete one of the deeds for this adventure.

Once at the top, talk to Merrick to set him free. The Pirate Lord will also appear and the Dark Brethren will take their retreat at the moment. The Pirate Lord then convinces Merrick to come with him and you’ll be sent back to your ship to sail back home, but not before the Pirate Lord asks you a small favor for him.

Deliver a Letter to Serik

The Pirate Lord will ask you to talk to Larinna once more. She will then ask you to deliver a letter written by Merrick to The North Star Seapost and give it to his wife Serik. After Serik reads the letter, the adventure will then be completed.

Check out this video by XCageGame showing a walkthrough of the A Hunter’s Cry adventure: