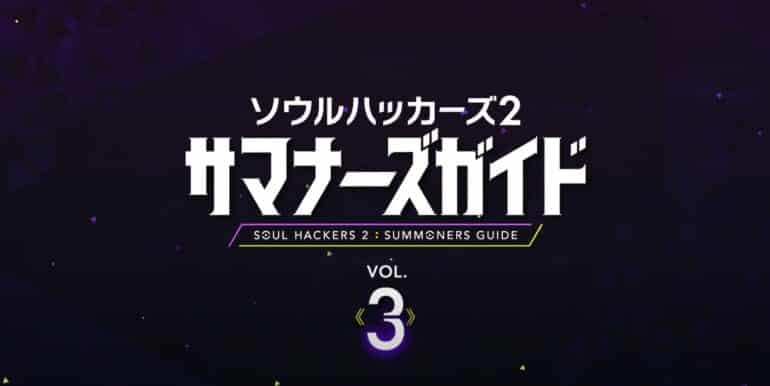 A new Summoner’s Guide trailer was recently uploaded on the Youtube Channel of JP ATLUS. This time the trailer focuses on not only a recap on bio recap of Saizo and Ash but also a full summary of how to fuse Demons and make them stronger.

As we know based on the previous trailer of Atlus, Saizo is a freelancer Devil summoner who specializes in gun skills. He decides to accompany Ringo and her team with a certain objective of his own in mind. A romantic at heart, he plays it cool in his own endearing way. Able to read the room, he often mediates and steps in whenever Arrow and Milady clash with one another. He is romantically involved with another summoner named Ash who accidentally kills him during one of his missions.

In Soul Hackers 2, Demons are one of the most important aspects inside and outside of combat in the game. Players will have a chance to improve their demon’s stats and skills through Demon Fusion. In Cirque de Goumaden, players can fuse demons to create new and powerful demons of their choosing. Not only that, special demons can be made by combining specific demons. Once a new demon is created through fusion, not only do their stats improve but also they will learn new skills as well.

There are many types of gifts that demons give. One of which is known as Mistiques, an item that can be used to improve a party’s COMP abilities for various effects. They can increase the proficiency of affinity attack skills, reduce MP cost, enable a certain usage of skills and provide various effects. These Mystiques are provided by your demons so leveling them up is the best option to receive them.