Tinykin How to Unlock The Friendly Ghost Achievement 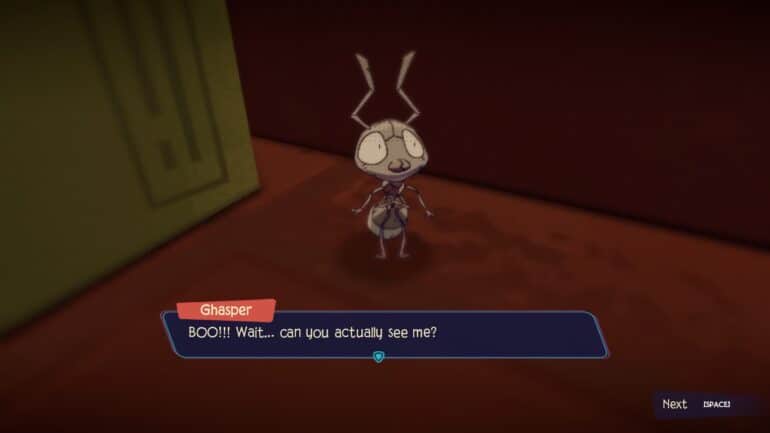 Tinykin is pretty family-friendly by all accounts, maybe with the exception of what went behind the “Milo Show” and the BIG revelation at the very end of the game. But even then, we didn’t give a second thought to ghosts or ghost ants in this case.

Ghasper is a character that appears in random places on each level. This character doesn’t say anything but “Boo!” when you meet them. Only when you find Ghasper in all the rooms do you find out the truth about Ghasper and you’ll also get more than one word out of the very shy bug.

In this guide, we’ll take you where you can find Ghasper in all of the rooms you can travel to in the game. Talking to Ghasper is the only way that it counts toward progression. Simply looking at Ghasper will not count.

(Hey. Just letting everyone know. I actually encounter Ghasper in multiple areas before realizing that there was an achievement tied to it. Oops. Anyway, meeting Ghasper once will make them disappear the moment you leave the room. The more you know, right?)

Ghasper is underneath the red sofa. To talk to the shy bug, you’ll need to enter the sofa from the entrance where the camera is. Go deeper inside until you see pencil bars, that’s where you’ll find Ghasper.

This is probably the first encounter players will have with the bugs. And an encounter like this should immediately draw more attention.

Ghasper can be found shelf where the brown chair is left at the level’s entrance. You can find the shy bug between the two specimen jars. Not exactly hard to find, especially if you’re looking for pollen.

Where is Ghasper in Waters of Balnea?

Ghasper can be found on the upper shelf under the sink on the silver bugs’ side of the level. Look beneath the pipes with the glowing band, if you’re still looking. It’s a little dark and you don’t exactly need to be up there. (There are pieces of pollen on top of the towels.)

Transidor Crossing isn’t a very large level. But even then you can miss this place since there isn’t pollen near that it. Ghasper can be found on the cabinet left of the entrance to Celerion Park. Look behind the toolbox and you should be able to find the shy bug on top of the stack of newspapers.

Where is Ghasper in Lands of Ambrose?

Ghasper can be found under the pantry where you had to get the flour for the cake. This is one of the most accessible places where the shy ghost is in the whole game. (Oddly enough, it was the last place I needed to look to unlock the achievement.)

Where is Ghasper in Celerion Park?

Ghasper is located in the lego labyrinth right of the Casino’s entrance. If you manage to go around the shape corners, you’ll find the shy ghost in this corner.

Where is Ghasper in The Attic?

The Attic is more of an epilogue instead of an actual level. There is no pollen to collect, letters to deliver, or even artifacts to put behind glass. This level does, however, have a makeshift graveyard. It is located behind the house a little to the right side. That’s where you can find Ghasper. If you’ve done it in the right order, Ghasper will talk to you one final time before disappearing like the friendly ghost that Ghasper is.

Check out this video from YouTuber Stantin Gaming in case you’re still having difficulty finding Ghasper.