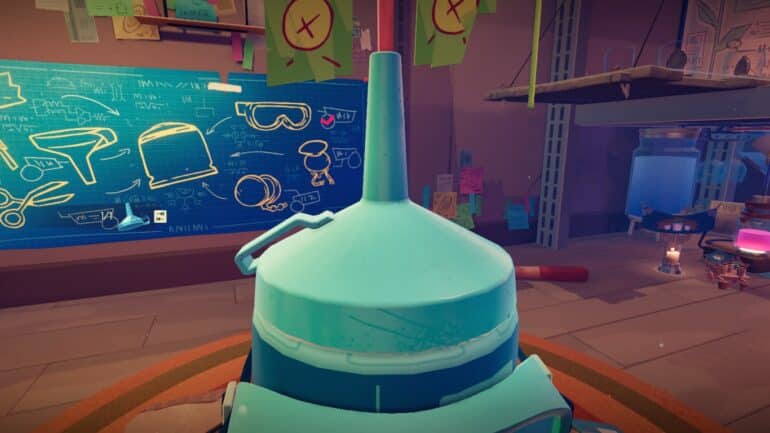 Foliana Heights, a luxurious and wild jungle, is the domain of a proud tribe of mantis. Usually hostile to new arrivals, they are preoccupied with the sudden appearance of a relic they believe to have dark origins.

The mantis believers have restrained an object they believe to be one of the shadow creatures’ tools. Unfortunately for us, their paranoia has gotten the better of them and unless we find the key that opens the lock, these mantes will not allow us to go near the relic.

This has got to be one of the quickest levels in the game if your objective is to just move the story forward. All you need to do is to find the key that fits into the lock. Once you’ve opened the lock, the group of mantis “guarding” the relic will run away in fear, allowing to walk away to continue building the machine.

At the center of the map, you’ll find a giant sunflower. Basically a hub for all your silk travels, it also has a hidden pollen cluster on it.

By opening up all flowers around the big plant, a pollen cluster will appear at the center of the sunflower.

The platforms around the big flower also have some pollen.

Along the rafters near the ceiling, there is a gap that can only be traversed if you jump onto the mouths of an entire row of carnivorous plants. (It doesn’t take much effort to cross, I just find it humourous.)

At the other side, you’ll find what looks like a shrine dedicated to a pollen cluster. We don’t know how else to describe it.

Booping the nose of the statue

In one of the vivarium, you’ll notice a statue with a very prominent nose. Well, it happens to be hiding a secret too. Climb up the leaves where you can get an angle on its nose. Then you’ll want to toss 8 pink tinykin at the nose to lower it. Doing so will reveal a pollen cluster.

After you’ve delivered all the letters to the mailbox, a pollen cluster will appear. Keep reading to find out the locations of the letters below.

Hidden Pollen around the computer chair

To get this pollen, go around the books and the pollen should be on the edge of the chair. The brown chair can be found in the same place you found the first letter. If you’re feeling fancy, you can always climb up with the help of green tinykin.

Hidden Pollen on top of the specimen jar

On the shelf on top of the science table, there are specimen jars that can potentially have pollen sitting on them.

Hidden Pollen under the village’s arches. You can easily get to them with enough green tinykin.

You can find Marsh and Cope on top of the small vivarium, and they will ask you to find the missing pieces of the display skeleton. You need to find the front legs, hind leg, and skull.

Once you have all the pieces, go back to Marsh and Cope, assemble the skeleton, and finally receive the “Sculpted Knowledge” artifact.

This is yet another quest that involves finding a gem for another not-so-shady accomplice. For this one, you’ll need to find Robine, the mantis can be found along the ceiling where the purple vines are most prominent. Robine will ask you to find a ring that’s on another platform a distance away, covered by purple vines.

To get where the ring is, you’ll need to glide to the opposite beam which requires at least 3 full bubble energy. Once you have the ring, destroy the wooden block to get back to Robine. (There should be some red tinykin close by.)

Over the book arch

At the start of the level, immediately head left, and you should see this setup as pictured above under the table. Pass through it to find an early-level letter.

Close to the location of the last letter, you should see a water puddle that covers an area of the floor. Move forward a bit past the display and you should see the a lilypad in the corner.

You’ll need the help of green tinykin to hop across the water.

To find this letter, you’ll need to reach the ceiling by climbing up the rope at the center of the room with the large sunflower. Follow the path until you find a corner that’s filled with purple vines.

In that area, you’ll find a wooden barricade. Destroy it with the help of red tinykin and should see a leaf with a letter on top of it. Have one of your pink tinykin pick it up before delivering the letter to the mailbox.

At one of the top shelves that can only be accessed through the path in the middle of the map, you’ll a bunch of books that’s forming a sort of cover. Turns out, in the back, there’s a letter for you to pick up.

900 pieces of pollen are needed to unlock the bubble upgrade. More pollen can be found along the glass ceiling.

1100 pieces of pollen for level completion. Collecting all the pollen unlocks the Wild Forager achievement.

Check out this video from youtube Stantin Gaming where he goes on a 100% completion run of Foliana Heights.