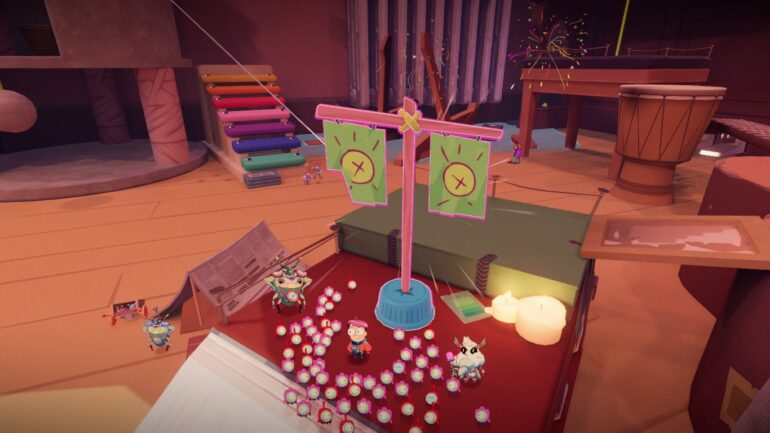 The city of Sanctar is the religious heart of the bugs. Adepts and pilgrims assemble in the cathedral to honor Ardwin, the creator, and sing his sacred canticle.

Solaria, fresh from his army’s conquest, has brought back with him a strange relic of unknown origins. Unfortunately for us, we need that relic. So, we need to bargain its release in some way, somehow.

The objective for this level is to repair the CD player so all can hear Ardwin’s Canticle. To achieve this, you’ll need to retrieve and set the following items to their spots: the CD that contains the song, a tuning fork to complete the circuit, and a play button.

Once you’ve assembled all the pieces. All you need to do is to activate the machine and Ardwin’s Canticle can be heard all around the room. In their gratitude, the bugs will reward you with the relic, the first piece needed to complete the mysterious machine.

Tinykin All City of Sanctar Collectibles

Pollen cluster within the cathedral

This pollen cluster appears after uncovering all the candles within the church. This requires the help of half of a dozen red tinykin… approximately. The candles themselves aren’t remotely hidden.

When all are found, the cluster will appear on top of the exit on the second floor.

Using 6 pink tinykin, pick up the cylinder located on the second floor of the church and then take it to the bottom where the little guys will take it to the frog statue. This will cause the pollen cluster to appear.

Under the red sofa

This pollen cluster can be found under the big red sofa.There are a few entrances around where you can enter underneath.

You will find a wooden block that you have to explode and behind it you will find a bunch of pollen. There is also one small entrance at the back side of the sofa where the picture frame is.

The Sphynx and its red nose

The Sphynx is missing its nose. It’s a good thing then that it is not too far away. Climb up a little more and you should be able to see it at the far end of the platform. Have a pink tinykin carry it until you’re back at the Sphynx. Returning it will make a pollen cluster appear.

To get this pollen cluster, you have to deliver all four letters to the mailbox and you will be rewarded with additional pollen. Keep reading to find out the locations of the letters.

There are literally dozens of pollen locations at any given level. These locations are noticeable for the sole fact that they can be easily missed.

Pollen hidden in nooks and crannies

Pollen can be found in all sorts of places. The along the tops of books on the bookshelf. Some are even hidden under books. While others need to be freed – like that drawer full of pollen that can only be uncovered if you push open a drawer by throwing pink tinykin at a book that’s sticking out.

There is a bunch of pollen between the fins of what seems like a radiator. They can be missed if you’re not actively looking in that direction.

For the first artifact, need to find Dulcimera’s Daughter, Melody. She is currently trapped inside the piano after trying to get an artifact out.

To get inside the piano, you’ll first have to press the pedals below before making your way to the restaurant where the ants have mistakenly used one of the keys as a table. With the help of pink tinykin, bring it back to where it belongs. Once the key has been set, you should have access to the piano.

Melody should be at the back behind a wooden block that needs to be destroyed. Once you safe her, she will give you the gold coin, the Artifact.

(Don’t forget all the pollen inside the piano.)

In order to find this artifact, you need to present evidence of the monster that Dovycan saw inside the table. To get inside, you’ll need to destroy the block that’s keeping it closed. Once open, destroy all obstacles between the entrance and the monster.

You’ll then want to get the help of pink tinykin to carry the camera to where the monster is. Snap a photo, grab it, and set it on the frame to complete the side mission.

This artifact is acquired after helping Arsene retrieve a precious gem that’s stuck in the TV. To open the side panel, you’ll need a screwdriver. The tool is hanging near the side of the wall. You’ll need two bubbles of flight to reach it. The upgrade is unlocked after collecting 1000 pollen and then talking to Sikaru, the brewmaster.

After you’ve entered the TV, you must go around, collect pollen, and push transistors into place with the help of pink tinykin. Once everything is in place, the TV should light up and a cassette pops out of the cassette deck. Get a pink tinykin to pick it up and then toss the gem into the ring case to fulfill your end of the bargain.

The first letter is cannot be missed. It is directly in front of the entrance where the mailbox is. Toss a pink tinykin to grab it and then toss them both into the mailbox to start collecting.

This letter has some elevation to it. To reach it, you’ll need to climb from the piano area and make your way to the edge of the shelf. the letter can be found in the void left behind by the partially opened book.

This letter can be found at the end of the climb starting from the red sofa. The letter is neatly placed as if displayed between two sets of candles.

Near the glowing bottle

The last letter is hidden a bunch of junk near the vicinity of the TV. If and when you see a green glowing bottle then you know you’re close to it.

1000 pieces of pollen are needed to unlock the bubble upgrade. Best to mark locations down by noting large pieces of furniture.

1600 pieces of pollen for level completion. Collecting all the pollen unlocks the Melodic Forager achievement.

Check out this video from youtube Stantin Gaming where he goes on a 100% completion run of the City of Sanctar.