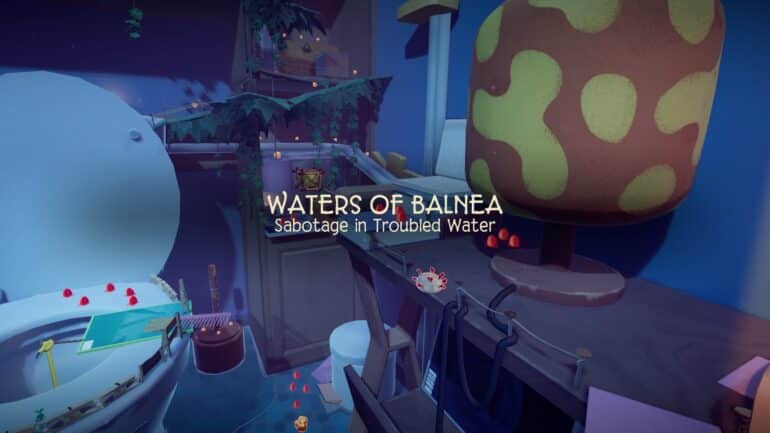 Waters of Balnea, a far more flattering than it actually is, is the domain of water and night. Home to outcasts of opposite characters, they have a hard time coexisting with one another. The aquatic festivities draw partygoers from the whole house but the extended festivities was the straw that broke the camel’s back for the passive residents of Balnea.

There’s trouble in paradise. The partying silver bugs are getting a little too out of control. As a result of their non-stop partying, the dung beetles are starting to lose sleep. In a misguided bid to settle things down, the dung beetles’ mayor took up the scissors of the city and started to cut power cables. This infuriated the silver bug’s leader and is now threatening to cast the scissors to the bottom of the tub if the party doesn’t restart… and soon.

To ease tensions on both sides, we’ll need to get the party going again. It’s going to require 5 things: a toy boat, an active hand blower, a jukebox blasting loud music, a laser pointer, and a bottle of bubbly soap.

When all these things are brought to the bathtub, all is forgiven and we can get the scissors before things get too unruly.

Tinykin All Waters of Balnea Collectibles

The first Pollen Cluster is located on top of the lamp. To uncover it, you’ll need to run electricity through the socket with the help of 3 blue tinykin. This will cause the lamp to turn on and make the cluster appear. You’ll also need around 19 green tinykin to reach the top via the book on the side.

Lighting up the TP fortress

The second pollen cluster is uncovered after blowing up the covers of about 8-9 stubby candles. They are located all around the toilet paper settlement. Once you’ve uncovered them all, the cluster will appear in the center at the top of a stack of toilet paper.

A pollen cluster too far

The third pollen cluster is located along a pipe seen from the side of the dung beetle’s side of the bathroom. To reach it you’ll need to climb the ceiling starting from the clothes presser and then destroying a wooden barricade with the help of 6 red tinykin. The Cluster will be on the other side.

After you’ve delivered all the letters to the mailbox, a pollen cluster will appear. Keep reading to find out the locations of the letters below.

Hidden Pollen inside the trash bin

Will need the help of a single pink tinykin to open the lid and several green ones to help you reach and exit the trash bin.

Hidden Pollen inside the cupcake

Will need x amount of red tinykin to “liberate” the pollen from the cupcake.

Hidden Pollen on top of some toilet rolls

There are several pieces of pollen on top of a stack of toilet rolls. It can be accessed by going up one level and going across the bridge from the lamp.

Hidden Pollen in the clothes presser

There are a number of pollen in the clothes presser, to get to them you’ll need form a ladder with green tinykin, and while facing the initial pit, jump past the exhaust blades to get into the hidden chamber.

Hidden Pollen in the Cabinet

In the cabinet where you needed to open with the help of the pink tinykin, there are pollen wedged on top of the towels where you found the fourth letter.

This letter can be found inside the sink across from the toilet. You’ll need to climb down a rope to access the area.

On top of the hand blower

The second letter can be found on top of the hand blower across the vent you initially entered the area from.

The third letter is located under the table next to the tub, on top of a suspended roll of toilet paper. You’ll need to go up the suspended items to reach it.

Open the clothes presser machine with the help of blue tinykin and traverse its guts to claim the diamond on the other side. Give it to the suspiciously looking bug with the ring case to claim your artifact.

Earned after helping Rose and Jack, two lost souls, defy their families and live as one. This involves taking tokens of their love for each other. Requires unlocking the door between the realms. (Be mindful that if you decide to take Rose’s token early, your tinykin will be stuck holding it until you open the door from the other side.

Earned after helping Romain get his Teddy friend clean by taking it to the washing machine. Needs 15 pink tinykin to carry. And you’ll need to electrify the machine with the help of blue tinykin.

900 pieces of pollen are needed to unlock next the bubble upgrade. The cabinet that has Romain’s teddy friend is probably the only place that has pollen that’s not easily found.

1200 pieces of pollen for level completion. Collecting all the pollen unlocks the Party Forager achievement.

Check out this video from youtube Stantin Gaming where he goes on a 100% completion run of Waters of Balnea.