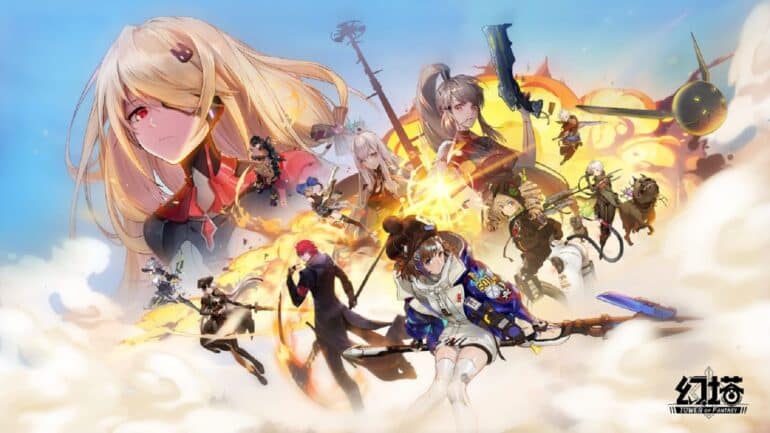 Tower of Fantasy characters, also known as simulacra in-game, are the finest warriors you can get as you explore this new anime-inspired fantasy world. Each character features a one-of-a-kind design, an engaging backstory, and lethal weaponry.

It may seem confusing at first, but in Tower of Fantasy, characters, weapons, and Simulacra are all essentially the same thing. Unlike in Genshin Impact, where you have to draw for both the character and their weapon, in Tower of Fantasy, you only have to get one of them in order to unlock the other.

Unlocking characters is mostly done by participating in the game’s many advancement systems, events, and the ‘special order’ banners, all of which are familiar from other open-world games. As such, here’s a rundown on all the playable Tower of Fantasy Characters so far.

These characters are extremely rare and can only be obtained through ‘special order’ banners and top-tier event awards. When you reach the third level of the Simulacrum, you’ll gain access to a new skin for every character in SSR.

The Tower of Fantasy has very few healers, and Cocoritter is one of them. Her healing field of effect is proportional to her maximum attack, making her special ability quite comparable to Pepper’s. Cocoritter’s field-of-effect, however, scales far better and follows your character wherever he or she goes.

Crow’s special ability and discharge ability are both rather simple: the former causes six returning blades to be fired around his position, and the latter causes three blades to be spawned, all of which will continue to orbit the character. As an added bonus, the latter sends Crow rushing toward the intended destination, where he can pounce on any unsuspecting enemies present.

Huma has the ability to quickly swap between her shield and axe. Therefore, her standard attack combos will vary based on the method you utilize. The shield is better for defense, but the axe is more effective in combat.

All of King’s abilities, from his special skill to his discharge ability, are just extremely far-reaching scythe swings filled with flame. You can forego using his special skills, as his regular aerial assaults are devastating on their own. If the King destroys a shield, his first passive upgrade will cause burn damage over time.

Meryl incorporates defensive passives throughout her abilities. Great ground-slamming normal attacks, a lengthy slashing combo as her special skill, and a powerful AOE ground slam as her discharge ability are just some of her many strengths.

Nemesis is a useful support since she can slow down enemies, summon an electrode that automatically targets enemies, fire guided missiles, and heal you. To rephrase, she is an excellent hybrid support/sub DPS.

Samir’s Dual EM Stars weapon is a fantastic DPS option. In combination with Volt, Samir’s charged attacks will immobilize and electrify their enemy, causing additional damage. Her regular attacks include her jumping up and spraying lightning bullets, while her special talent creates an electric field loaded with lightning bolts that may deal significant damage.

Shiro has a particular ability that allows her to generate a Chakram area-of-effect that slows down and attacks her foes with Chakram blades. Her ability to discharge has a wide-ranging impact and can temporarily stun its targets. Once Shiro has reached Level 3, he can clear his cooldowns by shattering an enemy’s shield.

Tsubasa is a sub DPS with ranged attacks, capable of either single-target shooting or casting arrow rains. Tsubasa’s unique ability not only deals damage, but can also stun foes if they collide with an obstruction. The cooldown on this ability is only twelve seconds. Tsubasa’s discharge ability also grants her a cold front, which she can employ to increase her damage and acceleration.

Zero’s defensive toolset is quite flexible, as his special skill grants a shield that takes no damage from attacks and lasts for 10 seconds. Enemies will take damage and be launched into the air by this ability. In addition, Zero possesses a discharge ability that causes a shockwave to be emitted. Unfortunately, Zero’s healing ability is trapped behind Level 1 and Level 3 advancements.

Claudia is the kind of woman you wouldn’t want to offend. She is hailed as the leader of heroes and strikes dread into the hearts of her foes before cutting them in half with her mighty one-handed sword. But she has a hard time making up her mind and secretly adores felines.

Since no other SR in Tower of Fantasy possesses the Grievous (physical) element, Bai Ling is a valuable comrade when facing foes who are vulnerable in this way. If you don’t have possession to a Shiro or Tsubasa, her ranged DPS can help you out. Bai Ling’s special ability executes a piercing shot, and her discharge attack causes an explosion.

Echo is the most effective shield-breaker of all the released Tower of Fantasy SR fighters. Since most of the more powerful foes will be armed with a shield, her weapon will get a lot of use. Her lightning-fast spear strikes can stun and even electrocute targets.

Ene wields a massive maul, which becomes significantly more effective if she employs her unique ability. Short-term, this will make things windier and do more damage. Ene incurs no cost to dodge while standing with the wind at her back.

Hilda’s regular attacks consist mainly of shooting at your opponent; there are no special sequences to speak of. Her ability is more unique in that it can deploy a turret with significant blasting capability. You should know that you’ll have to keep an eye on this turret by yourself. The target takes significant damage from the discharge ability, and their resistance to Ice is diminished.

Pepper, like many SRs, can be valuable early on because of her high healing capacity. Her weapon  shouldn’t be your main DPS, but her healing field-of-effect special skill can come in handy when times go tough.

Other Tower of Fantasy Characters

Frigg isn’t included in one of the obtainable Simulacra for now, but she will be in future updates. She is a terrifying presence in the Tower of Fantasy. In fact, she is a significant antagonist. Frigg is Sage’s deputy and is in charge of the Heirs of Ada.

In case you didn’t know, Mia is our in-game chef and best friend. Throughout the game, you’ll collect various items that you can use. The ingredients will be given to her, and she will prepare meals with them. These foods are necessary to your survival and will provide you with various perks as you play.

Shirli is the ideal companion for every person. When you arrive at the shelter looking like you can’t get up on your own, she helps. Because of this, players tend to develop a close connection with her, and we can’t say we blame them. She is incredibly endearing and delightful. Shirli wants to be a strong, analytical thinker and help people like her big brother Zeke does.

Zeke is a pivotal character in the plot. He is Shirli’s older brother and Astra Shelter leader.  He shoulders the weight of ensuring the wellbeing of everyone in his immediate surroundings, which is a tremendous responsibility. Although he gives off the impression of being unconcerned and distant, he actually has deep feelings for each and every person he meets.

Also check out this video by GuitarRock First explaining which SSR Characters you should pick in Tower of Fantasy: