Here's everything we know so far about Darktide's crafting system 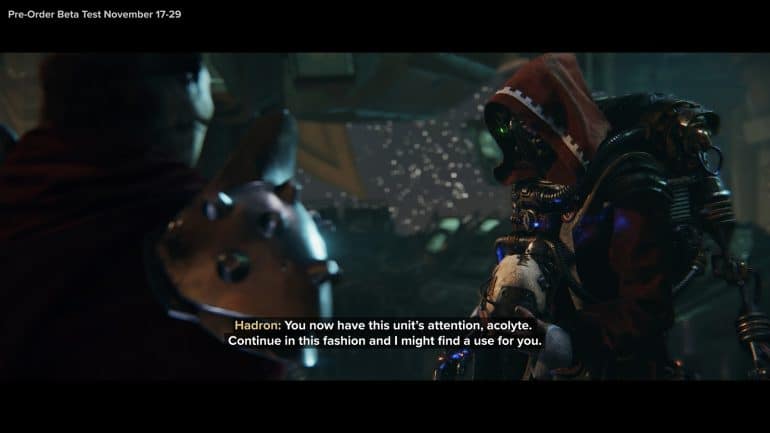 The Shrine of the Omnissiah is a vendor that can be found on the central hub of Operations. It is located in front of the Psykhanium. Currently, the Shrine’s only purpose is to Consecrate weapons and relics into more powerful versions. Developer Fatshark plans on releasing more features at the vendor at a later date.

Shrine of the Omnissiah Required Materials

There are two kinds of materials that are used to alter weapons: Plasteel and Diamantine. These are usually given at the end of a mission as a supplemental reward. They can also be found in chests or on any surface.

Usually, it is the Diamantine that’ll complicate things for you. You will always be short of the stuff and it’ll take you at least 2-3 missions to get enough to upgrade from Blue to Purple. Plasteel, on the other hand, is plentiful. Don’t be fooled by how much Hadron is charging you, you’ll get it back very quickly.

It is worth noting that if you were part of the pre-order beta, these resources weren’t introduced until midway through the second week. So, there’s a chance that some players might have missed them altogether.

From what we can tell, the additional materials you find on a mission are also rewarded to your teammates. We can’t confirm this right now with the chaos of random lobbies and general mayhem that happens. We will update this if necessary.

This section here is what the following features will be like when fully implemented, according to developer Fatshark. The highlighted sections are the descriptions based on what the Darktide developers what us to know about the upcoming features.

Consecrating a weapon or curio increases its sanctity in the eyes of the Emperor, improving its effectiveness, and adding a random Perk or Blessing, depending on the item and its new sanctity level.

The only functioning feature of the crafting system, Consecration is pretty much the same as it is in Vermintide 2 but without the need to sacrifice dozens of weapons to the RNG gods.

The only thing you need to know about it is that when upgrading a weapon, the newly consecrated weapon will fall between two different upper levels. If you’re really unlucky, your weapon might fall in the lower half of possible rolls.

Now, let’s talk about the upcoming stuff. Again, we don’t when these Darktide features are going to be implemented but hopefully sooner rather than much later.

You may also choose to surrender a weapon to Hadron in exchange for a Votive Offering dedicated to now of the weapon’s Blessings. This allows you to extract Blessings you are interested in from weapons you no longer want, and collect them for use with the Combine or Re-Bless actions.

This one is pretty straightforward. You choose one of your weapon’s Blessing, extract it from the weapon, and you can store them to add to another weapon of your choice. The weapon will be destroyed in the process.

You will want to use this feature to preserve your favorite Rank 4 Blessing and store them for future use.

By Re-Blessing a weapon in the Shrine, you can replace a weapon’s existing Blessing by expending a Votive Offering from your collection, further tailoring the weapon to your liking. The weapon gains the Blessing associated with the chosen Votive Offering. The original Blessing is lost in the process.

This is where you put your stored Blessings to use. You can use this feature to replace an existing Blessing with another one of your choice. As stated above, the old Blessing will be lost.

This feature is what you’re looking for in case you want to modify a weapon’s playstyle to fit into a certain build.

To refine your weapon and curios, Hadron takes your item and attempts to scour away the corrosion and damage of its long use, uncovering its true nature and altering its strengths. In game, these strengths take the form of the item’s Perks. Accordingly, each time you Refine an item, one Perk is discarded in favor of another random Perk uncovered by Hadron’s repairs. Multiple refinements on the same item attract increasing costs – the deeper a weapon’s true character lies, the harder it is to reach it.

One of the more interesting and deeper features of Darktide, you can use the Refine Item feature to further change an item through cleansing. This process will replace the Perk of the item with another random one. Do keep in mind that repeated refinements will cost more than the last time.

Nothing much else to say except good luck, and hopefully, you’ll get perks that make sense for the weapon, and sooner.

And that’s it for our thoughts on the crafting system and its upcoming features. So, until these features are implemented, you might want to think twice before discarding that trash weapon with the Rank IV Blessing.

Check out this video from YouTuber Tyicus Gaming where he goes over some general tips with the Warhammer 40K Darktide crafting system.