Weird West – How to Play as a Pigman

Learn how to play as a Pigman, all Pigman abilities, and Pigman lore in Weird West. 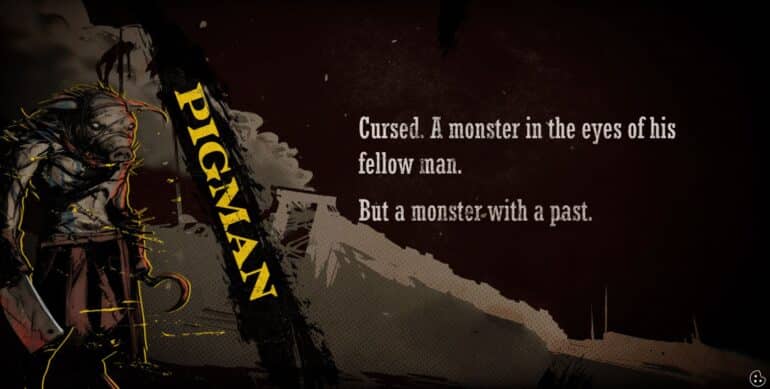 Being a Pigman can be an oddity in Weird West and you can play as one. Everyone is afraid of you for good reasons. Folk doesn’t want to come near you and will mock your ugly appearance. Life ain’t easy on the poor Pigmen of Weird West.

What are Pigmen in Weird West?

Pigmen are terrifying creatures known for slaughtering and kidnapping folk. It is considered to be a greater mercy to die by their hand than to be taken alive. Those who are unfortunate to be captured are turned into monstrous hybrids between a pig and a human.

They are known to ambush travelers from all across the Weird West. Though their main abode is in the northeast of the map apt called “Pigeater Bog.” Pigmen thrive in the swamp where the disgusting habitat reflects their mental state.

Pigmen are naturally immune to poison. Their bodies are a harbor for poisonous substances which they can use against their enemies. This might explain why the majority of Pigmen in Weird West prefers to fight in close quarters.

Depending on what you choose as Cl’erns Qui’g, the fate of the Pigmen will forever be changed in the Weird West and how people see them.

When Can You Start Playing As A Pigman?

You have to complete the main Bounty Hunter journey before you can play as a Pigman. After you’ve completed Jane Bell’s search for her abducted husband, the game transfers control from her to Cl’erns Qui’g, who is a Pigman.

As soon as you take control of Cl’erns Qui’g you’re given a Cleaver and Stubbs Double-Barrel as your starter weapon. At the start of your Pigman Journey, you’ll have to stick to close-ranged combat until you can find better weapons.

Cl’erns Qui’g is a wretch with no memory of his past life living in a mutilated body. This Pigman journeys through the unforgiving Weird West in search of answers.

Despite the terrifying reputation of the Pigmen, people will still willingly trade goods with you. Though the occasional passerby will usually give you the snide remark of how you don’t belong in their human settlements. It’s probably the perk of being the first ever talking Pigman they’ve ever met.

Best Way to Play as a Pigman in Weird West

Being a Pigman is much different than being a Bounty Hunter. As a Pigman, Cl’erns has natural immunity to poison. This means that you can take advantage of poison barrels more frequently without having to worry about taking passive damage from the affliction. You are also built better for close encounters as the unique abilities of the Pigman often involve getting up close and personal.

Focus on amplifying your ability to fight close quarters. Shotguns and melee weapons are best suited for you and compliment the abilities you have. Invest in abilities that get you in up close and personal using Nimp Relics.

Here are all the unique abilities only available to the Pigman:

As a Pigman, you can also eat corpses which restore your health. This act of cannibalism is only available for Pigman and Werewolf characters. Eating corpses doesn’t give any negative reaction from NPCs or members of your posse.