A complete guide in completing The Abducted Blacksmith in Weird West. 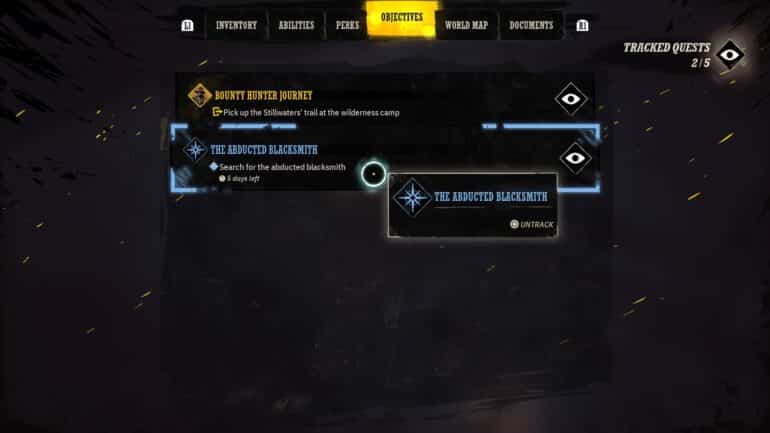 The Abducted Blacksmith is a side-quest in Weird West where you’ll have to find Nancy Bennett’s husband who has been kidnapped by the Stillwater Rangers for nefarious reasons.

At the beginning of Weird West shortly after you arrive in the town of Grackle you’ll be greeted with streets of dead bodies and mourning townsfolk. Some of the people are missing. One of these people just happens to be the town blacksmith whose wife pleaded with you to find her husband in exchange for her pistol.

This guide will teach you everything you need to know about completing The Abducted Blacksmith quest in Weird West.

How to Start The Abducted Blacksmith Quest in Weird West

You can start The Abducted Blacksmith quest shortly after arriving in Grackle by talking to Nancy, the woman at the edge of the town gates. You can find her a little bit further from the Sheriff’s office.

Here is what you need to know about The Abducted Blacksmith quest in Weird West:

The first thing you have to do to find the abducted blacksmith is by going to Stillwater Camp. The journey will take you 11 hours provided you didn’t make any stops heading there. This is essentially the game’s tutorial area where you learn the basics of combat.

Note: There is a missable Nimp Relic in this location.

The Stillwater Rangers are the enemies you’ll encounter in this location. They’re nothing noteworthy. Take them out, loot them, and proceed. At the end, you’ll be asked to look at some tracks on the ground and then head to another location.

Once you’ve arrived at the tracking site, you’ll meet up with a mysterious girl who’ll lead you to some more tracks on the ground you have to interact with.

Greenwood Run is surrounded by plenty of enemies. There are multiple ways you can approach this: you can go in guns blazing or you can take the stealth approach. If you opt to do things quietly, there is an opening on the left side of the gate you can slip through.

The blacksmith is in the middle of the camp, locked inside iron bars. Be careful when shooting as he is near an oil lamp. If it blows up, he dies and you’ve failed the mission. Take care of the Stillwater Rangers guarding the camp first before attempting to free him.

After you’ve cleared Greenwood Run, go to the small house just across the barn. Next to the bed, you’ll find the keys needed to unlock the blacksmith’s cage. Go and free him and he’ll converse with you a bit before leaving the area.

Now that the blacksmith has been rescued, you no longer need to operate under the 4-day time limit to rescue Nancy’s husband.

Talk to Nancy Bennett at the Blacksmith’s shop. She’ll tell you how grateful she is and give you her prized revolver, The Copper Quill & Medley Spiritstouch, which has a fast attack rate and large magazine for a sidearm. She will also tell you that her husband will upgrade your weapons for you as long as you bring him the ore.

What Happens If You Don’t Rescue The Abducted Blacksmith in Weird West?

You’ll get locked out of Grackle’s Forge and unable to receive Nancy’s special pistol. Since The Abducted Blacksmith is an optional side-quest it is entirely missable. Nancy is unable to do her husband’s job for her since she isn’t a blacksmith herself.