A Plague Tale Requiem Walkthrough Chapter 1: Under A New Sun 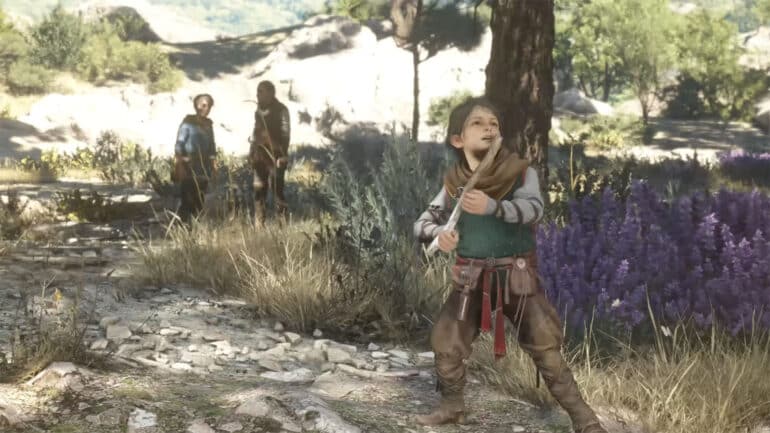 A Plague Tale Requiem is the sequel to A Plague Tale: Innocence, following the story of Hugo and Amicia after the events of the first game. As the siblings, together with their mother, Beatrice, and their friend, Lucas, try to find a peaceful life in a new place while trying to find the cure to Hugo’s Macula, they once again find themselves in trouble after being falsely accused as thieves.

In this guide, we will go through the walkthrough of chapter 1: Under A New Sun, of A Plague Tale Requiem, showing some tips, tricks, or solutions on how to complete the chapter.

A Plague Tale Requiem: Under A New Sun starts off with a quick recap of the events from the previous game. The scene then changes to the siblings running away from something. The entire first chapter serves as a tutorial for the controls of the game.

The first part shows Hugo and Amicia running away from something, which turns out to be just Lucas, their friend and is not their mother’s apprentice. The three spend their time role-playing out in the fields.

Hide from Lucas the Perfidious

The three then decide to play hide and seek, with Lucas playing as the seeker. They will have to sneak away and avoid getting caught by Lucas by going around the ruin walls.

The siblings will then decide to hunt Lucas instead, so they will need to then sneak up on him. They can hide behind a window ledge so that when Lucas passes by, they can jump over the ledge and sneak up behind his back.

After the game, Lucas decides to head back to help Beatrice while the siblings venture off some more. They will arrive at the river where Hugo wants to play a naval siege attack.

Another game will start where you play as Captain Amicia, shooting down pinecone “ships” with your sling to prevent them from arriving at the kingdom. As they play, another boy named Tonin will arrive and play along as the game continues. As Tonin lands the coup de grace, he then hurries home while the sibling continues playing.

Continue following the river until you find a huge castle wall.

As the siblings approach the castle wall, they’ll find out that it’s locked, but there is a door to the side where they can enter. As they explore the place, the floor underneath them collapses.

Find a way out of the castle

The siblings then decide to get out of the place instead, but they stumble upon a beekeeper who thinks that they were a part of the thieves who ran the place down. You’ll then have to guide the siblings to sneak around the beekeepers by hiding through bushes and causing distractions to avoid getting detected.

Pick up the pots along the way to serve as ammo to distract any beekeepers that are patrolling the path. You will then eventually arrive at a locked door where you have to let Hugo go through a hole and unlock it from the other side.

The siblings are about to get away, but then they will see Tonin being assaulted by the beekeepers. Hugo tries to interfere and Amicia tries to fight back with QTE prompts, but she gets overpowered. Hugo’s Macula then acts up, causing rats to attack the assaulters, but then he passes out.

Hugo wakes up in an island again, with a firebird nearby coaxing him to follow it. Simply follow the bird all the way to the end where Hugo arrives at a pond. The water in the pond helps him restrain his Macula back, and then he wakes up. As it turns out, he was dreaming after passing out and is now in the company of his mother, sister, and Lucas on a cart.

As the group makes their way to the city, they get stopped by some men looking for the siblings. They almost get away with it until the other man decides to remove the tarp that hides Hugo. A scuffle ensues, which makes Amicia fall off from the cart.

You then get control of Amicia once more as she tries to escape the other men. Sneak away by crouching through the tall grass. Once she goes downt he first ledge, she’ll get spotted and one man will throw his torch at her, causing the whole field to go up in flames.

Head through the abandoned house where Amicia will get ambushed, but luckily the ambush ends as soon as it starts. Head back outside and she almost gets hit by a spear. She then retrieves her sling back while the spearman charges at her, wherein you’ll learn how to counter.

You then have to make your way through the path forward where you can either choose to eliminate the other men with the sling head on, or try to be stealthy and avoid confrontation.

As Amicia goes through the flaming landscape, she hears her mother’s cries for help. She then gets held hostage, but you can stop it by quickly doing a headshot to her assailant to set her free.

The chapter ends as the four of them reunite and get out of the fire safely.

Here are the trophies that can be obtained in Chapter 1:

Check out this video by Hollow showing gameplay of Chapter 1: