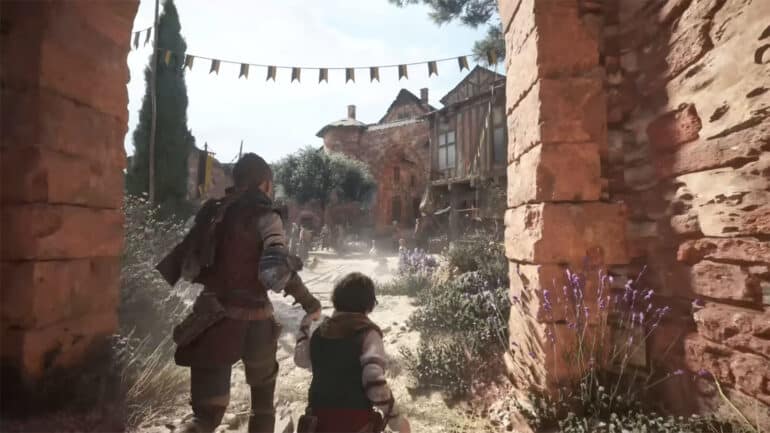 Newcomers is the second chapter in A Plague Tale: Requiem which follows the sibling’s narrow escape from being falsely accused and hunted down by angry farmers. After finding refuge in the new town, the siblings were able to enjoy the market, however, it did not last long as Hugo’s Macula was acting up again and it’s up to Amicia and Lucas to fetch the Magister Vaudin.

In this guide, we will go through the walkthrough of chapter 2: Newcomers, of A Plague Tale Requiem, showing some tips, tricks, or solutions on how to complete the chapter.

A Plague Tale Requiem: Newcomers follows up with the group’s arrival at the town where they will be staying and meeting up with Magister Vaudin in the hopes of finding a cure for Hugo.

Walk to the house

For the first part, the siblings get to explore and wander within the streets of the town and check out the marketplace. They also get to talk to the local florist for a while. Head further down the path past the florist, and turn right first where you can play a mini-game with the pots and earn the Best Player souvenir.

Make your way up to the housing quarters to find Lucas. As you get back home, Hugo becomes tired, so Amicia tucks him to sleep. After a few moments, Hugo suffers a nightmare caused by the Macula, and Beatrice asks Amicia and Lucas to go find the magister.

Follow the path back to the town. You get to ask a nearby guard, and he will point you to the florist.

Head back to the florist and she will tell you that her husband is the one who have dealt with Vaudin.

Look for the florist’s husband near the path to the arena. He is wearing a brown tunic and is raking leaves from the ground. He will then point you over to the arena where the magister was last seen.

Make your way to the arena and Lucas will point out the Order’s insignia.

Find a way inside the arena

As you try to get in the arena, the guards will not allow you to go through the main gate, so you will have to locate another entrance. Head to the right and you will find a way to get inside the walls of the arena where the first signs of the bite appear with all the corpses lying around.

Make your way through the path and you’ll find passageway that is too high for your reach. Head to the coop and take the cart over to the ledge and then use it to climb up.

You’ll then encounter a mercenary, however he is wearing a helmet so Amicia’s slingshot won’t work. Sneak past the mercenary instead. Then, use distraction to lure another guard’s sight away from your path through the garden.

You’ll arrive at a room with two mercenaries, with only one of them wearing a helmet. You can go to the side rooms and get a clear line of sight to the helmetless mercenary and a crate for a distraction. Hit the helmetless mercenary to make the other one come close to him, and then cross to the other room. Then, hit the tool crate to lure the mercenary’s sight away from the path to the exit door.

Make your way past the piles of corpses and you will see another high passageway. Head out to the left where you will see a hanging half cart. Shoot it down and then bring it over to the passageway to be able to climb up. You will then see a board with a knife stuck to it which you can use to ambush enemies.

You will then end up at the inner grounds of the arena littered with guards. You need to make your way to the path on the left while making sure that you are not spotted. You need to hit the archer on the top platform to make the crossing easier, but save this once you are near the exit so that the archer’s fall will distract the guard facing the door. At this point, depending on whether you played stealthily or engaged with the enemies, Amicia will gain a skill point to a related skill tree.

As the two try to traverse and make their way to the south tower, they accidentally fall into the sewers where tons of rats are living. They meet another person, but he unfortunately gets devoured by the sea of rats. You then need to make your way back into safety to avoid getting caught in the wall of rats.

At this point, you will then relearn how to use fire to protect yourself from getting swarmed. Use the nearby torch and make your way to the brazier to light it up. Then, place the torch on the wall and climb up the wall.

After making it through, you will have to cross a wooden beam. You make it through, but Lucas falls down, but he makes it to safety. Use a stick to light another brazier at the far end. Then, light up another stick and throw it to the brazier on the other side where Lucas is. Throw another stick to Lucas so that he can use it to cross safely. Afterwards, you can then climb up the ladder to the next area.

You will arrive at a huge chamber with a hanging platform and a brazier in the middle. Find the crank and use it. This will open up the gates and let the rats in, so you will have to find another way to lower the platform.

Explore the nearby alcoves for any material that you can use to craft an ignifer.

First, you need to get sulphur from the nearby alcove. Head up the ladder first, and then let Lucas operate the crank. Head back down and then ride the platform and tell Lucas to bring it up. Get the cart nearby, load it on to the platform, then tell Lucas to lower you down. Bring the cart over to the sulphur spill, climb up on it, then grab the sulphur from inside the chest.

Next, you need to go to the next alcove. Cross the ledge on the right, then shoot two hanging carcasses to bring them down and lure the rats; one near the ledge, and the other one on the far corner of the room. You can then climb down the ladder, grab the alcohol from inside the chest, then climb back up and out the alcove.

You then have to craft some ignifer with the materials you’ve gathered. Access your inventory and craft it from there.

Light up the central brasero

Load up the ignifer on your sling by choosing the ignifer as the ammo. Then, make your way to the nearby arch to the right. Light up the brazier to repel the rats, then take the loot from inside the chests nearby. Craft ignifer pots this time and throw it at the ground where the rats are to clear them out. Then, instead of using the ignifer, shoot the carcass on the corner of the room to lure the rats. Get the loot from the chest on the other side first before heading up.

You will then arrive back at the surface. You’ll pass by a garden where you’ll get the Arrowhead herbarium collectible.

Explore the platforms and houses ahead to get more ignifer materials and a knife, if needed. Once done, head to the tight space blocked by a plank and squeeze through it.

You’ll arrive at another part of town that is patrolled by the mercenaries. Use the tall grass to sneak through and make your way to the side near the houses where there is more cover. Just make sure to be careful of any mercenaries inside.

Eventually, a guard will start running out as the rats manage to reach the surface. They are protected by the light for now, so you will still need to sneak through them while being mindful of the rats. The door is on the opposite side of where you are and you can either go to the houses on the left or on the right. Be careful as there are some archers within the houses and walkways.

Aside from brazier, there are also fire posts that you can light up along the way. As you arrive at the door, you will need to light up at least one of the two braziers beside it to clear the rats. However, there will still be a barrier of rats blocking a clear path to it, so grab a stick nearby and light it up so that you can pass through, or you can use an ignifer pot if alerting the mercenaries won’t be a problem.

Put the symbols in the right order

You will then arrive at The Order’s Lodge, but the door to the next area is locked. Thankfully, Lucas figures out a way o how to solve the combination locks without needing a single key.

You will need to find the right symbols for each of the “cylinders”. The symbols will be described by Lucas and he will also tell you the order of their placement. You need to hit either the left or the right side of the cylinders to rotate them.

Here’s the solution, starting from the left cylinder to the right:

Once done, the door will be unlocked and then you will meet Magister Vaudin. The final scene for this chapter will show the group arriving back at the house to start curing Hugo.

Here are the trophies that can be obtained in Chapter 2:

Check out our A Plague Tale Requiem – Chapter 2 Collectibles Locations guide to make sure that you don’t miss a collectible.

Check out this video by theRadBrad showing gameplay for Chapter II – Newcomers: