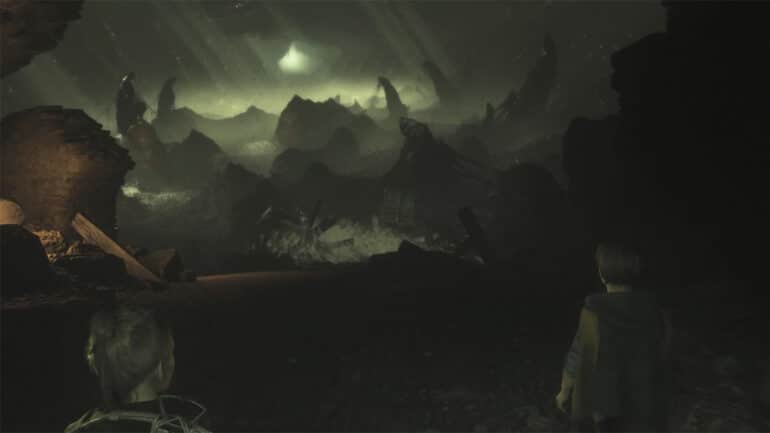 Nothing Left is the thirteenth chapter in A Plague Tale: Requiem which follows Amicia, Hugo, and Lucas as they just barely managed to escape from the events in the theatre. Now they have to make it back up the surface and try to find a way to leave the island for good.

In this guide, we will go through the walkthrough of chapter 13: Nothing Left, of A Plague Tale Requiem, showing some tips, tricks, or solutions on how to complete the chapter.

A Plague Tale Requiem Chapter 13: Nothing Left starts off with the siblings and Lucas just after recovering from the fall. As Amicia is badly hurt from her encounter with the Count, Lucas offers his help to lead them in finding the exit to the surface.

Find a way to the surface

Follow Lucas to the surface. As you arrive in the cellar, turn right to get a huge chest, then head back to the main cellar and check the chest. Move ahead to find a workbench.

You’ll then arrive at a ruined section of the palace that shows an opening. Check the bars on the right and shoot through it to hit the chain on the door. Go through the door and you’ll get a chest inside. Then, pull the huge bookcase backwards to unblock the path ahead. Head out and go to the unblocked path, turn left, then jump over the fence. To the right, move another bookcase to reveal a path that leads to the A mess souvenir.

Head back out and check the chest and pieces nearby. Use the rope pole and shoot a rope towards the bookcase on the top level. Pull it down to make it roll towards the wall. Amicia and Lucas will try to pull it and fail, but pushing it will reveal the rat nest.

As you arrive at the rat nest, grab the torch on the left. Make your way through the nest while avoiding the nebula coming from burst rat sacs. At the end of the path, you’ll arrive at the huge rat sac. Hugo wants to stay, but Amicia won’t let him, angering the nest. A chase will happen and you need to follow Lucas to escape the place.

Once you’re out of the nest, continue moving through the path ahead until your reach the overview of the village.

Walk further ahead until you see the ridge full of rats. Hugo gets a hold of himself and commands the rats to clear out of the way. Go down the ledge then check the chest along the way. Hide in the tall grass to avoid the incoming soldiers.

Use an exstinguis pot on the torch once the soldier is near the lamp, then pop the rat sac and use Hugo or odoris on the soldier to lure the rats to him. Light up the lamp again and check the chest nearby. Go to the next guard who can be eliminated using the slingshot. Afterwards, climb up on the right ledge to reach a chest. There will be a shielded soldier below that can be eliminated using the slingshot. For the soldier to the right, pop the rat sac then use Hugo or odoris to lure the rats to him.

Head to the next ledge ahead, use exstinguis on the soldier’s flail and then pop another rat sac and lure the rats to him. You’re near the exit which is a bit too high, so head towards the cart and shoot its chain to make it roll to the ledge. Climb the cart to reach the next area.

A cutscene will play showing two passing soldiers talking about Arnaud. Despite Amicia’s protest, Hugo wants to save him.

Head to the shack on the left and take out the soldier with exstinguis. Then, clear the rats ahead with Hugo or odoris to get to the next staircase. You can eliminate the soldier ahead by shooting at the tar pot he’s holding. Continue hugging the path to the left until you reach the church. One soldier will be hanging out near the cliff, while a flail wielding soldier will be patrolling the church. Eliminate them accordingly and loot the huge chest inside.

Make your way to the fallen bellfry and run through it. At the end of it, go through the window to the left to see a workbench. Climb the ledge and check the corpse to the right for some pieces. Go through the flower arch and check to the left for a chest.

Get the cart on the right and move it to the left ledge first. Climb on top of it and you’ll get the Greylag goose feather collectible. Head to the door on the right to find another locked workbench.

Afterwards, move the cart to the ledge on the right, then jump down the ledge and head to the execution site.

Once you’re near the execution site, shoot an ignifer at the tar pot to eliminate most of the soldiers. Continue to kill the other soldiers as they come in waves. Heavy shielded soldiers will also be joining in; you need to stagger them first or make a tank explode near them so that they expose their chest where the chain for their armor is. Shoot the chain to remove their armor and they can be burned or shot. They can swat away projectiles with their shield so it’s best to use other means of staggering them like stupefacio on a torch.

After a couple of waves, you’ll get a chance to free Arnaud, but more soldiers will come in. Hugo steps in and stops them using the rats. Approach Hugo afterwards to proceed. The scene ends as they manage to get back to Sophia’s boat with Arnaud.

Chapter 13 – Nothing Left Trophies in A Plague Tale Requiem

Here are the trophies that can be obtained in Chapter 13:

Check out this video by BestGamesJustin showing gameplay for Chapter 13: