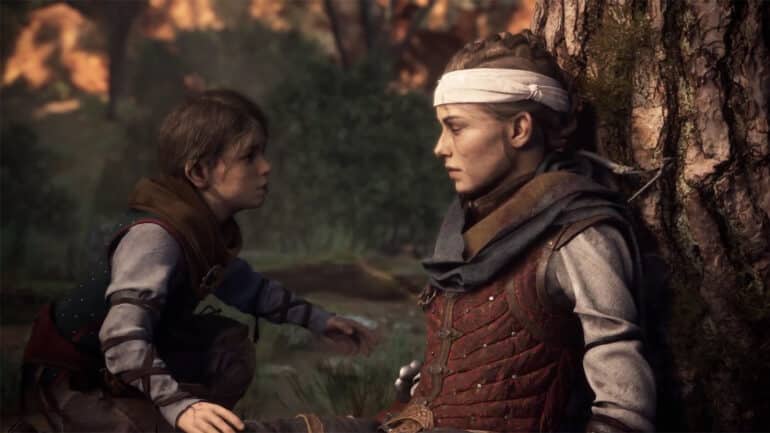 Felons is the seventh chapter in A Plague Tale: Requiem that follows the rescue of Amicia by an unexpected person, Arnaud, who has decided to ask for the siblings’ help to get away from the wrath of the Count. With another ally on their side, they make their way to the mysterious island, La Cuna, where they hope they will find the cure to Hugo’d Macula.

In this guide, we will go through the walkthrough of chapter 7: Felons, of A Plague Tale Requiem, showing some tips, tricks, or solutions on how to complete the chapter.

A Plague Tale Requiem Chapter 7: Felons, starts off with a still recovering Amicia who is shocked to know that it was Arnaud, the very man who tried to kill her, who came to her rescue from being devoured by the rats.

Catch up with Hugo

After having a dialogue with Arnaud, follow Hugo as he runs towards the cliff. Up there, you’ll find the island where you are supposed to go. Arnaud will then tell you that he knows someone that can take you there.

As you walk along the beach, head to the left towards the shack where you’ll find a knife. Check the path near the shack where you will find the Black Headed Gull collectible. Then, go to the boat and pull the rope attached to it.

Rats will start to appear from behind the boat, so use Hugo to move the rats away towards the fallen fish. Then, head inside the cave.

Follow the path inside the cave while picking up the bolt along the way. Shoot a firebolt on the wooden board to get some light, and then shoot the lamp across with ignifer.

Then, jump down and look behind the wooden board to see a chest. Use a tar sling on the lamp then quickly move towards the ledge and climb up on it. Check the left side for a chest, then climb higher to see the shipwreck.

Grab a stick and light it up, then head back down and run to the right. Continue moving forward to reach the rat nest. Pull the rope to get the brazier cart, light it up and use it to go through the rat nest. Check the left wall to see a room with a huge chest.

You’ll arrive at a huge cavern. Walk towards the ledge to the left, but Arnaud will fall down. Use ignifer to light up the lamp near him. Then, tell Arnaud to get episanguis and throw one at you.

Open a way for Arnaud

Get out of the caves

You then have to shoot Arnaud’s shield with a firebolt so that he can use it to go through the final stretch of the nest. Once you’re out, jump down the platform and you can head to the left wreckage for a workbench. You can also find The Survivor souvenir beside the shipwreck by climbing up the ledge ahead.

Head towards the cave and shipwrecks where soldiers are patrolling. Use tar on the campfire, then loot the chest and some episanguis. Check the back side and then light the hay bale. Quickly head tot he chest, loot it, then head back before the fire runs out.

Cross towards the next campfire using odoris or tar. Afterwards, grab a stick and light it, then head into the hole of the ship. Grab the torch by the wall. At this point, eliminating the guards will allow you to bypass the rats, but if you want to do the sneaky round, place the torch on the other side of the ship then climb up to the upper deck. Head towards the other side of the ship, then shoot the wooden board with firebolt so that you can reach the chest. Use tar on the nearby campfire, then you can pull the crate down and use odoris on it so that you can sneak up the ledge.

Regardless of the path you take, head to the end of the cave and squeeze through the gap. You’ll then have to wade through the water until you arrive in Sophia’s hideout.

After a dialogue with Sophia, you can then continue heading outside where more soldiers are patrolling. You can then tell Arnaud to attack the soldiers for you. He can only attack one soldier at a time and you can help speed up the fight by shooting the soldiers with stones to stagger them and leave them open for a killing blow.

Hug the edge of the water and you’ll find a chest and a bolt, then turn around where you’ll find another chest. Then, just make your way through the beach using Arnaud to clear the soldiers out. You can then climb the ledge at the end of the beach.

Back on the beach, head to the patch of sand where you can pull a rope to get a boat with a huge chest in it. Enter the cave to the right and clear out the soldiers inside. As you exit the cave, eliminate the two guards then head to the gap in the rocks. Immediately after squeezing through, turn to the left to find a cave where you can find The First Men souvenir.

You’ll then arrive at the fishing village where you can sneak through the fishing huts which are filled with patrolling soldiers. You can take the stealthy route by snuffing their torches and letting the rats underneath take care of them. Check out each hut as they have chests in them for materials. You need to get to the door guarded by the mace-wielding soldier, so have Arnaud eliminate him.

A cutscene will then play where Arnaud takes Hugo to see Sophia’s ship. Another cutscene will play with Sophia being attacked by a soldier. Help her out through the QTE sequence to continue.

You then have to prepare the ship for the sea. Sophia will tell you to raise the anchor, but before doing that, check the shack on the other side of the boat. Shoot the chain on the floor to open a trap door, then shoot the hanging fish to make it fall to the ground and attract the rats. Then, head to the shack and to the crank nearby. Tell Arnaud to move a chain out of the anchor’s way, then shoot the chain that connects to the weight.

Head back to the ship and move the crank on the bow of the ship to raise the anchor. Go to the upper deck to hoist the sails. The sail will be tied up on one side, so move to the dock on the right and shoot the chain off the sail with your slingshot.

The chapter ends showing Amicia boarding the ship as it sails to La Cuna.

Here are the trophies that can be obtained in Chapter 7:

Check this video by ZeroEdIN showing gameplay for Chapter 7: