Asterigos Curse of the Stars – How to Beat The Twin Colossi 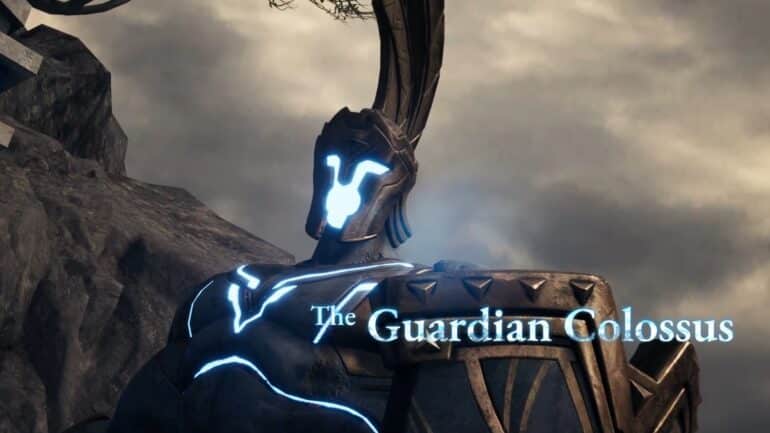 The Twin Colossi are the guardians of the Styx Bridge. They are also the fourth major bosses in Asterigos Curse of the Stars. But you don’t immediately start the encounter fighting. The start of the Styx Bridge encounter involves a fight between Hilda and the Centurion assigned to protect it as well as the superweapon powered by the Iris.

There’s nothing particularly special about this fight apart from you dodging lasers. It shouldn’t take long to finish this fight and proceed to the real boss fight.

In this guide, we’ll tell you how to defeat the game’s fourth main boss, The Twin Colossi.

But before we go any further, please be reminded that you if happen to find 5 Salve while walking to a space that may look like a doorway, you’re actually nearing the boss area. Pick them up as often as possible. They’ll keep reappearing every tie you go back for another round. A vendor close by is another hint that you might be close to a boss encounter.

How to Beat The Colossi

All the weapons do well in this encounter. Maybe not so much for the Staff because you will be required to get close and cozy to a Colossus in a barrier. Though you may want to have the Staff skill that increases your attack power in a certain range.

We start the encounter with one of the statues coming to life. It carries a spear and shield on both hands but it’ll be its foot stomp you want to watch out for. The shock waves do a surprising amount of damage really fast. On the bright side, the waves push your way but you still take a considerable amount of damage first.

Your best bet is to keep attacking it at its heel. Literally. Ignore all his fancy shield strikes and spear stabs. Just keep chopping at him until the next phase starts.

The next phase sees another statue coming to life near the Academy’s side. This one carries a hammer, instead of a spear. And like the first statue, it too is fond of shock wave attacks. And speaking of the spear-wielding Colossus, it is now powered up with yellow lightning.

How to Beat the Twin Colossi

This is where the real fight begins. The spear Colossus will take a position by the Styx gate while the Hammer Colossus pursues you. Keep an eye out for the Spear Colossus. It’s going to emit electrical traces on the floor. They shoot in straight lines of three. They do a considerable amount of damage, so you may want to be extra careful.

You can play defensive for a while. At least until the Spear Colossus stops shooting at you.

It is worth mentioning now that it doesn’t matter which Colossi you damage. Both share the same health bar. And the phases will change the same way regardless of who you decide to deal damage to.

After the barrage, both statues will start to pursue you this time. It is hard to get a combo in when both Colossi are working in synch. So you’ll want to bait out an attack from the closest statue. This will stop that statue from moving. The other statue will continue to move toward you. Bait out an attack to make them stop, and once they are attacking then go for their heels.

At around 2/3 health, the Spear Colossus will jump back to the end of the bridge again. When he does that, it means he’s setting up a massive area attack. Anything caught in the field will die instantly. To protect yourself, you’ll have to go to the other side of the bridge and enter the force field erected by the Hammer Colossus.

While you’re inside the field, you’ll be safe from the AoE outside the bubble. What’s more, you will have a limited amount of time to do as much unguarded damage to the Hammer Colossus. Of course that all ends once the Spear Colossus finishes its attack.

At 50% health, the Hammer Colossus will the one to be supercharged. In this state, he will be less mobile but will channel a pinpoint pillar of light attack with a timed delay. You may want to take this time to do damage to the Spear Colossus.

At about 1/3 health, the massive area attack will begin again but it’ll be the Hammer Colossus doing it. So, the same routine – go to where the Spear Colossus is, and deal as much damage as you can get away with.

The Twin Colossi will keep traded charged up states until the health bar reaches 0.

Defeating this particular boss unlocks the Martyr Fell Trophy/Achievement. You will also get the Damaged Legion Trinket and the Blessed Oil of the Three.

And that’s how you defeat the Colossi. I hope this guide was helpful to you. Till next time.

And check out this video from YouTuber Jaba Play whey they show footage from all the boss fights plus all the possible endings in the game.