Here's how you can defeat Baraad, Lord of the Black Street 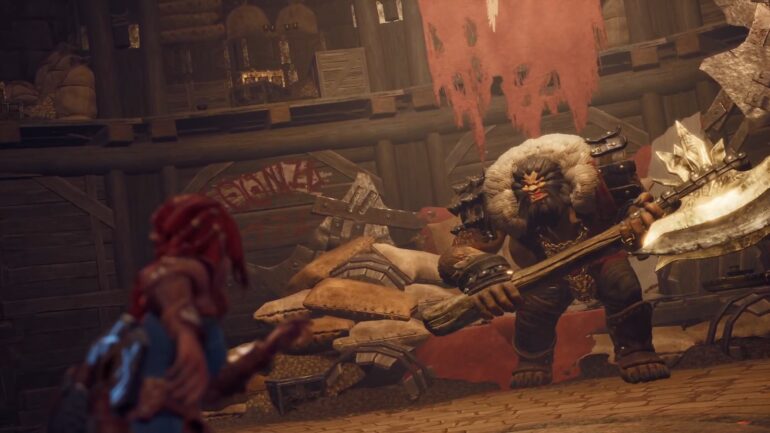 As usual, if you happen to find 5 Salve while walking to a space that may look like a doorway, you’re actually nearing the boss area. Pick them up as often as possible. They’ll keep reappearing every time you go back for another round. A vendor close by is another hint that you might be close to a boss encounter.

Baraad is located in his makeshift throne room inside the main grain silo at the very back of the bandit fortress. He is an agile brute whose skill with the war axe can give veterans a moment of pause. But what makes Baraad a true powerhouse is the red ring on his index finger. With it, he can summon waves of fiery fury.

When dealing with the bandit leader, you’ll want to stay light on your feet. You may also want to bring the Staff with fire magic equip. I’ll explain later.

The thing you want to watch out for are the fireballs he shoots out of his ring as well the fire aura he emits when he activates his ring. His fire attacks in particular have a bigger hitbox than what you see on screen. Give them plenty of space if you want guaranteed safety.

Baraad starts with a defensive posture as if he’s baiting you to move forward and strike first before lurching forward menacingly. If you get too close to him, he’ll open with an axe struck powerful enough to kick up dust. Your best bet is to jump dodge in the direction of his strike so you have some space between you and the axe. Timing is key here. Make sure to abuse those invulnerability frames as much as you can. Those axe hits can potentially take as much as half your maximum health.

One of his attacks involves pausing a bit before launching an attack. This is a sign that he’s going for an overhead strike. It’ll cause a wave attack in front of him so your best bet is to dodge to the side and keep a bit of distance. The waves have an after effect that can still hurt you if you are stationary.

The spear does wonders for the early stages of this fight. The axe might cause a lot of damage but its slow windup makes it really easy for you to counter with the spear. Do note that it only works with the basic strikes. Once Baraad start using overhead strikes, countering is no longer possible.

At 2/3 health, he’s going to roar. When he does that, he’ll start using his fire ring to launch fireballs and enchant his axe with a fiery aura.

The same also applies when he does an ember spread shot. The weirdest thing about this attack is the fact the hitbox lingers a little longer than I expected as if the floor beneath you is damaging you.

Another attack potentially happens when he is wrapped in an aura of flames. It appears to be a channeling attack that first starts as a thin sliver emitting from the ground and turns into a small pillar of flame. Be careful not to walk into those.

Once he becomes enraged, Baraad will start charging into the walls of the granary. When that happens, you can do one of two things – stay away or follow behind him. Do not follow him! For whatever reason, even if you trail behind him, you’ll still get hurt. So it might be better to give him plenty of space until he hits a wall.

What you can do, however, is have your Staff equipped, and with your fire magic online, ignite the floating granary dust in the air. It does a bit of damage but it is damage from a safe distance. So there’s that.

When Baraad’s health is lower than 50%, he’ll start to use a flame burst attack that covers the entire arena. Thankfully, you can counter this by, again, abusing invul frames. Wait for the flame wall to get somewhat close and just dodge roll to the side. The flames will pass by without hurting you.

At this point, he’s going to be far more aggressive. Be very careful not to hit too much or you’ll be dead very quickly. Honestly, you may need to show some aggression in this part too. Unless you’re really confident in your dodging skills, you really can’t afford a prolonged final phase.

Defeating this particular boss unlocks the Cutthroat Trophy/Achievement. You will also get a Damaged Silver Trinket and Blessed Oil of the Three.

And that’s how you defeat Baraad. I hope this guide was helpful to you. Till next time.