Asterigos Curse of the Stars – How to Beat Raveneous the Devourer

Here's how to defeat the vicious croc, Ravenenous the Devourer 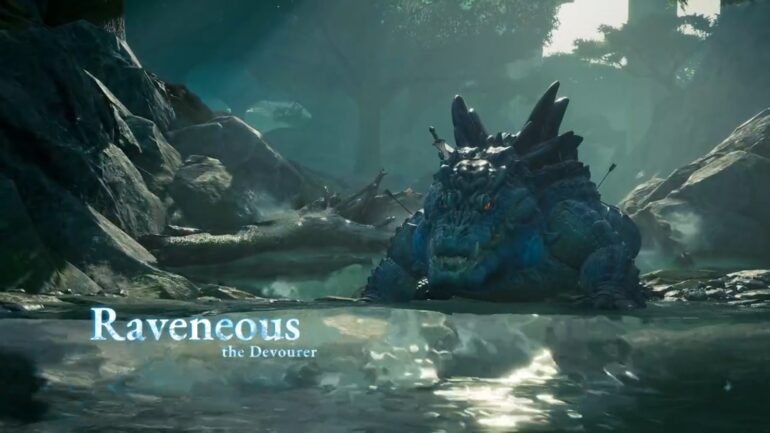 The first boss fight in Asterigos Curse of the Stars, Raveneous the Devourer is a giant crocodile that’s very aggressive against anyone it comes across. Hilda encounters the Devourer after making it through the forest and nearing the walls of Aphes.

In this guide, we’ll tell you everything you need to know to beat the game’s first boss – Ravenenous the Devourer.

If you happen to find 5 Salve while walking to a space that may look like a doorway, you’re actually nearing the boss area. Pick them up as often as possible. They’ll keep reappearing every time you go back for another round.

How to Beat Raveneous the Devourer

Ravenous is a hulking beast that is more interested in making noise than it is in attacking you. But you’d do well not to underestimate Raveneous. It is an apex predator that will literally jump at the opportunity to attack you if you allow it. Its opening attack sees the Devourer doing a cannonball flop toward you. Stay mobile and dodge roll if you like it’s getting close.

Don’t worry about which weapons to use on lower difficulties. They all work well to some extent. But heavy hitters like the spear work better than the Staff because it is better at stunning the monster.

There are two places you’ll need to constantly be on the lookout for – its massive tail and its snapping jaw. You can try to attack it head-on but you’ll find it difficult as you’ll be likely trading blows with a snapping head with a lot of health.

Instead, go for the flanks. Its sides are the most vulnerable part of its body and with you keep attacking there, Raveneous will be forced to constantly rotate its massive body in an attempt to get at you. Keep at it until it is forced to jump back to reassess its position or thrashes around wildly.

Do not sleep on its tail either. Raveneous is known to do wide swings with its tail when things don’t start going their way. It does a noticeable amount of damage so you may want to keep your distance if you notice the tail winding up for a swing.

Raveneous the Devourer is a water elemental that shoots water magic from its jaw. Watch out for the telltale signs of it breathing in deeply. That’s a sign that it’ll either shoot a magic bubble at you. It also has a quicker hydro blast attack that sweeps from side to side. Do watch out for that.

Performing critical strikes on the head has a chance to stun the creature for a short amount of time. The best weapon for the job would be the Spear. Sword and Sword can work too but I’ve found that it is better to stay mobile than it is to stand your ground.

It being stunned is also the best time to use your Burst Attack with the Sword and Shield and Hammer.

At around 50% health, Raveneous will start to incorporate a new attack into its moveset. It will get on its hind legs and push itself forward in the hopes of crushing you with its massive frame. It is best you avoid these attacks, especially if your health is a little low.

It will also become more aggressive in its attacks. And it incorporates more wide swings with its tail when it can. Keep your cool, look for gaps, and strike when it appears like it stops attacking.

At 1/3 health, it will start roaring more frequently. Do not flinch when it does. It’s practically an invitation to start walloping it. After its roar, however, you’ll have to be on the defensive. It’ll be faster and much more aggressive than before. Wait for it to stop attacking or wait for it to roar again.

Keep the pressure up. It will go down eventually.

Defeating this particular boss unlocks the Killer Croc Trophy/Achievement. You will also get the White Starlite Brooch and Northwind Legion Dagger. The latter you can present to someone in the legion when you find them.

And that’s how you defeat Raveneous the Devourer. I hope this guide was helpful to you. Till next time.