Learn how to get this pursuit grenade launcher 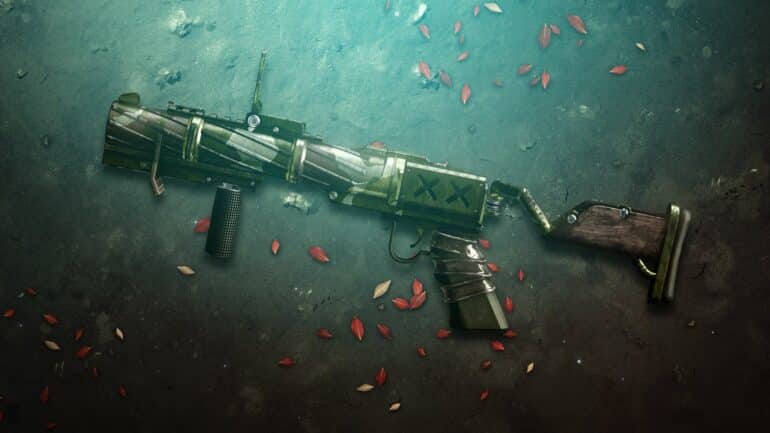 If you’ve been looking for a guide on how to get the Destiny 2 Salvager’s Salvo for yourself and all three of its ornaments, then this guide is just perfect to help you.

The Salvager’s Salvo in Destiny 2 is the pursuit weapon grenade launcher added to the game after Season of The Hunt. Like the Malfeasance Hand Cannon, it can take a bit of work to unlock it and all its ornaments. Thankfully the process of unlocking Salvager’s Salvo is nowhere near as complex or as taxing. And unlike The Thorn Armor Set and the Gjallarhorn Catalyst you don’t have to buy the 30th Bungie Anniversary Pack to acquire the Salvager’s Salvo.

Destiny 2 How to Unlock Salvager’s Salvo

To unlock Salvager’s Salvo, you have to partake in Messy Business. You can get this quest from Banshee-44 who is the Exo gunsmith in the Tower.

The Messy Business quest involves earning points in a variety of its playlist by defeating other combatants. The parameters from the official notes in the game are as follows.

You can progress through the challenges on any playlist activities. This was unlike the previous pursuit objectives which required a more linear path.

However if you wish to get your hands on Salvager’s Salvo much sooner then there are a few steps you can partake in. For example, winning Crucible and Gambit matches fills out the quest steps much faster. Partaking in Nightfall strikes also give you a certain bonus.

Take advantage of killing other combatants with your grenade launchers and grenades. As per the details above, you’ll get bonus progress for any kills you deal out with those weapons. If you’re worried about the grenade launcher’s relatively low ammuntion count, you can equip ammo finder mods to scrounge up some in the middle of the battlefield.

Regardless, earning the Salvager’s Salvo after completing Messy Business will take some time and dedication. Our best advice is to play the way you enjoy playing Destiny 2 so it doesn’t feel like a grind at all.

After you’ve unlocked Salvager’s Salvo you can further customize it through its three ornaments. You can get these by doing their respective quests from Zavala, Drifter, and Shaxx vendors in The Tower.

The three ornaments for the Salvager’s Salvo are as follows.

You can unlock each one of them by going to a specific vendor in The Tower. On the bottom, you’ll find which vendor you’ll have to go to for each ornament and what you have to do for them.

To get the Pyretic Ornament, you’ll have to go to Shaxx and take his Crucible Salvager Quest. You can find Shaxx in The Tower along with the other vendors.

Shaxx will task you with gaining six Valor ranks and getting a total of 30 Grenade Launcher Final Blows. To complete the latter much easier, you can string opponents together in order to increase your odds of scoring a Final Blow. Gaining Valor ranks requires that you reach the end of the ranks just before the next cycle.

What’s great about this is that Valor it is a non-competitive ranking system. You don’t need to worry about losing matches and seeing your progress to completing the quest deducted.

While the Crucible Salvager quest is fairly straightforward, it can be a bit of a grind to deal with. Especially in regards to gaining six Valor ranks. If you really want to unlock the Pyretic Ornament which is required to complete the Kill Them With Style Seasonal Challenge then you may want to wait until the weeks where there is an increase in Valor.

To complete Kill Them With Style, you have to do the following.

To get the Toxicology Ornament for Salvager’s Salvo, you’ll have to go to Drifter and take his Gambit Salvager quest.

Like Shaxx, Drifter will task you with Grenade Launcher Final Blows. However, to complete the Gambit Salvager’s Salvo Seasonal Challenge, you also have to Bank Motes.

You can increase the speed of finishing this challenge by rapidly getting rid of your targets in Gambit.

To complete Gambit Salvager’s Salvo you have to do the following.

To get the Panacea Ornament, you have to talk to Zavala and take her Strike Salvager Quest.

Like Shaxx and Drifter, Zavala will task you with dealing Grenade Launcher finishing blows. Only this time, you’ll also have to partake in playlist strikes.

To complete Decisive Strike you have to do the following.

And now you know how to get all three ornaments for Salvager’s Salvo. Check out this YouTube video from KrackisHD in how to get the pursuit weapon fast.

For more Destiny 2 related content, check out our other articles.