Including how to get the Toilet Break trophy, cause why not? 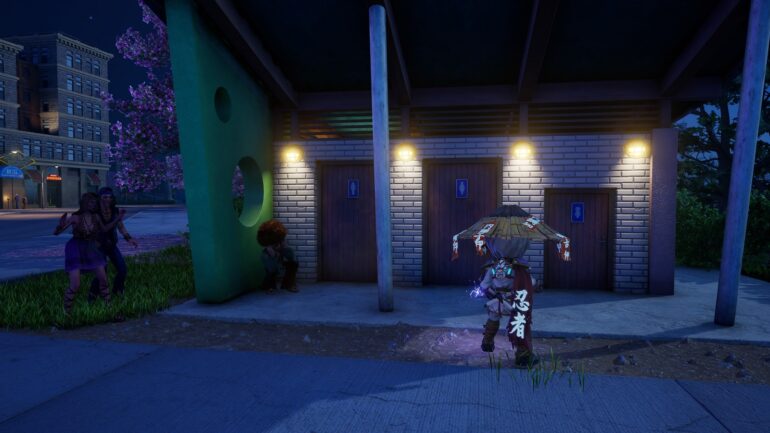 Honestly, we don’t know what the human cattle hidden hives are in Destroy All Humans 2 Reprobed. We only knew of their existence after the trophies were revealed. It was a completely different reaction when we found out about the “Toilet Break” trophy. (Cause I was finding all sorts of porta potties all over the place and I couldn’t help but laugh.)

In this guide, we’ll show you all the locations of Human Cattle Hidden Hives in all 5 regions of the game. And as a bonus, we’ll even throw in the locations of some public restrooms. For the sake of trophy completion and honestly, there’s not much content there to justify making a really short article about random toilet locations.

Unlocking the “Human Cattle Hidden Hive” trophy is a little tricky in our opinion. Firstly because the buildings are unassuming. And secondly, the only way to find them is to listen closely to the sound of music. If that building is playing music, that’s your target.

(Unfortunately, in the PS5 version of the game, some of the buildings didn’t even emit any music, so we got some help on this one. We still don’t know what goes on inside these buildings besides the music playing btw.)

Oh, and one more thing, you NEED to use your saucer’s weapons on this one. Any other weapon will not count towards trophy progression. Even if you use meteor strike to turn the building into a pile of rubble.

The description of the trophy says: Use your saucer’s weapons to scare human cattle out of their hidden hives on each map.

How to Unlock Toilet Break Trophy

To unlock the “Toilet Break” trophy, You’ll need to destroy a public restroom on each of the game’s five maps. Some maps have unique-looking ones (I’m looking at you, Bay City) while others are as simple as generic outhouses and porta potties. They all count and if you’ve looked over the maps for as long as we have, they start to be unique.

The description of the trophy says: Demolish a public toilet on each map.

The Human Cattle Hidden Hive in Bay City is a warehouse South of the city. If you approach it, you’ll start hearing Spanish guitars playing. Also, we don’t know if destroying the silo counts too so we destroyed it anyway.

One of the first things we noticed in our playthrough of the game. It was funny because initially, we thought it was a child’s restroom. Upon closer inspection, the symbol on the door was a little green man. Also, the smaller door was a perfect height for Furons.

For the second time, we had to destroy the Soviet Embassy in Albion. Why? It was due to them stealing state secrets or anything. The sound of Russian music can be heard outside. That was enough to warrant its destruction.

It’s an outhouse in the middle of the construction yard. We were expecting brightly colored porta potties. But oh well.

The Human Cattle Hidden Hive in Takoshima is a warehouse in the middle of the city’s wharf. But you wouldn’t know it. For some reason, you won’t be hearing anything coming from the building, at least on the PS5 version.

It’s an outhouse that serves the personnel guarding the bunker overlooking the beach South of the map. You have a view of the ocean while you do your “business”.

The KGB office in Science Town is the location of the next human cattle hidden hive. It was like the instrument playing back in Albion but this time you can hear the Russian singing along with the song.

This toilet can be found in a secluded spot East of the map where you can find elements of the Russian mafia.

In space, no one can hear you sing apparently. Another silent building North of the South-most moon domes houses the last of the hidden human cattle. It seems like any place with a sizeable gathering of humans overrides the music of these places. Can’t confirm though. We simply… destroy.

For this one, you have your pick of space porta potties. This one is located at the very most Eastern point of the map. There are other more recognizable ones like the secluded blue porta potty. That one has got to have story behind it. Or someone really, really likes their privacy.

After you’ve gone around destroying the threats to the Furon empire, the trophy messages for both “Hidden Human Hive Harvest” and “Toilet Break”.