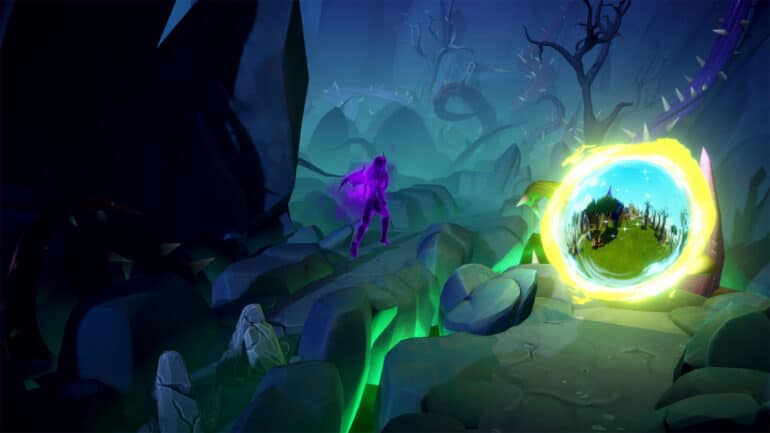 Nature and Nurture is one of the newest quests added in Disney Dreamlight Valley along with the introduction of Scar into the game. The Sunlit Valley was once a nourishing place, but ever since the Night Thorns have made their way into the spring and blocked the stream of water, the ecology in the plateau got dramatically altered.

In this guide, we will talk about how to complete the Nature and Nurture quest in Disney Dreamlight Valley.

How to unlock the Nature and Nurture quest

To unlock the Nature and Nurture quest, you must first complete the story quests With Great Power… (Merlin) and The Curse (Mother Gothel). You must also have access to the Sunlit Plateau. Once the requirements are fulfilled, a cutscene will play showing the entrance to the Giant skull in the plateau opening up, which starts the quest.

How to complete the Nature and Nurture quest

Follow the steps ahead to go through the quests. Pointers to take note in some particular steps will be listed as well.

Investigate the Giant Skull in the Elephant Graveyard of the Sunlit Plateau.

As soon as the cutscene ends, head towards the Sunlit Plateau, go to the giant elephant skull and go inside.

Talk to Scar and he will tell you about the situation in the plateau and that you have to investigate what has been causing the bad water to flow through the river.

Go to the river in the plateau and go inside the new cave where the water is pouring out from.

Explore the Vitalys Mines and find whatever’s blocking the river

You will arrive inside the Vitalys Mines. From the entrance, you can already see the spring where the water comes out from, but you will have to take the long route to get to it. Follow the steps below to navigate through the mines easily:

Check the sign next to the barrel in the Vitalys Mines

Once you’re at the spring, look at the sign next to the barrel. You will get details about the items that you will need in order to create an explosion to dispel the night thorns.

Search the mining camp in the Vitalys Mines for the Ingredients

Head back down the ramp and check the nearby green chest. You will then get a Dried Ginger, a Crackling Candy, and the Root Beer Recipe.

Tell Merlin about what you’ve found

To exit the mines, just break the rock that is blocking the shortcut to the cave entrance. Head to Merlin and he will tell you about the Extra Fizzy Root Beer that could blow the night thorns up.

Prepare the Extra Fizzy Root Beer at a Cooking Station

Go to a cooking station and mix the following ingredients:

Cooking these will give you the Extra Fizzy Root Beer.

Go back inside the mines and place the Extra Fizzy Root Beer and the Crackling Candies in the barrel near the spring. This will remove the night thorns around the spring and making good water flow through the plateau once again. Before exiting the mines, loot the chest across the raft.

Follow the Forgotten through the Dark Portal near the Elephant Graveyard / The Forgotten dropped something! Pick it up

Go inside the portal to arrive in the Dark Valley. Then grab the Orb of Nurturing that the Forgotten has dropped.

Go back to the valley and go talk to Merlin. He will tell you more details on what the Forgotten may be and how it came to existence. He will also take the orb from you to find out how to restore it. He will also tell you that you will need to craft a Miracle Growth Elixir for it.

You first have to gather the materials needed to craft the elixir:

Once done, go to a crafting station and look for the elixir under the Potions & Enchantments tab to craft it.

Go to the pillar at the plateau and dig a hole near it. Then plant the orb in the hole. Don’t forget to water it as well at least once with your watering can.

Tend to the Orb of Nurturing until it’s fully restored

The orb will take some time to be restored, roughly around 2 days of being planted, if watered regularly.

Check on the Orb of Nurturing on the Sunlit Plateau

Once the orb is ready, you’ll see that the “plant” will start bobbing. Harvest it as usual, but instead of getting the orb, the pillar will become rejuvenated instead.

Finally, talk to Scar to complete the quest.

Check out this video by Quick Tips showing how to complete the Nature and Nurture quest: