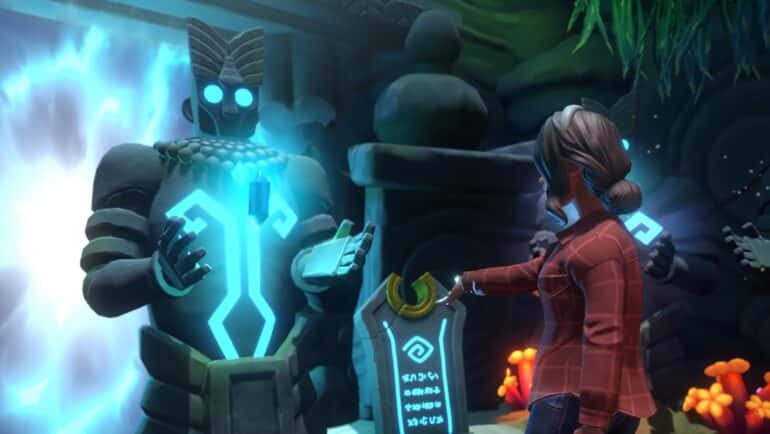 Disney Dreamlight Valley is a breezy, vibrant life sim that does things a little differently compared to games that require heaps of grinding. Even if you are totally into the whole Disney Magic thing, there’s no denying that this game is simple and rewarding in many aspects of play.

In the “With Great Power” quest, players are tasked by Merlin to go to the Mystical Cave and find an Orb of Power. As it so happens, the quest area is in Dazzle Beach and you’ll have to solve a handful of puzzles in order to get the powerful item.

This guide will tell you everything you need to know in order to solve the Disney Dreamlight Valley Mystical Cave riddles so you can get the Orb or Power.

How to unlock the Dazzle Beach Mystical Cave

To unlock the Dazzle Beach Mystical Cave, you’ll first have to have a talk with Ursula. You can find her inside the Cursed Cave. If you look at your map screen, you’ll find the cave North of Dazzle Beach.

After having a conversation with the sea witch, she’ll give you the Crystal Key. This item is used to unlock the Mystical Cave that houses the Orb of Power.

Disney Dreamlight Valley How to Solve the Mystical Cave Riddles

Below, we have listed all the riddles that you need to complete so that you can reach the Power Orb in the game.

The first Mystical Cave Riddle requires the players to find specific gemstones and place them in the corresponding statues. Besides the statues where you need to put the gems, there is a tablet that reads as follows:

Provide the gem that matches best to continue on your hero’s quest.

The statues of glow in green, blue, and red in that specific order from left to right. At this point, you’ll have to bring out your pickaxe and prepare yourself to look for these gemstones: Peridot, Aquamarine, and Garnet.

Peridot can be mined from mineral veins around Dazzle Beach and the Peaceful Meadow.

Aquamarine can be mined from mineral veins around Dazzle Beach and the Forest of Valor.

Garnet can be mined from mineral veins around the Plaza and the Peaceful Meadow.

Once you’ve gathered the gems, place them in according to the corresponding colors. There’s no need to check if they higher class of gem. All that matters is that color matches.

Once you’ve set all the gems to where they need to go, the barrier to the second magic gate will open up for you.

Now that you are able to descend lower and you’ll be in the next chamber where the second riddle is. The chamber features an underwater theme and is generally smaller than other chambers in the cave.

The chamber will have 3 blue statues and a tablet that reads:

Discover the right crops to grow to continue on below. One is underground, the other gold and brown. What remains is red and round.

For this Disney Dreamlight Valley Mystical Cave Riddle, you’ll have to find the right seeds and plant them in front of the statues.

The following are the crops that need to be planted:

Unlike the statues in the first gate, there is no specific order in which these crops need to be planted. If you don’t already have the seeds in your collection or at hand, you can always buy them from Goofy’s stall. You can find it at Meadow and Dazzle Beach. Additionally, the seeds are relatively cheap, meaning you won’t be busting your wallet just to get them.

If players want to find the crops, they can also check out their page on the collection of ingredients. Furthermore, after finding the crops, they need to get the seeds planted under the soil of the statue.

Once you’ve planted the seeds, you’ll need to water them with the help of a watering can. It takes around 25 real-world minutes for the crops to grow and to be ready for harvesting. The moment you harvest them, the second gate will open.

Once you enter the third chamber, you’ll find yourself surrounded by a bunch of rock piles. Take out your pickaxe and clear the room. You don’t really need to do this but it’s better than not doing it. Besides, the tablet that gives the clue for the third riddle is behind a few rock piles.

There is also a chest in front of the third gate. It contains a cosmetic item and the item you’ll need to open the game: a veggie pasta recipe.

The Mystical Cave riddle explains how to do the final part:

The final riddle, let it known: to cook and eat what you have grown.

This is where the veggie pasta recipe comes in.

Using the produce you’ve previously harvested from the 2nd riddle gate, you’ll need to make a dish that makes use of them. To make the Veggie Pasta dish, you’ll need to make use of the stove that’s been conveniently put there. Choose the carrot, tomato, and wheat from your inventory and add them to the pot. You can do this in any order you wish.

It is good to note that you don’t actually need the crops you grew from the riddle. Any old produce will do – as long as they are the ingredients needed to make Veggie Pasta.

And voila! You have yourself a dish of Veggie Pasta.

Now, there’s only one thing left to do in order to open the third gate. Simply open your item menu, select the dish, and eat it. Once you’ve eaten the dish in front of the gate, the barrier will disappear.

After solving all three riddles, you’ll find yourself in the lowest chamber. Here, you will see a pool and a piece of a new language on the floor. Feel free to pick it up.

The tablet beside the pool reads as follows:

One last thing and you can go. Catch the Orb that lies below.

To get the Orb of Power, you’ll need to bring out your fishing rod and you’ll have to fish out the powerful object from beneath the surface.

Once you get it, bring it back to the beach and insert the orb into the receptacle. This will open the cave to the next part of your journey.

And that’s it. I hope you find this guide useful in your quest against the darkness.

Check out this video from YouTuber Game Guides Channel where they show how to solve all the Mystical Cave Puzzles in Disney Dreamlight Valley.