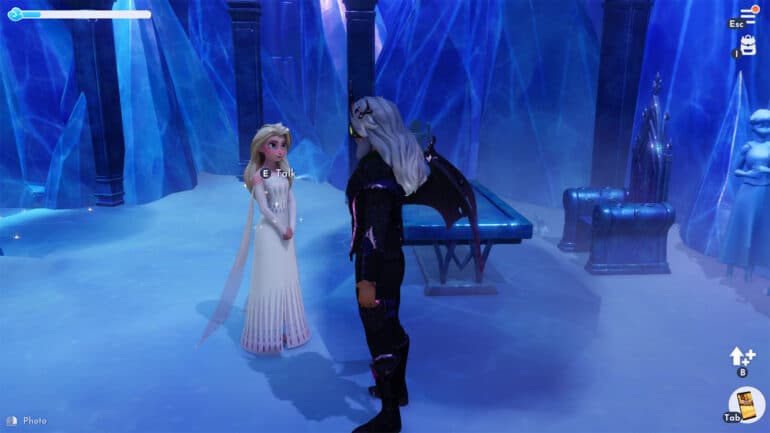 Some players have found themselves in some sort of a glitch where Elsa gets stuck in the house or Ice Cavern despite completing the task of breaking the ice blocks. This prevents the players from progressing through the quest and completing it. There have been different kinds of attempts done to fix this glitch and as of this writing, the glitch hasn’t been patched yet.

In this guide, we will talk about the possible solutions to fix the Elsa stuck in the Ice Cavern glitch in Disney Dreamlight Valley.

At first, you’ll then be sent to create the Warmth of Summer Potion which will then be applied by Elsa on your pickaxe. Afterwards, your pickaxe will then be able to break the smaller ice blocks in front of the Ice Cavern. The next task is to break some more ice blocks within the cavern, but the glitch may happen right after clearing this task.

Despite breaking all the required ice blocks, Elsa will keep on telling you to “break the ice blocks” and seem to get stuck in this dialogue because the task does not get registered as completed.

A fix seemed to have worked for a lot of players who have encountered this glitch. A Reddit user by the name SilentOne1994 has posted this thread showing some steps to work around the glitch.

First off, you will need any villager that have houses on water. The example cited Donald Duck, but Maui seemed to work as well. Then, invite any of them to hang out with you.

Head back to the Ice Cavern and then talk to your buddy. Choose the option “Let’s go see your House!” to teleport into their respective house. Afterwards, exit your buddy’s house to be teleported back into the Ice Cavern. You can then speak with Elsa once again and she should continue moving past her dialogue, allowing you to progress through the quest completely.

Another fix has been reported to have worked, however this involves changing your PC or console’s local time, thus traveling through time in the game. You can try skipping two days into a future date and check to see if Elsa comes out of the cavern. Try doing it one day at a time, checking on Elsa each time before skipping to the next day.

Be warned, time traveling have been reported to have caused some issues with the spawning of items. It is usually fixed by just letting the time pass until the date in the game matches the date in real-time. See our complete guide on Time Traveling Errors and Fixes in Disney Dreamlight Valley.

Check out this video by JayShockblast showing how to complete the Breaking the Ice quest: