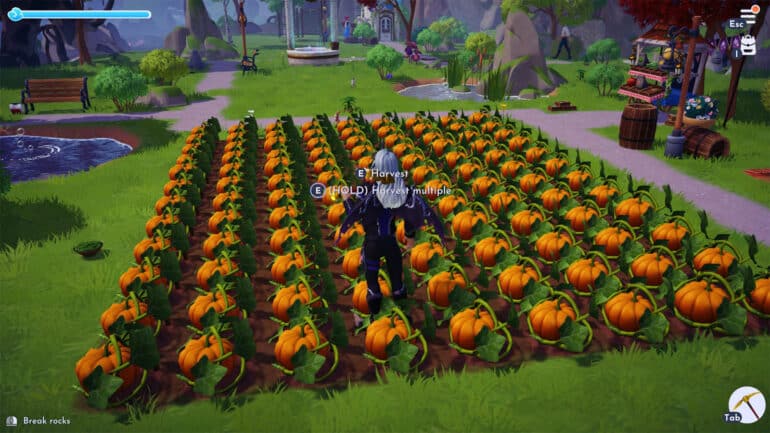 Star Coins are the main currency in Disney Dreamlight Valley and it is mainly used to purchase almost every item in the game. It can be earned by selling crops, fish, and other materials, or it can also be earned as quest rewards. Because of the many different cosmetic apparel and furniture that are in the game, players would want to maximize their earnings to be able to buy them all.

In his guide, we will be talking about one of the best ways of earning money or star coins in Disney Dreamlight Valley.

So far, planting Pumpkins is one of the best ways of earning money based on profit margin and the amount of effort spent in doing the activity. We’ll take a look at both the basic level and the advanced level of this method.

The basic pumpkin money farming method is simply the process that revolves around the planting, harvesting and selling of pumpkins. At just the standard planting and harvesting cycle, the profit margin comes up at 97.25 star coins per hour per plant, which can even be improved if the Pumpkin is planted in the Forgotten Lands (but seriously, who wants to stay in the Forgotten Lands for more than 5 minutes?).

When a gardener villager who is at maximum level is added into the equation, the yield becomes higher, so you can even expect higher earnings. Max level gardeners will usually raise the harvest yield by about 50-65% more.

The computation above does not include the super harvests that you may encounter once or twice in a 100-pumpkin harvest.

The advanced method will involve cooking the pumpkin into a dish called the Pumpkin Puffs, which require the following ingredients:

Each Pumpkin Puff can be sold to Goofy for 1,489 star coins, which is a far greater revenue than just selling pumpkins on their own. But, we also have to take a look at the additional expenses from the other ingredients plus the coal cost, assuming you buy your coal from Kristoff.

Of course, the cooking process of each Pumpkin Puff will take some time, but in total, cooking 100 puffs would just take roughly 6 minutes, which is way within the growing period of your next batch of harvest. So the earning rate would still be at around 271 star coins per hour per plant.

There is another tier of the Pumpkin Puff method that has been well explained in detail by Valley Spot in her video which involve putting more pumpkins in one Pumpkin Puff. The method has varying results that would either cater to both patient players and speedrunners.

Here are some additional tips which will help optimize your pumpkin farming and money making process.