A guide on how to defeat Margit the Fell Omen in Elden Ring. 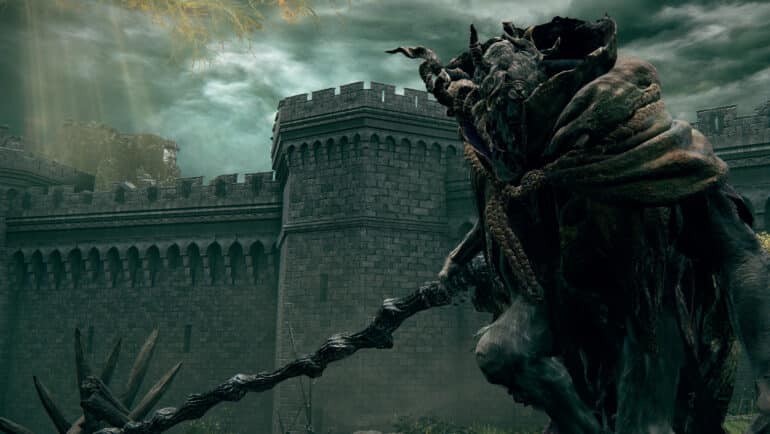 Margit the Fell Omen in Elden Ring is one of the greater foes or mini-bosses that players will have to face in the early parts of Elden Ring. He guards the path that goes further into the castle, and though he looks old and frail, he can still be agile and deal fatal blows to the unexperienced Tarnished.

In this guide, we will look into Margit’s attack patterns and talk about tips and strategies to make the fight more manageable.

Who is Margit the Fell Omen?

Margit the Fell Omen is the mini-boss that you have to defeat if you want to progress into the Stormveil Castle. He wields his wooden staff and can materialize other weapons made out of Holy light, like a sword, a dagger, and a hammer. Despite his build, Margit is agile enough to leap very high and pounce on his enemies.

Margit can also do a swing combo with his staff, his light weapon, and even his tail. He can pose quite a challenge to defeat, not only because of his relentless attacks, but also because the area that you are fighting him in has sheer cliffs on its sides where you can drop to your death.

The arena location to Margit the Fell Omen is the narrow path that connects the Stormveil Castle’s outer walls to the castle proper itself. It’s a relatively clear path with no obstacles to hide behind. The only dangerous parts of this arena are the cliffs on both sides of the path. Be aware of your positioning while dodging Margit’s attacks to avoid plummeting to your death.

Margit the Fell Omen’s fight happens in two phases, though there is not much of a visual difference that can be seen. He will start using his light hammer attacks more often once his health goes down to <60%. You can summon spirits during the fight and even Sorcerer Rogier who can be summoned just before entering the arena.

Margit will wind up his staff from over his left or right shoulder and swing it to the opposite side.

If you are confident with your parrying skills, you can equip your weapon with the parry skill and parry these swings. These attacks are the best to parry and to get an opening from to perform a critical riposte that deals a huge chunk of damage.

With Margit, he will usually swing his staff two or three times, and you will have to do two successful parries in succession in order to stagger him.

Margit will jump up high with both hands on the staff aiming downwards. He will then stab the staff to the ground as he lands.

This attack has an easy tell and can be avoided. He will lock on to your last position upon his jump. Simply dodge away from where you are once he is at the apex of his jump. This is a heavy attack so he will take time to recover, use this opportunity to deal damage.

Margit will hold his staff over his head with both hands before slamming it to the ground.

Margit will try to slam the staff on where you are while winding it up, so make sure to step farther away or move behind his back to avoid getting hit.

Margit can materialize three kings of weapons that he can use to do more attacks. These weapons don’t last long as they dissipate after 1-3 attacks.

Dodge as you do with his staff swings. Not recommended to block or parry as most of the shields that you get at this point of the game won’t be effective in preventing Holy-elemental damage. He can also chain these weapons into a long combo along with his staff, and he’s no just limited to using one type in quick succession.

There is not much difference between the two phases, except that he will use his light hammer more often.

How to beat Margit the Fell Omen Boss Fight

Here are additional tips on how you can beat Margit the Fell Omen in Elden Ring:

Check out this video by TomGP on how to defeat Margit the Fell Omen: