Elden Ring – How to Get Moonlight Greatsword: Dark Moon Greatsword

A guide on how to unlock Elden Ring's Moonlight Greatsword: the Dark Moon Greatsword. 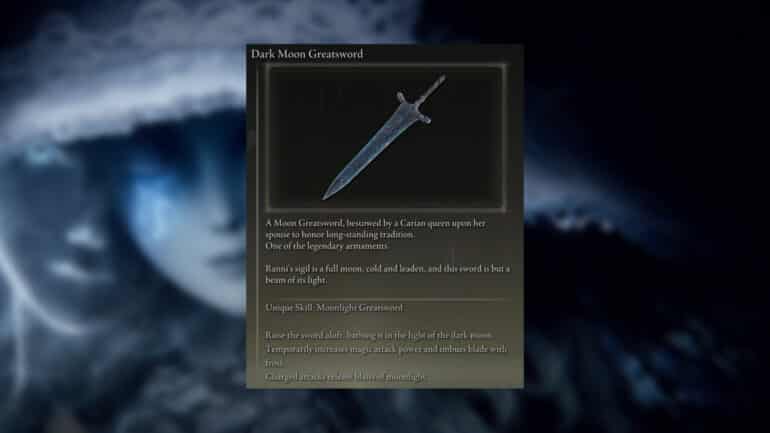 The Moonlight Greatsword has been an iconic weapon in most FromSoftware Games ever since it appeared in their 1994 game, King’s Field. An iteration of his weapon can once again be obtained in Elden Ring, which is now called as the Dark Moon Greatsword.

Getting the legendary greatsword is a feat itself as you have to go through a long questline and defeat several bosses along the way. All that effort will be worth it once you finally obtain the greatsword that not only cuts enemies, but it can also shoot out blasts of energy form its slashes.

In this guide, we will talk about the Dark Moon Greatsword and its abilities, as well as go through the steps on how to obtain it.

What is the Dark Moon Greatsword?

The Elden Ring Dark Moon Greatsword is one of the legendary armaments that can be obtained in the game. It scales well with the Intelligence stat which is a great weapon for those who run a spellblade build or just a hybrid build between physical and magic attacks.

Its Unique Skill is called Moonlight Greatsword. Once the skill is used, the entire bladde will glow bright and the player will temporarily gain an increased magic attack power. The greatsword will also be imbued with frost which ends up inflicting frostbite on to enemies. Frostbitten enemies will take increased damage from all sources.

Another thing that that player can do while the Moonlight Greatsword skill is active is to send out blasts of moonlight from its charged attacks, giving the attacks some range.

How to Get the Dark Moon Greatsword

Getting the Dark Moon Greatsword is a long journey, and it starts by talking to Ranni the Witch. Your first interaction with Ranni is when you first get your Spirit Summoning Bell from Renna, who is actually Ranni’s alter identity. From here on, you will have to progress through the game and meet up with Ranni again a couple of times. Follow the steps below to get the Elden Ring Dark Moon Greatsword:

Meet Ranni the Witch for the first time

As mentioned above, you will have to meet Renna first. Visit the Church of Elleh at night time to meet Renna who will eventually give you the Spirit Summoning Bell.

Progressing through the story of the game and defeating Rennala is required to get access to the next section which is the Caria Manor.

Defeating Royal Knight Loretta will allow you to access the three towers near the manor: Renna’s Rise, Ranni’s Rise, and Seluvis’s Rise.

Talk to Ranni at Ranni’s Rise

Accept Ranni’s invitation to join her cause to find the hidden treasure of Nokron. The following quests will require you to go through Blaidd’s quest line, which will eventually lead you to the underground city of Nokron.

Meet Blaidd at the Siofra River

Following Blaidd’s quest line, you will encounter him multiple times leading to the encounter at the Siofra River. Blaidd will then tell you to meet Seluvis at Seluvis’s Rise to gather more information on how to get to Nokron.

Seluvis will lead you to talk to Sorceress Sellen who is located at the Waypoint Ruins Cellar. Sellen will then tell you that the way to Nokron is currently inaccessible and one way to open up a path to the underground city is by defeating Starscourge Radahn. Talk to Blaidd once more and he will request for you to join him in a tournament to defeat Radahn.

Go to the Redmane Castle and Defeat Starscourge Radahn

Enter the tournament to face off with Starscourge Radahn. You have the option to face him alone or you can also summon your allies, including Blaidd, to help you defeat him. Once defeated, a meteor will crash somewhere in the area. We have a guide on How to Defeat Starscourge Radahn if you find him a bit too challenging.

Go to Fort Haight West and descend down the hole

At this point, the fallen meteorite has opened up a hole that leads to Nokron. Make your way through Nokron until you arrive at the Night’s Sacred Ground.

Go through Night’s Sacred Ground until you reach the very end where you will see a chest containing the Fingerslayer Blade, which is the hidden treasure that Ranni is looking for. You will then have to bring this blade back to Ranni at Ranni’s Rise. She will then reward you with the Carian Inverted Statue which will be a key item for the next part.

Reach the Divine Tower of Liurnia

Go to the Carian Study Hall and use the Carian Inverted Statue. This will then invert the entire hall which grants access to the Divine Tower of Liurnia. At the very top of the tower, you will then discover that Ranni’s body has the Cursemark of Death on it.

Ainsel River Main is another underground location that can be only accessed by using this specific Sending Gate. Upon arriving, you will see an item on the ground which is actually a Ranni Doll.

Talk to the Ranni Doll

To talk to the Ranni Doll, head to a nearby Site of Grace and you will see an additional option to talk to the doll. Do this around 4 times and the doll will then talk back, revealing itself as Ranni’s soul within the doll. She will then give you a task to defeat the Baleful Shadow.

Defeat the Baleful Shadow at the Nokstella Waterfall Basin

From the Nokstella Waterfall Basin, head towards the Lake of Rot. along the way, you will meet the Baleful Shadow which is actually an enraged Blaidd. Once defeated, talk once more to Ranni and she will reward you with the Discarded Palace Key.

Revisit the room where you fought Rennala to find a chest. Use the Discarded Palace Key on the chest to acquire the Dark Moon Ring.

Go to the Lake of Rot, then to the Grand Cloister

Following the river of rot in the Grand Cloister, you will find an open coffin near the edge of a cliff. Resting in the coffin will transport you to another location where you will meet another boss.

Defeat Astel, Naturalborn of the Void

Once you have defeated Astel, you can then proceed to the other part of the area where an elevator will bring you up to the Moonlight Altar.

Go to the Cathedral of Manus Celes

Upon reaching Moonlight Alter, you can finish the fight against Glintstone Dragon Adula, or just go past it and head towards the Cathedral of Manus Celes. Near the Site of Grace to the right is a very deep hole that you can descend into. You can use your lantern to get a better view on the ledges that you can land on to to prevent a fatal fall. At the very bottom, follow the path until you arrive at a room that has the Two Fingers with Ranni’s body below them.

Use the Dark Moon Ring on Ranni’s body

Using the ring will then finally free Ranni. She will then reward you with the Dark Moon Greatsword before disappearing.

How to Get the Age of Stars Ending for Elden Ring?

Completing Ranni’s entire quest line and getting the Dark Moon Greatsword will unlock the option to go for the Age of Stars ending of the game.

Check out this video by FightinCowboy which walks through the entire quest line to obtain the Dark Moon Greatsword: