Elden Ring Invasions and How to Get the Bloody Finger

A guide on Elden Ring invasions. 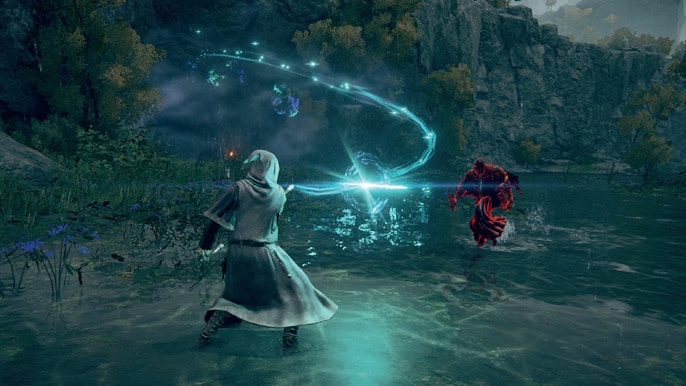 Invasions in Elden Ring are one of two ways in which players can play competitively against other players in the game. Players can invade other player’s co-op session with the objective of defeating the host of the session. Fans of the previous Souls games may already be familiar with the invasion system, but there have been some changes done on how invasions work in Elden Ring.

In this guide, we will talk about how the invasion system works and how you can get the Bloody Finger, the item necessary to invade other players’ worlds.

How to Invade in Elden Ring

To invade other players in Elden Ring, you will have to use either a Festering Bloody Finger or a Bloody Finger to start an invasion in their world. Upon using one, you will be teleported to an eligible session on the same spot where you used a finger in your world.

Your main objective as an invader is to kill the host player of the world and they’re tagged as the Host of Fingers. Upon successfully killing the host, it will count as your victory, regardless if their allies are still alive.

The allies, also known as the Furled Fingers, are other players that joined the world to defend the host. It is not necessary to kill the allies to win the invasion, but it can help make the invasion easier to win.

On the other hand, an invasion can be considered as a failure if the invader dies, or if the host enters the boss arena, which is the host’s objective.

After a successful invasion, the invader will be rewarded with the following:

As mentioned, hosts are known as Host of Fingers while allies are known as Furled Fingers. Invaders may also encounter a different kind of player which are known as Hunters whose main objective is to kill invaders.

Invaders are further classified into two, namely a Bloody Finger and a Recusant. Both share the same objectives and the only difference is the narrative of the purpose of their invasion.

Since there can only be four players in a session at a time, an invader can expect to encounter any of these combination of roles in a session:

The fourth combination can only be encountered if the Host decides to use the Taunter’s Tongue to purposely allow another invader to invade the session. We have an Elden Ring Multiplayer Guide that talks more about the topic of multiplayer roles.

One of the restrictions when invading is that you can only invade worlds where the host has already summoned at least a single ally. This means, you won’t be able to invade a host who is alone. The game automatically imposes this restriction and you don’t have to do anything else as you will just be transported to an invasion-eligible world.

Another restriction during invasions is that you cannot ride a mount while invading. This is done for balancing purposes as the host and their allies will also be restricted from riding mounts.

How to Exit an Invasion in Elden Ring

Using a Finger Severer will allow anyone summoned within the world to be sent back to their own world, be it an ally or an invader. As a host, this is similar to “kicking” a player from your session. As a summoned player, using it will allow you to leave the world without having to die or disconnect from the game.

Elden Ring: How to Get the Bloody Finger

Speak to White-Faced Varre and Return to the Roundtable Hold

White-Faced Varre can be found at the starting area. Varre will then tell you to revisit the Roundtable Hold and go inside the Two Fingers’ chamber. In the chamber, talk to Finger Reader Enia to progress the story forward.

Head to the Fallen Ruins of the Lake Site of Grace and head west to reach the Rose Church. Varre will give you a quest to invade 5 players’ worlds. You will then be given 5 Festering Bloody Fingers to use for the invasion.

You can use the Festering Bloody Fingers anywhere on the map to start an invasion. Regardless if you win or lose an invasion, invading five times will allow you to progress through the quest.

Return to White-Faced Varre at the Rose Church

Varre will then give you the Lord of Blood’s Favor and will require you to kill a maiden.

Visit The Four Belfries and Activate the Portal

Go to The Four Belfries at the northwest side of Liurnia. Head to the highest belfry first to get an Imbued Sword key inside a chest. You then need to go to the second highest belfry which is east of where you are at. Use the sword key at the statue to activate the portal to the Chapel of Anticipation.

You will once again have to have to fight Grafted Scion which was the tutorial boss from the beginning of the game.

Visit the Chapel and Find the Dead Maiden

Once defeated, make your way into the chapel where you will see the dead maiden. Interacting with the maiden will dye the Lord of Blood’s Favor with her blood.

Return to White-Faced Varre at the Rose Church

Showing the bloodied cloth to Varre will complete the quest and you will receive the Bloody Finger which has unlimited uses for you to invade other players.

Check out this video by Havok on how to get the Bloody Finger: