Ghostwire Tokyo – Landmark Locations and Where to Find Them

A complete guide on all Ghostwire Tokyo landmark locations and where to find them. 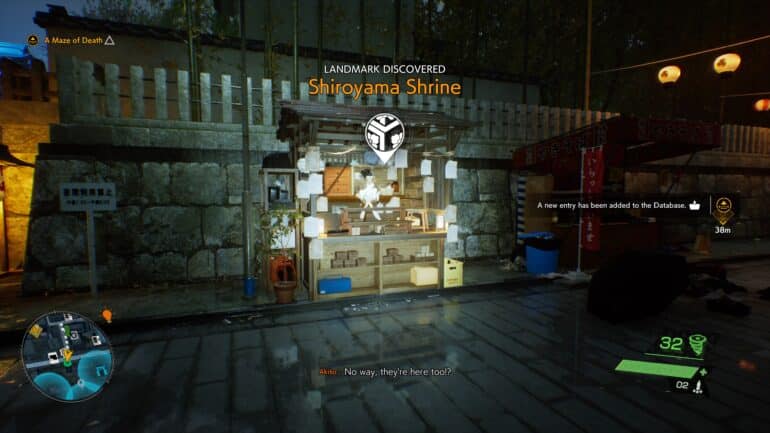 Landmarks in Ghostwire Tokyo are unique locations in Shibuya. There are 31 unique Ghostwire Tokyo landmark locations on the map, some are easy to spot while others are completely missable. The Ginpei Restricted Area is one such location as it requires the player to enter the fog for a brief moment until it registers as a location.

The thing about some of these landmarks is that the marker doesn’t register on the exact spot on the map. It is usually the area around the marker that registers for the location. Regardless, you can acquire most of the locations naturally by going walking around and you will unlock the “Shibuya Is My Back Yard” trophy and achievement. In case you’ve missed a few Ghostwire landmark locations, let this guide help you out.

The massive scramble crossing spanning the four-way intersection outside Shibuya Station is one of Japan’s most recognizable landmarks.

This area was in the process of being redeveloped, but work was stopped halfway through, and now it remains an open plot of land overrun with weeds.

This water tower is the primary water source of the area’s residents. Constructed during the middle of the Showa period, the aging concrete buildings of the area’s public housing block still draw water from this tower.

The line of torii gates on the road approaching this shrine leaves a striking impression. The fox statues at the entrance represent the servants of the god residing here.

This shopping district has the colorful atmosphere of a traditional working-class neighborhood. The narrow road is lined on both sides with closely-packed small independent shops.

Judging by exotic shops and restaurants lining this gentle slope, one would be forgiven for thinking they weren’t even in Japan.

This redevelopment area is a symbol of Shibuya’s budding rebirth. Various plans are being put into practice simultaneously in order to improve transportation, sightseeing facilities, and more.

A garden on the roof of a high-rise building. Features an outdoor observation deck offering a gorgeous bird’s-eye view of Shibuya. This place has gotten a lot of attention as a symbol of the ‘new Shibuya’.

With Shibuya’s rush to redevelop the area, it’s no surprise that construction sites are everywhere. Half-completed roads will often lead to dead ends, and anyone wandering into an area under construction is likely to feel like they’ve gotten lost in a maze.

A shopping center featuring many fashion stores aimed primarily at young women. The building’s distinctive appearance makes it one of the most famous buildings in Shibuya.

In the past, this was the heart of Shibuya, once featuring the largest department store in Tokyo filled with famous brands.

This area features a stark contrast between modern office buildings and worn-down old pubs. The variety of pubs is what makes the place really special, though. From traditional establishments serving old standbys like oden and yakitori to high-class wine bars, there’s something for everyone here.

A major railway terminal that links many of Tokyo’s transit lines. It is among the most widely-used stations in all of Japan, and is often found with large crowds milling through at all hours of the day.

In Tokyo, space is at a premium, and buildings are crammed together as closely as possible as far as the eye can see. There are some parts of the city that are considered off-limits, however, feared and respected by local residents for a number of reasons.

A weathered old traditional Shinto shrine. It is believed to have been constructed sometime between the fourth and seventh centuries. A sumo tournament is held every summer upon its grounds, which attracts many spectators.

In the late Edo period, during the 18th century, this Buddhist temple housed what was known as a ‘terakoya’, a type of temple-run school dedicated to educating the children of the nearby townspeople. Perhaps because of that background, the temple today continues to be known for hosting regular events geared toward children.

A pond rumored to host kappa. Local legends tell of unlucky horses that passed by the water’s edge only to be dragged inside by its kappa occupants.

A charming shopping center featuring old institutions alongside newer outlets. It’s something of a hub for creative boutiques that walk the cutting edge of global trends, such as suitcases designed in collaboration with famous brands and other assorted goods.

A street crossing with more than its share of rumors of strange and unusual phenomena floating about. One story surrounding the area, for instance, tells of the ghost of a child who died in an accident at the crossing and now seeks friends to play with.

A small neighborhood police station that serves as something of a landmark due to the building’s distinct shape. Prominent even from afar, it’s often used as an easy-to-find meetup location.

A major street lined with hip shops targeting a youthful clientele. It’s a popular tourist location in Shibuya, and stands at the vanguard of all the latest and greatest trends.

A graveyard whose tombstones are accentuated by street lamps, which lends the place an air of mystique. Rezoning and development have seen the cemetery surrounded by buildings, making it more and more maze-like over time.

A large, iconic street extending from Shibuya’s towering 429 building. The hippest stores and cafes line the pavement, making it a major hub for emerging trends.

A hotel hub in Enancho, the preeminent entertainment district in Shibuya. Lined with rows of flashy buildings bedecked I neon lights. The area’s low-cost, no-frills hotels are frequented by workers who have missed the last train.

A five-way crossing whose connecting streets stretch from the center of Yugenzaka out into the surrounding areas. It serves as a gateway from the entertainment district to the outskirts of Shibuya.

A large, verdant park that serves as a rest area for residents. It’s also a famous hot spot for neighborhood cats, owing to all the people who feed them there.

A tower that supplies electrical power to the surrounding area. A vital lifeline for urban living, an array of security cameras and other protective measures keep it tightly guarded.

A high-rise office building whose construction was completed in 1975. Until the Kagerie building was erected in 2012, it was the tallest structure in the area.

Local legends state that a major plague broke out in this area, which resulted in it being abandoned, as residents feared residing within would incur divine wrath. Nonetheless, something seems to lurk within its thick forest, which remains coll all year round.

A park which was purchased and scheduled for demolition, though these plans were scrapped for reasons unknown and the place was abandoned. Rumor has it that the plans were put on ice after a series of accidents befell work crews and site managers.

There is only a trophy as a reward for finding all the Ghostwire Tokyo landmark locations. You get to unlock the ‘Shibuya Is My Back Yard’ trophy and achievement attached to it and a requirement for getting the platinum trophy.

And that’s about it for all the Ghostwire Tokyo landmark locations. I hope this guide helped you out in some way. Have a nice trip while touring around Shibuya.