Elden Ring – How to Beat Rennala, Queen of the Full Moon Boss Fight

A guide on how to defeat Rennala, Queen of the Full Moon in Elden Ring. 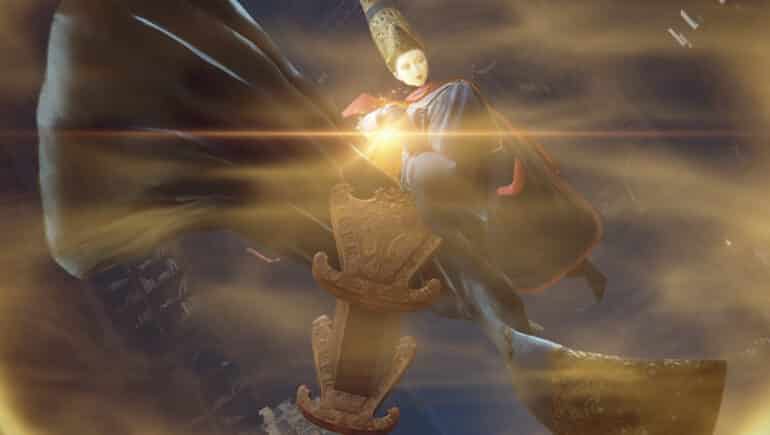 Rennala, Queen of the Full Moon is one of the main bosses or demigods in Elden Ring. She is a wielder of magic and uses the power of frost and the moon to defeat her challengers.

In this guide, we’ll take a look into Rennala’s attacks and how to prepare for and avoid them, as well as some tips and tricks to easily win over this fight.

Who is Rennala, Queen of the Full Moon?

Rennala is the head of the Academy of Raya Lucaria which houses students who want to master sorcery. She mostly uses spells that deal magic-elemental damage, while her students can use fire and physical damage.

Because of her exclusive mastery of sorcery, magic attacks against her are ineffective. On the other had, she is very weak against any physical attacks.

The first phase of Rennala’s fight happens in a library with a circular layout. She will be floating in the middle of the room surrounded by her students or her “children”. Around this room are bookcases that can serve as cover to block her projectiles. There is enough space in the room to weave through her children as long as you are aware of the room’s layout.

The second phase of the fight happens in an open area that seemingly stretch to infinity. There are no obstacles in this area, and therefore nothing that you can use as cover.

Rennala uses ranged attacks in both phases of the fights. Her children can also attack using fire spells and books as projectiles, but they are only present in the first phase. On the second phase, Rennala can summon several kinds of spirits that can aid her in the fight.

Rennala will be invulnerable at this point, shielded by a magic barrier and is floating high enough that no melee weapon can hit her. In this first phase, you have to find her children that are casting the barrier and kill them in order to make Rennala vulnerable.

These children are the ones with the golden aura surrounding them and there are usually three of them casting the spell. Some of them can be hiding behind the bookcases, so make sure to check take a peek in those corners, too. These children aren’t tough and can be killed with a single hit.

Once all of them are killed, Rennala will lose her barrier and fall to the ground, briefly becoming vulnerable for a few seconds.

While shielded, Rennala will turn some of her children into tombstones that float in the air. After a few seconds, they will rain down on the player. Getting hit by all of them can be fatal.

Once they are being summoned she will be repeating a dialogue regarding her children being “born anew”, signaling that she’s preparing for this attack. Position yourself behind the bookcases so that you can use them to block the tombstones.

Rennala’s children can also attack by shooting flames or by throwing books at the player.

The good thing is that they don’t attack as much, and when they do hit, they do not hurt that bad. Still, it’s best to be wary of these attacks as getting hit with enough of them can still be fatal.

This attack happens when Rennala is about to recover from having fallen over. She will glow before blasting an explosion of light which deals a significant amount of damage. She will then recover her barrier afterwards.

Once she has fallen down, you have a coupled of seconds to do damage against her. As a melee attacker, just make sure to move away as soon as you see her glowing to avoid getting caught in the blast.

Once you you take all of Rennala’s health on the first phase, you will then be teleported into the open area for the second phase. During these phase, she will use her ranged spells and summon different kinds of monsters.

Rennala will start sucking energy from her staff similar to a black hole, then fires a beam of energy straight out.

Rennala will stay stationary as soon as she shoots out the beam, so it’s best to dodge towards her right or her left to avoid getting hit. This is an attack that leaves her open for a good amount of time, so make sure to take advantage of it and position yourself behind her to land some easy hits.

Rennala will charge her staff and then shoots out a fast energy beam that homes in on your position.

This attack often happens when you’re too far away from Rennala, so don’t stray too far to prevent this attack from being casted often.

Rennala will float and curl up as she conjures a small moon. This moon will then fly towards the player slowly before exploding and dealing huge amounts of damage.

Since this moon is a slow mover, you can easily dodge it and shift your attention to any incoming or follow-up attacks.

Rennala will conjure a number of wisps which will freely float around for a few seconds before homing in towards the player.

The wisps fly relatively faster than the moon that she conjures, but they have a tighter turn angle. These can easily be dodged or even outrun, provided that you have enough distance from them.

Rennala will conjure a number of icicles in front of her before sending them towards the player in quick succession.

These icicles will lock on to your last location just as they are about to fire off, so as long as you’re constantly moving towards the left or right, you will be safe from getting hit by them.

Rennala will conjure an icicle cluster before it explodes in a cone formation in front of her.

It can get quite tricky to dodge this spreadshot attack because the icicles fly very fast, but try to time your dodge towards her as they fly, or better yet, try to move towards her side and outside the cone as the cluster is being conjured.

Rennala will throw her staff in two ways. The first one is a throw that goes straight out. The staff will be spinning as it flies out and as it returns to her, both motions can deal damage. The second one is she throws the staff towards the side like a boomerang. The staff will have a wide circular flight path around her.

The staff does not spin very fast, so she can actually miss hitting you even if the staff is thrown directly straight at you if staff flies by at a certain orientation. Nevertheless, do not get too greedy with the openings as this attack has a very short tell which can be hard to react on.

Spirit Ashes are one of the most dangerous attacks that Rennala can dish out simply because they can overwhelm you and it is significantly harder to deal with several sources of damage at once. She will start summoning them once her health is at 50%.

Rennala will thrust her staff towards the ground which will do a shockwave that deals damage and can knock you back. She can then summon several kinds of spirits and the lower her health gets, the more often she will summon them:

How to beat Rennala, Queen of the Full Moon Boss Fight

Here are additional tips on how you can beat Rennala, Queen of the Full Moon in Elden Ring:

Upon defeating Rennala, you will be rewarded with the following:

Check out this video by Obsoleek that showcases the Rennala fight: