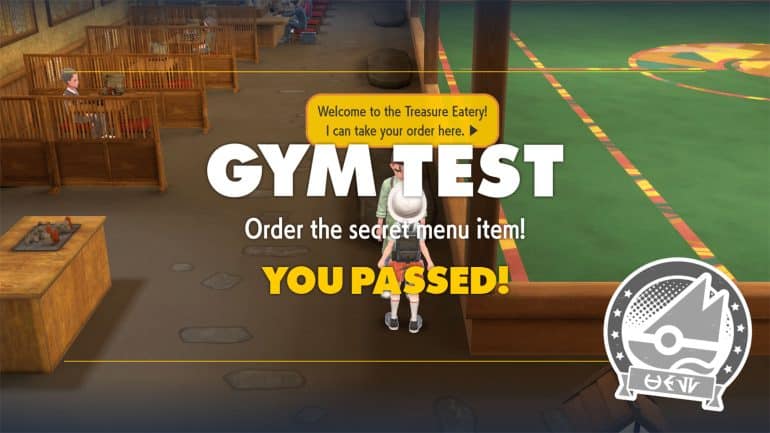 Before fighting each of the town’s Gym leaders in Paldea, players must first pass a preliminary Gym Test and they differ in every town. One of the trickiest test is from the Medali Gym, a gym that specializes in Normal types, because it requires players to figure out a secret menu item just based on a couple of clues.

In this guide, we will go through the steps on how to solve the Medali Gym Test Dish Puzzle.

How to solve the Medali Gym Test Dish Puzzle

After talking to the gym attendant at the Medali Gym, you’ll be entered into the Gym Test. You’ll have to figure out a particular dish to pass the test and the way to know how to order it is by getting clues from the other test takers. You will also be given a clue for the dish.

Your first clue is to find out how the regulars season their dishes. You can keep this clue in mind for now while you get the other clues.

As you head out of the gym, go talk to the student near the amphitheater to challenge them for a fight. After succeeding the fight, you’ll then be given another clue which is to look for a dark spot surrounded by stairs.

You don’t have to look far as you just have to head down the amphitheater and interact with the gate by the dark passageway where you’ll get the clue “Fire Blast“. Take note of this for later.

Next, head down the food street and you’ll find another student. Win the fight to get another clue that says to listen really closely to the blue bird Pokémon.

Just further down the road is a flying taxi pilot with a Squawkabilly on top of their head. You’ll have to talk to the Pokémon and wait for it to say a few of its lines until it says medium. Take note of this clue for later.

Go around the street until you find another young student. Win the fight to get the clue that says to look for something that’s the odd one out at one of the ice cream stands.

Further down, you’ll see three food stands by a corner. Check the one with the blue, white, and pink awning and then scroll down to the flavor options below to see the Grilled Rice Balls. You don’t have to buy it, just take note of this clue.

Now it’s time to head over to the Treasure Eatery northeast of the town.

Before talking to the staff inside to give your order, go to the back of the eatery and talk to the salary man. He will give you the final clue which is the answer to how the regulars season their dishes: lemons.

Go back to the order taker and choose these options in this order:

The order taker will then call out your order to the chef at the back, signaling that you have passed the test. You can then proceed with the Gym battle against none other than the same salaryman you talked to, Larry, Medali town’s Gym leader.