V3 and Aguilera are coming out with new SH Figuarts models 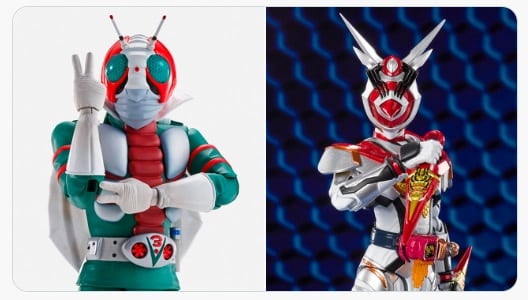 Kamen Rider has once more surprised its fans with news from Tamashii Nations. In a new stream premiered on the BANDAI Spirits Youtube Channel, the new Kamen Rider SH Figuarts was recently announced for the coming year.

The latest Kamen Rider that will be joining Revice series of the SH Figuarts lineup will be Kamen Rider Aguilera Queen Bee Genome. This new rider figurine will come with her accessories and more. Not only that, but it will also come with the Kamakiri Vistamp which can be used by Kamen Rider Revice. Pre-orders for her figurine are now available online.

Who is Kamen Rider Aguilera?

She is one of the female riders in the latest Kamen Rider series, Revice. Using the Weekend Driver and the Queen Bee Vistamp, Hana Natsuki joins hands with her friend, Sakura, and seeks redemption as she was manipulated by the demonic lord, Gifu. Armed with Kunais, she can easily take down foes like a ninja.

Also announced in the live stream is a familiar Showa Era rider who will be joining his fellow riders in the Shinkocchou Seihou series Kamen Rider V3, the 3rd Kamen Rider of the Kamen Rider franchise. He alongside Ichigo and Nigou will be together once and are now available for pre-order online.

Who is Kamen Rider V3?