It's time for the USJ collab once more! 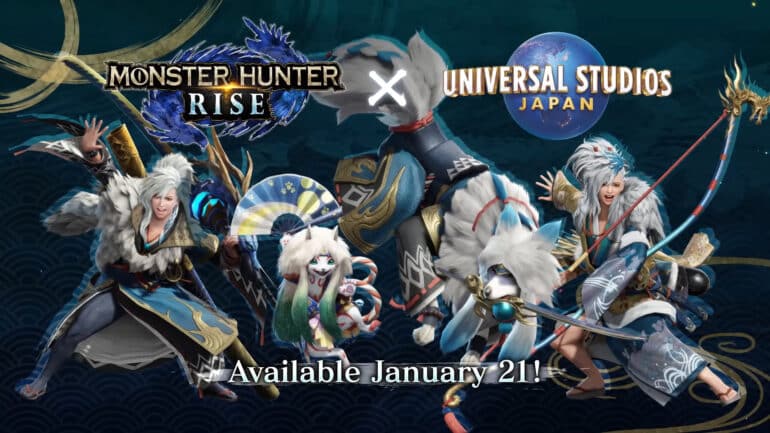 Monster Hunter will once again be collaborating with Universal Studios Japan (USJ) as a part of a series tradition of giving more cool stuff to hunters. There will be a bunch of new quests, weapons, armors for you and your buddy to collect.

The Monster Hunter Rise x USJ collaboration event will be happening on:

How to Unlock the USJ Armor Sets and Weapons?

Similar to past USJ collabs, hunters will have to get particular crafting items that can only be received as rewards from the USJ special events. We’ll be coming up with a guide on how to complete the quests and craft the armors and weapons as soon as the quests come up.

In this quest, hunters will have to face against multiple angry Arzuros plus an Apex Arzuros inside the arena. This quest will reward you with materials that you can use to forge the weapons, armor, and layered armor for your buddies.

This quest requires the hunters to slay an Almudron, a Tetranadon, and a Magnamalo in the Shrine Ruins. This quest will reward you with materials that you can use to forge the weapons, armor, and layered armor for your hunter.

The Azure Age Set can serve as both a fully functional set with its own skills and as a layered armor.

The Azure Star Blade is a long sword that has an ornate design. The tier suggests that it can be upgraded, similar to previous USJ weapons.

The Azure Era Wyrmbow is a bow with a quiver that has a very traditional design. The tier also suggests that it can be upgraded.

This set is specific for your Palamute buddy.

This set is specific for your Palico buddy.

Meow Limit is a downloadable Palico that you can recruit and turn into your buddy or one of your meowcenaries.

Just make sure to check for an update for the game and visit Senri the Mailman in the village center to get the needed quests on the day they go up.

If you liked this article, check out our other Monster Hunter Rise articles:

This event will only be available on the Switch version on January 21, 2022. The event is expected to go up on the PC version in late February. If you want to join the hunt through your PC, Monster Hunter Rise is now available through Steam.