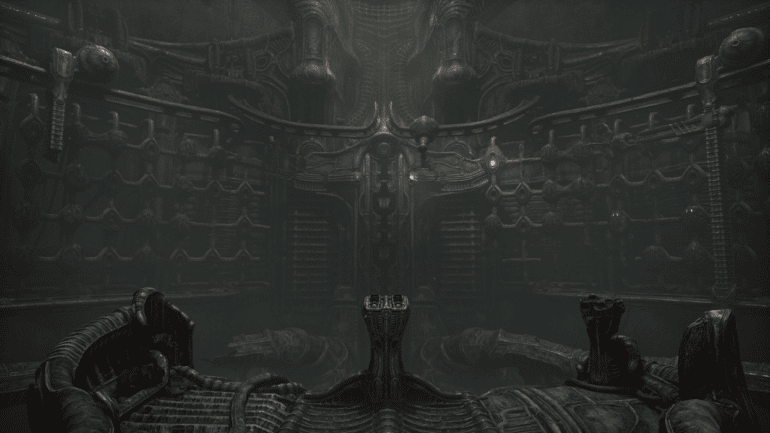 How to Solve the Scorn Claw Puzzle?

To solve the claw puzzle you need to place the petrified eggs in the correct position in Scorn. The upper left of the puzzle’s grid is where a particular egg should be placed. You need to use the claw machine to the right of the main platform to clear a path and move the other eggs out of the way so you can make way.

If you’re having trouble finding the claw puzzle above, you can find it on the upper floor shortly after you receive an bonelike key implant to your arm that lets you operate machines. You’ll run past a door and into a large cavern with a platform sitting in the center. Go into the entrance to your right and you’ll head into a room with a strange scoop machine. Take the elevator to reach the second floor.

Step 1: Slide the Eggs to the Right Place

Once you reach the upper level, this is where you’ll be solving the Scorn claw puzzle. In the center of the room, you’ll see strange eggs hanging across. This is where you’ll have to operate the machine in order to get a specific egg into the top left position of the puzzle grid. The puzzle can be pretty challenging as other eggs block the way. Simply slide the other eggs that are blocking the way and slide that specific egg into place.

Refer to the picture above for what the egg you’re looking for should look like and where you need to place it. This petrified egg has a different style than the others and feels more “ripe” with glowing eyes on top of it. Once it’s in place on the top left, operate the machine in the center and it’ll pop the egg.

There’s actually two eggs that will garner an interaction with the claw machine. The first one is a single egg with glowing eyes above which will smash into pieces once the claw tries to put it in the center. The second egg has a petrified egg attached at the bottom of it which makes it difficult to slide along the grid but is the one you’re looking for.

Step 2: Put the Egg into the Stroller

Go back down the elevator and head to directly below where the egg is. There is a contraption you have to operate that will put the egg into the stroller. Once you’ve done so, climb above the center platform and arrange the rails to where you want the baby to go.

You’ll have to get a familiar layout of the room before arranging the rails since they lead into two different rooms. You’re free to choose which one you want the egg to go in. But you’ll have to activate another contraption first before entering one of the rooms which you’ll encounter along the way.

You have two choices here: the scoop or the saw. Either one will progress the puzzle and allow you to get past the door. Once you’ve made your resolve, push the stroller into one of the rooms and then activate the contraption in that room.

It really doesn’t matter what you pick as you’ll be able to get what you need to open the door in the center. But you’ll have to use the machine that plants a bonelike key device into the arm which can be found near the room with the saw left side of the big door.

If you pick the scoop option, the machine picks up the egg and destroys the humanoid crammed inside. This will get you its arm where you can go to the machine that puts a key into it so you can use it to open the big door.

Picking the saw option will free the humanoid from the egg. It will then follow you around in which you’ll have to lead it to the machine that puts a key into its arm so you can open the big door.

Unfortunately the sadistic part is that both options are cruel. The door has two consoles in which two humanoid aliens with keys are needed to open it. Even if you pick the saw, you’ll have to leave behind the humanoid who followed you who is still trapped in the console presumably in pain.

That’s how you solve the Scorn Claw Puzzle. We hope this solution provided a lot of insight for you to progress your journey in the game. For more on Scorn, you’re already in the right place.

Check out this Youtube video from MKIceAndFire who plays through the exact same Scorn claw puzzle above.