The creatures of Scorn are a mystery all their own 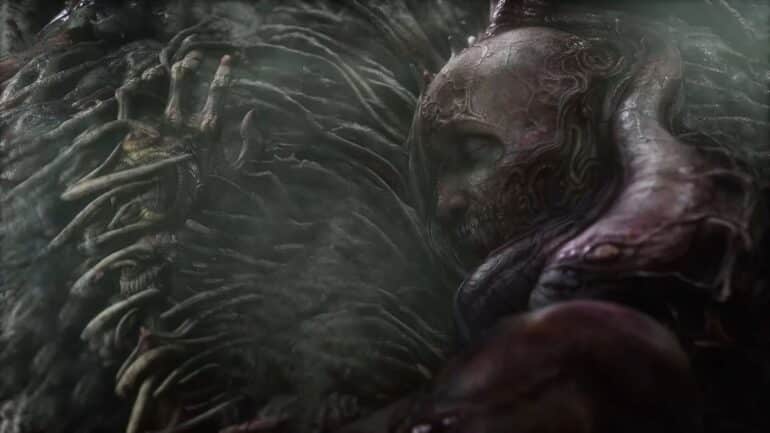 There are a fair number of Scorn creatures that you will find throughout your journey through the ruins of a dying world. Each of the creatures in the game has its own tendencies and behavioral patterns in the presence of the player. The creatures also react to the actions the player does to change the environment they live in.

In this guide, we’ll list all the Scorn creatures the player will encounter in the game. Many of these creatures are quite hostile to the player, with the exception of a few notable exceptions.

The Drone is one of the first Scorn creatures the player will encounter in the game. The balloon-like creatures possess glowing bubbles as the majority of their bodies. They produce and shoot a mist that hurt the player should they get close to it.

You use the piston weapon to destroy them and be able to pass through the egg chamber.

Most enemies the player encounter in the game consists of creatures called Workers. They are four-legged, ant-like creatures that roam around the ruins of the Scorn world. From what we’ve come to know, they are responsible for spreading the organic matter we see everywhere in the world.

When they are aware of the player and their location, they tend to either charge them or fire a chunk of biomass from the cavity in their chests. At closer ranges, they will either bite or grapple the player.

It takes two shots to the head with the one-handed shotgun weapon to effectively take it down once and for all. Otherwise, it will take more or less 5 or so hits with the Piston weapon.

These small creatures are affectionately called ‘Chicken’ by the Scorn community. These creatures are usually attached to the rears of workers before detaching themselves to attack the player.

Usually weak, they fire a projectile similar to the weapon the player carries around with them.

A larger version of the Worker, these tanky beasts tend to charge the player and knock them down instantly. And that happens to be their only distinguishable trait. It takes two shots from the riot shotgun to take them down. The other weapons are somewhat ineffective.

Dubbed the ‘Crater Queen’ over at the Scorn wiki, this massive creature holds an important item that the player needs. It is a mostly dormant creature compared to the others which are hostile to the player. (And we have sneaking suspicion that they may want to assimilate you for biomass)

Unfortunately, in order to progress the story, you will have to kill this creature by slicing it up from three different areas.

There’s no other way of describing this creature other than calling it an Alien Fetus. The player needs this creature’s blood in order to activate the robots that are important later on in the story.

Out of all the Scorn creatures, this one does not initially become hostile to the player. It is only after being inserted inside the mech does it become aware of its surrounding and instantly panics.

This Mech activates the moment an Alien Fetus is inserted into its stomach cavity. It sees the player as a threat to the fetus and will do all that it can to protect its precious cargo.

Technically the one true boss fight in the game, this fight is made harder by the fact that Scorn’s controls aren’t the most responsive.

Probably the most important of all the Scorn creatures, the Parasite is what’s left of the humanoid we first played during the prologue.

The Parasite now is a stalking lizard creature that attaches itself to the humanoid that’s trying to escape this world. It is both a blessing and a curse. But mostly a curse.

And that’s it for our list of all the Scorn creatures. The more we look into it, the more tragic they become in our eyes.

Check out this video from Youtuber Hopezera Gaming where he showcases all monsters in the game, as well as the finishing moves and bosses.