Mixing Slimes to Make A Largo 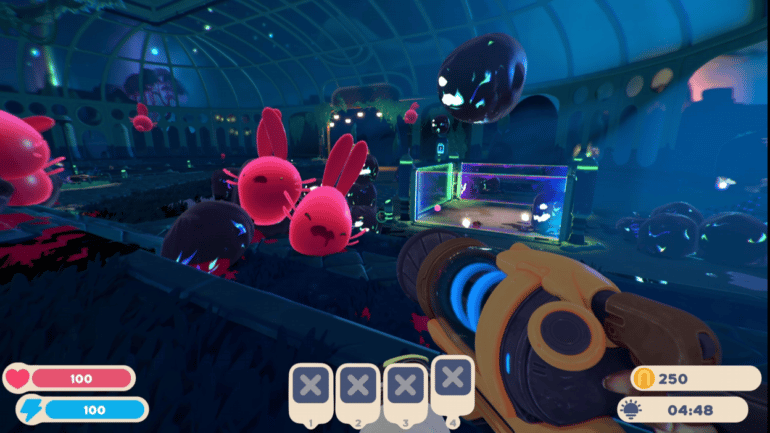 Slime Rancher 2 Largo Slimes are a unique type of slime that are far bigger than pure slimes and can be utilized to create one-of-a-kind plorts and quickly earn Newbucks for purchasing equipment upgrades.

The ability to merge different slimes into a single, massive Slime is one of the key features carried over from the original game. The reason for this is so that players can make more efficient use of the limited space available to them in the Conservatory. In this guide, we will give players all the info they want to know about Largo Slimes and What combinations can be made.

What are Largo Slimes in Slime Rancher 2?

Largo Slimes as stated are slimes that are far bigger than pure slimes and can no longer be stored in the vacpack in this state. This large adopts the favored food, traits, and abilities of the Slime it was before transforming and the Slime type of the Plort that it ate as a pure Slime. When fed, they produce two Plorts; one for each of its base Slime types.

The only danger of Largo slimes is that if a Largo eats another Plort of a type that it does not produce, it transforms into a Tarr, a hostile Slime that devours other Slimes and produces more Tarr when it does so. This is often referred to as a Tarr outbreak.

There are different combinations that can be made in Slime Rancher 2. The combinations are limitless but what we have here below are some of the best LARGO combinations we can find in the game:

You may make this fantastic largo at the start of the game by combining Cotton Slime and Pink Slime. Both of these plorts may not be the most lucrative in terms of earning Newbucks, but they are necessary for using the Fabricator to improve existing equipment or for constructing whole new pieces of gear. Both Slimes can be found in Rainbow Fields.

Even though Batty Slimes and Phosphor Slimes need a corral with light filters, you may still keep them together as a Largo. Fruit is abundant across the maps, so it’s simple to feed them and get plenty of essential crafting plorts despite the fact that this combination won’t alter or expand their diet. Both Slimes can be found in Rainbow Fields and Ember Valley.

The original Tabbies are carnivores that need to eat meat in order to survive, but the Largo combo makes them vegetarians. Cotton slime and Tabby slime are used to make this combination. Both Slimes can be found in Rainbow Fields.

This largo is an easy and smart combination of a Flutter Slime and a Honey Slime. This largo provides a ton of largo, especially if players feed it with Nectar and Fruit. Both Slimes can be found in Starlight Strand.

This largo is made out of an Angler and Crystal Slime that offer a beneficial combo that can provide a profit and crafting materials. They are also another dangerous combination that may require some Plort Harvesters. Angler Slimes are found in Ember Valley and Starlight Strand, while Crysal Slimes are in brown and cave areas of the Ember Valley.

This largo is a dangerous mix because but can be used to make things and Newbucks. In addition to making it easier to provide for them, this pairing also serves to increase their trait diversity. Rock Slime can be found in Ember Valley and the purple areas of Starlight Strand, while Boom Slime are located in brown and cave areas of Ember Valley.

The Ringtail and Hunter slime are so similar that they make a fantastic pair Largo. Together, they can eat a wider variety of foods and generate twice as many valuable plorts. This largo has a limited, easily met dietary need of largely meat, fruit, and vegetable. You can find Ringtail Slimes in both Ember Valley and Starlight Strand. To avoid seeing them as statues when exposed to light, explore caves or at night. While hunter Slimes can be found in the pink areas of Starlight Strand.

When it comes to plorts, Crystal and Ringtail Slimes are among the most valued due to how easily and quickly they can be used to produce Newbucks. If you’d rather make a profit from selling your plorts than mining them for resources, combining the two is the way to go. This combination is also easy to care for, thanks to the Ringtail’s adaptability with food.

Slime Rancher 2 is out now for the Xbox Series X|S and PC Via Steam. For more news about the game, visit their main website.

Check out this video guide by Blitz to see all the Slimes and what they are in Slime Rancher 2.