Slime Rancher 2 Slimes: All Types & Where to Find Them 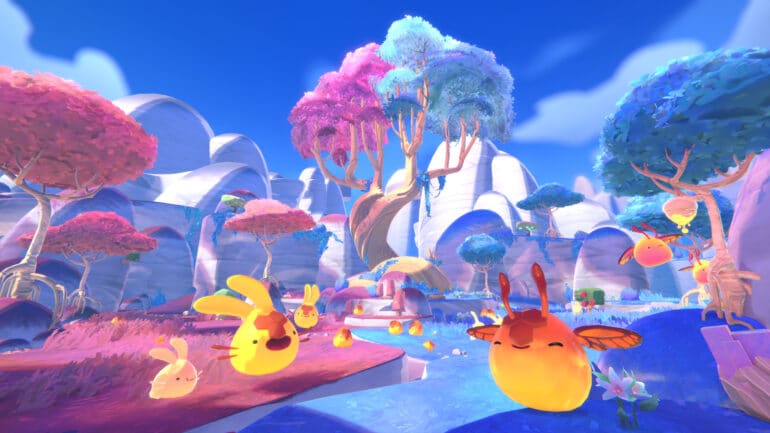 Prepare to collect a wide variety of Slime Rancher 2 as you travel over the breathtaking landscape of Rainbow Island with Beatrix. Learn about the new and returning slimes in Slime Rancher 2, including where to find them, what they eat, where they hang out, and how much money you can make off of their plorts with this guide, so read on.

There are 18 types of slimes that can be found in Slime Rancher 2. These slimes can be caught and used as resources for crafting tools, upgrading your farm, and more.

Description: Unlike other aquatic-type slimes, the Angler Slimes do not need water to live and be Largo’d. They have a unique skill that will occasionally release a blinding flash around them that stuns nearby slimes and chickens, rendering them unable to move for a few seconds

Description: A new type of Slime found in Slime Rancher 2 is the Batty Slime. This slime is very aggressive during the daytime but at night, they are less. They are usually found in caves along the map and love to eat pomegranates. They also grow hungry at night and eat more often than other slimes

Description: Explosive and deadly are the Boom Slimes. This harmful slime needs to be taken care of properly or else, it will harm you. They are constantly building toward an inevitable explosion, making them quite hazardous to ranchers. In addition to those explosions causing bodily harm, they also have the capacity to send all nearby slimes flying into the air, making them a hard slime to corral.

Description: A very bouncy slime that resembles that of a bunny. It is a new slime that has debuted in Slime Rancher 2 and is one of the most common slimes to be found around. It loves to eat tons of vegetables and can produce resources if it is taken care of properly.

Description: Shiny and hard is the best trait to describe the Crystal Slime. They are considered to be very dangerous and can create sharp spikes on the ground for a minute or until dispersed with water.

Description: Feral Slimes are subspecies of Largo Slimes. In particular, slimes that go too long without food transform into Feral Slimes, and will become hostile to Beatrix. Unlike other slimes, Feral Slimes don’t have offsprings and can be readily satisfied by food. Feral slimes can also have plorts when fed.

Description: Fire Slimes are combatant-type slimes and they can only survive in an Ash trough of an Incinerator. If it is anywhere else for too long, it disappears. Its plorts are most often used in upgrading crafting machines and more and is a must-need item for players to collect.

Description: Another slime that debuts in Slime Rancher 2 its shape is based on a butterfly and its look is stunning and beautiful. It can be hard to keep a Flutter slime happy as their food is quite rare as it eats Moondew Nectar and love living in a sky net on its corral. When they eat, they release a cloud of scales that soothes nearby slimes, reducing their agitation.

Description: Like the Lucky Slime, it’s very rare to be found and can appear in any location. they eat pretty much anything put in front of them. Instead of Newbucks, you’ll be rewarded with a Gold Plort, which is the most valuable by far and cannot be fed to another slime.

Description: Huge Gordo Slimes often sit still in one place, barricading the entrance to a passageway or an area that contains something valuable. The only way to get rid of them is to stuff them with so much food that they explode, but they are otherwise immobile and untouchable. A Gordo Slime’s diet is identical to that of the slime it is created of, however it does not produce plorts.

Description: As sweet as its name is, they are very valuable for the Newbucks collection, as their plorts sell for relatively high values. As valuable as they are, they are rare to find along the Starlight Strand and love to eat fruits, especially Mint Mango. Farming with Honey Slimes is considered important if players are short on funds.

Description: A carnivore-type slime that is rare and valuable at the same time. They can appear invisible and their Largo variants always spawn feral. They can occasionally attempt to pounce at the player, indicated by wiggling before making a jump in her direction. The Slime will turn invisible during its wiggle, leaving only its eyes and mouth visible.

Description: Largo Slimes are larger slimes that have devoured a plort they do not generate, making them grow and take on traits of the producer of that plort. When fed, Largo Slimes will spawn not only its native plort, but also whatever kind of plort it consumed to transform into a Largo. Largo Slimes will have two of each plort if they are fed their preferred foods.

Plorts can be farmed most efficiently with these slimes as well since they require fewer corrals and have a wider variety of their preferred food to eat, making it easier to harvest a high yield.

Description: Very rare to be found and can appear in any location, the Lucky Slime resembles the lucky Chinese Cat. By feeding a Lucky Slime any meat item, you will be rewarded with some Newbucks, but they don’t stick around for long and despawn quickly.

Description: Another common slime to be found in Slime Rancher 2. However, this slime can only be found during the night and can not be spawned during the day. It is easily identified by its violet coloration, wings, and soft bright glow, and must be kept in a corral with the Solar Shield upgrade.

Description: Among all the slimes found in Slime Rancher 2, this slime is the most common slime to be found in the game. They love to eat anything and this slime can be fused with other slimes to produce plorts and resources that players need to explore and upgrade their farm.

Description: Like the Flame Slimes. they are combatant-type slimes. It’s a great slime to have and they are needed to be housed in a pond if they are to survive, but they don’t need feeding as they live off the very water they float in. This slime cannot be turned into Largos as they don’t eat plorts, nor can their plorts be consumed.

Description: Warning, this slime is too adorable to catch. Nosebleeds will occur after a few interactions with it. This slime is similar to that of a raccoon and requires special care during the daytime as they turn into stone literally. Ringtail slimes will eat anything but when they are not hungry at all, they will not produce any plort at all.

Don’t let its looks fool you. This adorable slime is far more innocent and is only dangerous due to its playful nature and harsh forms. Though it’s a dangerous one, it is considered as one of the best slimes to use to gather plorts and resources. Plus, fusing it with other slimes will give players a level of expectation that no one ever expected.

Description: This slime is adorable and at the same time, squishy for its features resemble that of a kitty. It has a cute persona that makes players including myself hug it so bad and never let it go. Tabby Slimes are also one of the most common slimes in Slime Rancher 2, along with the Rock Slime, both second only to the Pink Slime.

Description: Tarr Slimes are hostile slimes that consumes another slime to produce more of its type. Tarr slimes, for example, are created when a largo consumes a third plort type that is not of its own type; these slimes then transform into a hostile variety that devours all other slimes in the area and may harm you if you come too close to one.

A simple method of eliminating Tarr slimes is to pick them up with the vac and hurl them into the water. If you prefer a less serious adventure, you can turn off Tarr Slimes in the game’s settings.

Also check out this video by GaroShadowscale featuring all slimes found in Slime Rancher 2: