How to Complete The Trials of the Lakes | Pokémon Legends: Arceus

Learn how to breeze through the trials of the lakes. 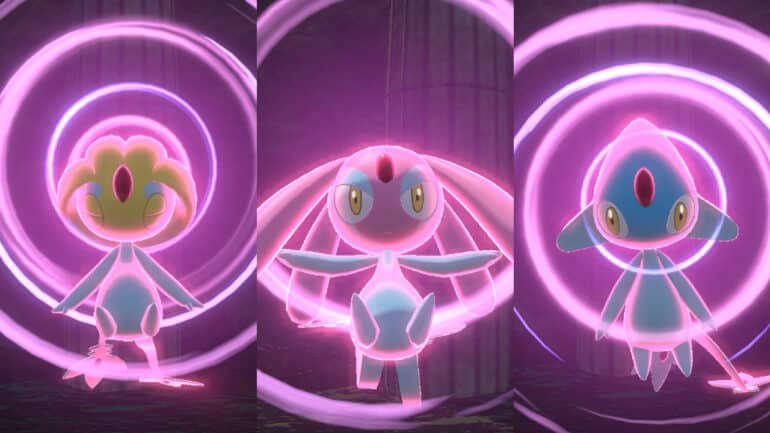 One of the quests in leading up to the climax at Mount Coronet is The Trials of the Lakes. In these trials, you will meet the legendary lake guardians of Sinnoh whose guidance you will need to defeat the legendary Pokémon of creation.

In this guide, we’ll walk you through the quests and help you overcome the trials of the lakes.

How to unlock the Trial of the Lakes quest

After meeting Cogita for the first time, she’ll tell you about the knowledge that was passed down to her. According to her, you will have to go to the three lakes in the Hisui region and pass the trials that will be given by the Pokémon that reside in them. Only then will you obtain the Red Chain, an item which will be needed to face the rampaging Pokémon at Mount Coronet.

How to Complete The Trial of Lake Verity

Lake Verity is located at the west part of the Obsidian Fieldlands. At this point, you can simply fly southwest from the base camp with your Braviary. In the middle of the lake is an island. Approaching the front part of the cave will trigger a cutscene with Volo and the clan leader you chose, so it’s best to save before doing to.

After the cutscene, the entrance of the cave will then be opened, allowing you to enter it.

Upon entering the cave, you’ll first have to defeat a level 58 Alpha Hisuian Goodra. A Hisuian Goodra has a Dragon/Steel typing, so Fighting or Ground type attacks will be super effective against it. As it’s a regular alpha, you can also catch it instead.

Once the battle is over, Mesprit will then appear before you. It will ask you to share your emotions based on the scenarios that it will provide. Choosing any of the options provided will not have any difference on the outcome. Answering all the questions will then complete this quest and reward you with Mesprit’s Plume.

How to Complete The Trial of Lake Valor

Go to the Crimson Mirelands and fly towards the north east where Lake Valor is. Similar to before, engaging with the cutscene will open the entrance to the cave in the middle of the lake.

You’ll first have to defeat a level 58 Alpha Overqwil, which has a Dark/Poison typing. Using Ground type attacks will be super effective against it. It can also be captured and can be used to complete The Sea’s Legend quest.

Azelf will then appear and will challenge you to try and hit it with balms. No matter how good your aim is, Azelf will just dodge them or the balms will just pass through it. Just choose to not give up every time it asks you and you will eventually complete the trial after a few rounds. After this, the quest will be considered as complete and you’ll be rewarded with Azelf’s Fang.

How to Complete The Trial of Lake Acuity

Go to Lake Acuity which is at the north side of Alabaster Icelands. Similar to the two lakes, engage in the cutscene to open the entrance to the cave.

You’ll then have to defeat a level 58 Alpha Hisuian Zoroark, which has a Normal/Ghost typing. Using Dark type attacks will be super effective against it and it can also be captured.

Uxie will give you a riddle that will test your knowledge about other Pokemon. The riddle will ask how many eyes do a Combee, a Zubat, an Unown, a Magneton, and a Dusclops have in that order. You also have to provide the answer as a string of numbers and not the total number of all the eyes. The answer to solve this riddle is 60131. Solving this will complete the quest and will reward you with Uxie’s Claw.

Once all the trials of the lakes have been completed, you’ll then have to travel to the Shrouded Ruins at the Crimson Mirelands, and from there you’ll get the Red Chain from the lake guardian trio.

How to catch Mesprit, Azelf, and Uxie

The three lake guardians Mesprit, Azelf, and Uxie can then be caught post-game or after finishing the entire main story. After going through the credits, report back to Captain Cyllene. She’ll evaluate your Pokédex, which is still incomplete at this point.

Volo will then arrive to offer his help and will invite you to go to the heights camp in the Obsidian Fieldlands. He’ll show you the ancient carvings just behind the camp and suggests that searching for the other legendary Pokémon will lead them to find the remaining plates that are still still hidden in Hisui.

You’ll then visit Cogita again, who will tell you about the other legendary Pokemon and where to find them, including the lake guardians. Revisiting the respective lakes at this point will allow you to have an encounter with each of the lake guardians where you can get the opportunity to capture them.

All three guardians are Psychic types, so using a Dark type Pokémon that learned the False Swipe move is the best choice if you want to capture them. Prepare at least 30-40 Ultra Balls per guardian and make sure to use attacks that leave status debuffs such as paralyzed, asleep, or frozen.

Check our this guide made by JohnnyCanal on how to catch the lake trio: