V Rising Clive the Firestarter Location & How to Beat

A guide on how to defeat Clive the Firestarter in V Rising. 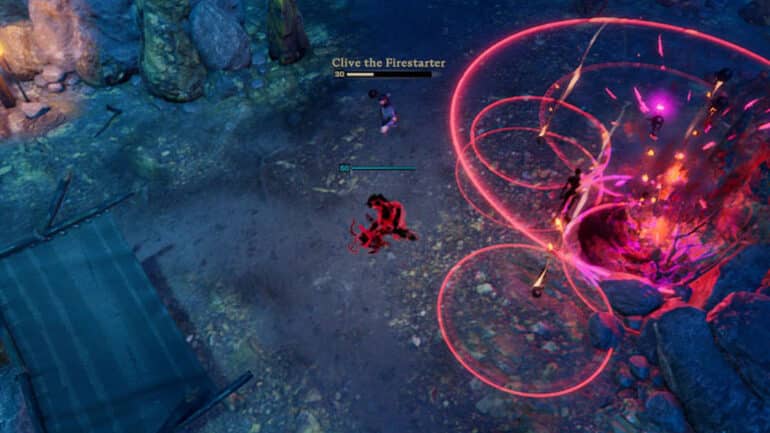 V Rising Clive the Firestarter is one of the bosses that can be fought in the game. He specializes in explosives and chucks them at his opponents to blow them into smithereens. Because of his expertise in mixing concoctions, defeating him will grant the knowledge of creating beneficial and harmful reagents at the player’s disposal.

In this guide, we will talk about how to prepare and win the fight against Clive the Firestarter.

Clive the Firestarter can be found in the Bandit Sulphur Quarry at the west side of the Farbane Woods. The quarry has explosives littered everywhere, so be careful when standing next to one, or you might get blasted.

How to beat Clive the Firestarter

To defeat Clive the Firestarter, first make sure to level up your total gear level to at least 30. You can equip these gear:

It’s recommended to use the Hunter’s Crossbow if you are good at aiming to keep the damage uptime since you’ll be avoiding his bombs’ explosion range most of the time. Going for a more aggressive melee approach is only recommended if you have other abilities that provide movement, for example the mace’s crushing blow or the slasher’s camouflage.

If you are fighting Clive for the first time, it’s recommended to use the following abilities:

Clive can limit the playing space just by bombarding it with his explosives, so it’s important to take note of the attack patterns and timings of the explosions.

Cluster Bomb: He will lob a bomb up in the air which explodes once it reaches the ground. It will then split into three more bombs, and then explode once more as it splits into six more bombs. This attack will cover a lot of ground, so it’s best to position yourself in an open space and avoid boxing yourself in a corner.

Big Bomb: He will roll away to another spot, leaving behind a big bomb that has a wider blast radius, but it also has a longer wick. At below 50% of his health, he can drop several big bombs at a time. Thanks to the longer wick, you’ll have more time to react, so as soon as you see him roll, you also have to move away from where he was standing at.

Rewards in Defeating Clive the Firestarter Boss in V Rising

Defeating Clive the Firestarter will unlock the following:

Check out this video by NexxTV showing how to defeat Clive the Firestarter: