A Plague Tale Requiem Walkthrough Chapter 3: A Burden of Blood 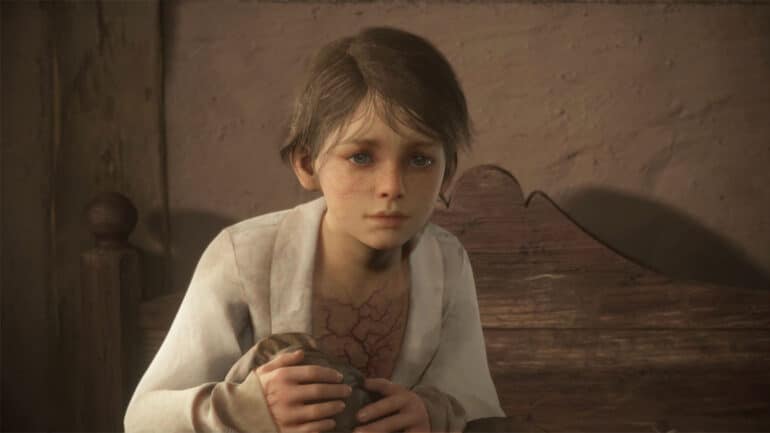 A Burden of Blood is the third chapter in A Plague Tale: Requiem that follows the journey of Amicia and Lucas trying to find an herb to help calm down Hugo’s seizures. What was supposed to be a quick trip to fetch the needed herb turned into another encounter with the guards who have been purging parts of the city unbeknownst to the public.

In this guide, we will go through the walkthrough of chapter 3: A Burden of Blood, of A Plague Tale Requiem, showing some tips, tricks, or solutions on how to complete the chapter.

A Plague Tale Requiem: A Burden of Blood follows the story of Amicia and Lucas sent off by Beatrice to bring back nightshade to help cure Hugo’s seizures. They try to make their way out of the city to meet the herbalist, but the path ahead is blocked.

As the two try to head out and visit the herbalist, guards have been blocking the city streets and keeping everyone inside their houses. Lucas will find a way through the backstreets, however this leads to the butcher’s dump. Make your way through the dump, then slip the gap through the fence on the right. Make sure to loot the chest as you will start getting Pieces for upgrades.

Next, move the cart out of the way. As you go down, the rats will start showing up on the surface again. Light up the braziers along the way. As you get inside a house, you can shoot a hanging carcass, but the rats won’t come near it because of the light. You will need to snuff out the light first by shooting at the bag of saltpetre, then the rats will come for the carcass.

You can then head to the next lit section. Move the cart towards the flame to the right, then shoot the hanging carcass, then the saltpetre bag to lure the rats away again. Head up the stairs, then check the left side first to see another chest with pieces. Head to the lit room and grab the knife from the pig’s had as you will need one later on.

As you jump out, you’ll encounter a soldier. Hit him with the sling quickly to avoid getting hit.

Move forward where you will have to make your way through the streets guarded by soldiers and filled with rats. At this point, you will learn how to craft Exstinguis, an ammo made from saltpetre to extinguish fires. You can use this ammo to shoot at torches held by guards, braziers, or fire lamps.

Moving forward, you will need to shoot the guard’s torch to make the rats swarm over him and clearing your path. The next guard is up high and is holding a torch while standing beside a lamp. You can shoot both flames, or you can aim for the saltpetre bag below to snuff both at the same time. Before going up, head to the path to the left to get more pieces and then grab a stick to light up.

Go up the stairs, light up the braziers and the lamps, and then make your way to the other side where there is another chest containing more pieces and a tool, another material needed for upgrades.

You’ll arrive at a point where two torched guards appear. You’ll then learn how to create a exstinguis pot, which you can then lob in between the guards to snuff their torches at the same time.

You can then climb up where the crank for the gate is. After turning it, you have to make a beeline towards the gate before it closes. You’ll then arrive at the forest.

Make your way to the first house where you’ll find a workbench. You can use your collected pieces and tools in here to upgrade your sling and other gear.

The forest will be full of patrolling guards, so you will need to sneak through the bushes and houses carefully to avoid detection. Head to the house at the right first where there’s a chain that can be broken. This reveals access to a garden where you can find the A Grave souvenir. Then, you need to head down the ladder within the next house and then head out and grab the nearby chest.

You can head towards the next house via the window, however you will need to be prepared for an encounter and try to hit the guard inside the house quickly. You can also try to go through the rats and around to the door where you can lob an exstinguis pot to snuff the torch and let the rats take care of the guard. Afterwards, grab a stick and light it, then make your way to the cow carcass.

From the carcass, light a fresh stick then head to the house to the left where there’s another chest. You’ll then see two more guards outside by the campfire. You can either lure the guards to the tool chest to the left then shoot the saltpetre bag, or just lob an exstinguis pot at the campfire.

You can then enter the chapel through the window. Inside are a bunch of loot and materials that you can pick up. Exit the chapel and snuff the torch of the guard by the graves to the right.

Saving the herbalist is optional and will not cause any other consequences down the story aside from a different dialogue line from Lucas. In order to save the herbalist, you must rush to the bush nearest to the door where they are coming from. Then, time your ignifer shot towards the torch once the herbalist is within its light’s range. Then, quickly do a head shot on the helmetless guard which should cause the other armored guard to inspect your position. As he moves through the rats, quickly shoot his torch with exstinguis to have the rats swarm him.

If you fail your timing, you can reset by dying, but only do this as long as the herbalist is alive; once the herbalist is dead, you will have to redo the entire level instead if you want to save him.

The gate to the herbalist’s house will be locked, so you need to head tot he left by jumping over the log. At the end of the path, move the plank to reveal a hole you can go through.

You then have to find the nightshade plant within the garden. There are several spots that you can check and eventually Lucas will suggest that you check inside the house. Before doing that, make sure to check the hanging pots at the tree as one of them carries the Chamomile herbarium collectible.

As you get inside the house, you’ll discover that there are loads more guards on the other side. Lucas elects to go fetch the nightshade plant on his own, but he then gets caught by the guards.

You then have to sneak through the bushes again and past the patrolling guards. You will need to head to the far left side of the garden where you’ll see a chest and a ledge that you can climb up on. Proceed through the plant beds and hide underneath the tables to avoid the guard. Make your way to the next door into the greenhouse.

Once inside, quickly hit the guard that’s about to hurt Lucas to save him.

You’ll then get stormed by alerted guards Make sure to aim quickly and defeat the guards. There will be shielded guards that come in that can block rocks. You need to shoot the saltpetre bags once they are near to blind them and open them up for a headshot. Eventually, the guard captain will come in and arrest Amicia and Lucas.

Escape from the dungeon

While in the dungeon waiting to be executed, Lucas comes up with a plan. You can then tell Lucas to use Stupefacio on a flame to blind and stun the nearby guards. You do so to escape the guards and escape the dungeon via a tower’s window.

Once you are on the rooftop, head to the right where a ledge is and walk all the way across. Climb up and sneak past the first guard that you see and continue to the other side of the tower. Use stupefacio again on the next brazier to blind the guard and get through the path.

At the end of the path, head to the right and jump down the ledge. Head to the next tower and hide under the table as the guard passes by. Once it’s clear, head upstairs and outside towards the door to the depot.

Once you are in the depot, head to the opposite side and to the left is your sling. Then, check to the right where you can use a knife to pry open a lock to reveal a workbench. Lucas will also find the stash of nightshade. Retrace your steps to the middle of the room and to the right is a chain that can be shot to lower a bridge. Climb up and cross this bridge to reach the Our home souvenir.

Find a way to create a diversion

As you peek through the door, you’ll see that there are way too many guards to sneak past through. Lucas comes up with an idea to use the hanging ballista and shoot out a huge stupefacio. You will need to reach the crank that lowers the ballista first.

Head back to the middle of the room and move the brown cabinet out of the way to reach a cart behind. Move the cart over to the ledge near the workbench, then climb up to reach the crank. Have Lucas turn the crank and lower the ballista down. Once you see the chain link at the end, shoot it down to release the chain. Then, push the ballista towards the door where Lucas will prime it with stupefacio.

A cutscene will play showing that the plan works and the guards are distracted. The two successfully return back to their home in time for the magister to work on healing Hugo.

Here are the trophies that can be obtained in Chapter 3:

Check out this video by TetraNinja showing gameplay for Chapter 3 – A Burden of Blood: