A guide on how to get all the Last Wish Raid Wishes in Destiny 2. 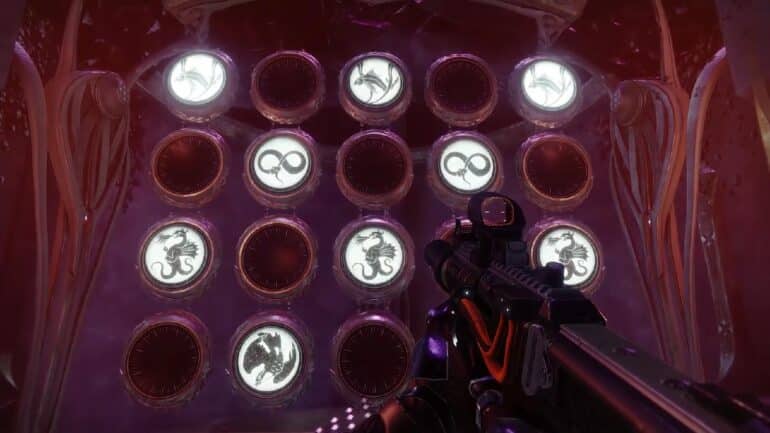 Ever since the Last Wish raid went active a few years ago, a lot of Guardians took on its challenge. The raid puts players into several boss encounters while having to deal with different gameplay mechanics to avoid a team wipe. Throughout the years, the Last Wish raid has been conquered for several thousands of times now, but there’s still one more thing about it that is still left unsolved.

Along with the raid, there is a secret area in the Dreaming City that houses the Wall of Wishes. It was made to serve as a fool-proof way to make a bargain with the Ahamkara Riven. It is a wall with 20 circular panels arranged in a grid pattern. These panels light up and cycle through 16 different images of fish, snakes, hawks, and dragons when they get shot.

When the right symbols are arranged in an exact pattern across the grid, a player can then stand on top of the circle in front of the wall and they will receive a particular “wish”. These wishes range from effects, keys, and other special items, and it can also be used to teleport the player and their fireteam to different parts of the raid, effectively skipping some of the bosses.

All Destiny 2 Discovered Wishes for the Wall of Wishes

So far, despite all the efforts of the Destiny 2 community throughout the years, there have been only 14 out of the total 15 wishes that have been discovered. These combinations were found printed on round plates, most of which were found in different spots in the Dreaming City and some were found in other regions. One particular combination was found not in the game’s overworld itself, but in a cutscene. More about the 15th wish later on.

This wish grants the player an Ethereal Key that can be used to open one of the chests at the end of the raid.

This wish will cause a chest to spawn somewhere between the Morgeth fight and the Vault. It can only be opened with a Glittering Key, which drops form defeating Riven.

This wish will teleport the fireteam to the beginning of the fight against Shuro Chi.

This wish will teleport the fireteam to the beginning of the fight against Morgeth.

This wishwill teleport the fireteam to the beginning of the Vault encounter.

This wish will teleport the fireteam to the beginning of the fight against Riven.

This wish will play the Hope for the Future song.

This wish will add Failsafe’s dialogue to the raid.

This wish will add Drifter’s dialogue to the raid.

This wish will add an explosive effect to headshot kills, similar to the one in Halo 2.

This wish adds a wreath of flowers on the player’s head when taking a selfie.

This wish enables the Extinguish effect. If any player in the fireteam dies in any part of the raid while under this effect, the entire team will be booted out of the raid and the raid will be reset.

This wish spawns Corrupted Eggs in the raid that can only be destroyed when shot at by the Wish-Ender, a unique bow that can be obtained from the Shattered Throne Dungeon. Once eggs are destroyed in an account, the will no longer spawn, so breaking eggs can be done in batches. Breaking all the eggs will reward the Taken Omelette triumph.

What is the Fifteenth Wish?

Despite the numerous amounts of searching, datamining, and speculating done to figure out what the Fifteenth Wish is, nobody has figured out what it is or how it can be obtained. Even its real existence is being questioned; the only evidences that point out to the Fifteenth Wish’s existence are the triumph associated to getting it and its API being in the game’s code.

The obvious route is to brute-force the wish by trying out all the combinations until something clicks. On paper, it’s a sound way to crack the code, but in reality, people have to sift through 1720 or 4.064 septillion possible combinations. As one mathematician who tried to put that number into scale said, and we paraphrase: even if a code is tried per second ever since the universe began 13.6 billion years ago, we would still be at 0.0000001% of the way there to this point. In short, it’s ridiculously improbable for someone to just crack the code in a lifetime.

Even knowing those odds, there still are definitely some fans trying to sift through all of those combinations until now. The interest about searching for clues about the Fifteenth Wish comes and goes in every update of the game in the hopes that some piece of information, texture, or asset shows up that will point to the elusive wish.

Check out this video by evanf1997 which is pretty much a documentary about the Last Wish Raid Wishes: